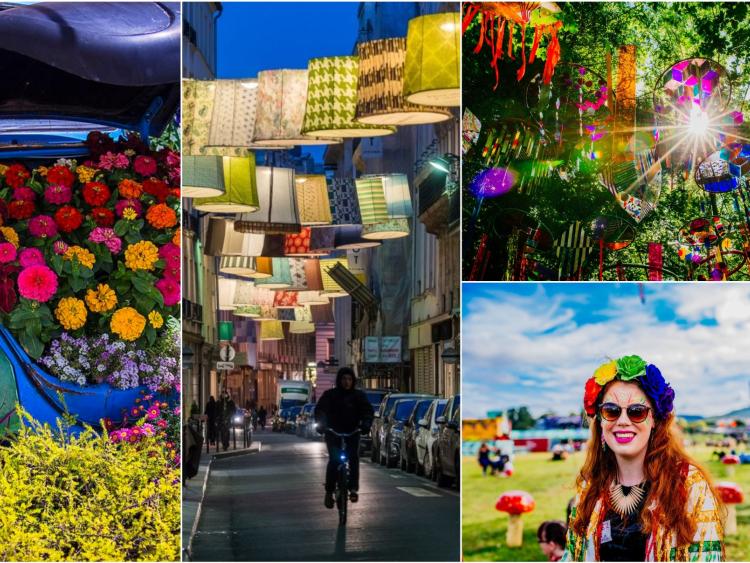 Portlaoise is in for a flower power makeover this August in a new move by local businesses to promote festivals in Laois.

The trader's group Downtown Portlaoise has set out a new joined-up-thinking approach on how Portlaoise can be the poster for festivals happening all over the county by flagging events in a creative way.

Alsion Browne of Gerry Brownes Jewellers, Ladonna McCartan of The Pantry and Nook and Cranny and the Downtown Portlaoise committee are leading the way with a new project that will see lampshades, creative costumes and even a fully decorated Volkswagen Beetle pop up around the town centre to highlight Electric Picnic.

The aim is to add a splash of the Electric Picnic feeling into Portlaoise so people know they have landed in the home of one of Ireland’s biggest music festivals when they are in the town and to show support for the festival, sharing the positivity and the economic boost it brings to local businesses.

A plea for donations of lampshades which will be hung up across Main Street and Lyster Square had a massive reaction online. Other colourful plans are also in the pipeline according to Alison Browne.

“It is a decision we have made as a county town that we are going to try to tie in any festivals that are on in Laois and display them in Portlaoise if people are around town it will highlight what is happening in the rest of the county.

“We have decided to do up the street to tie in with Electric Picnic this year. The theme is a flower power vibe and also reusing and recycling. The idea is to string lampshades across parts of the street and up in trees and we are using some of the local student’s Junk Kouture outfits on mannequins around the town.

“We have purchased a Volkswagen Beetle and we are going to cover it in flowers to decorate it. All of this is to alert people passing through Portlaoise or arriving into Portlaoise that the festival is on and to show that Laois is embracing and loving its festivals.

“We put out a plea for lampshades and we have had a great response. We were searching for flower power ideas and we came across the Volkswagen Beatle and I personally bought a soft-top one for a good price. We are going to cover it in flowers and have it on display in the town to catch peoples’ eyes.

“We are updating our viewpoint on business in Laois, we don’t like the thought that other towns think everything is in Portlaoise. We see all festivals in the county as a boost to business and we are having a more joined-up thinking approach to promoting these festivals now and supporting them,” she said.

It is planned that the decorations will be up around the town by mid-August and will stay up for a week or two after the festival which takes place from August 30 to September 1.

Anyone who can donate old lampshades of any kind to the project can drop them into The Pantry Café or Gerry Browne Jewellers before August 7.

Other festivals they would like to get creative with in future include the Stradbally Steam Rally and Durrow Scarecrow Festival. Downtown Portlaoise welcomes any Laois festival organisers to contact them about a similar project.

MORE: Sadness in Laois following the death of a brave little boy