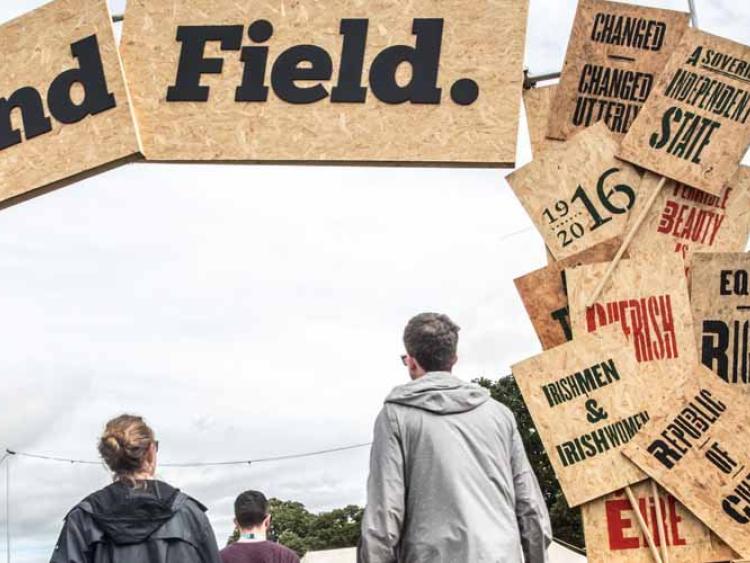 Feed your mind in Mindield

The brainy bit of Electric Picnic, the MindField lineup has been announced and it has everything from Blindboy Boatclub and Waterford Whispers to the global climate and Ireland's place in Europe.

There is a rocking Irish tent too where Liam O Maonlai and Sibéal Ní Chasaide are among the music performers.

"There will be tough questions, inspiring answers, heated debate, huge laughs, provocative ideas, heart-breaking poetry, compelling podcasts, magnificent speeches, mind-blowing science, transcendent theatre, soaring literature and the beauty of an teanga Gaeilge and much, much more all set among the uplit trees of the MindField arena with its top class food and drink experiences. A true feast for all the senses" the organisers say.

Highlights in the Leviathan tent include speed debating with Salon du Chat; a retrospective of The Doris/ Magee films; the Irish Research Council presents: The Lives of Others and Populism with prominent members of the Traveller community, Dr. Sindy Joyce and Martin Beanz Warde; national treasure Miriam O’Callaghan hosts her annual Sunday Brunch with guests casting a jaundiced eye on the newspapers; and the story of Waterford Whispers News is told to Dr. Gunther Grun by its creators. The EUandMe programme presents two discussions on innovation and climate in Europe; Amnesty Hour looks at a New Way to Welcome Refugees hosted by Colm O'Gorman; Paddy Cullivan enjoys The Joy of Brex; and History Ireland Hedge School looks at the Emergency: 80 Years On and Censorship in Ireland: Then and Now. Leviathan hosted by David McWilliams looks at real solutions to climate in Ireland with a world class panel of experts.

The new Manifesto stage features legendary comedy producer John Lloyd (Blackadder, Spitting Image, QI) in conversation with Blindboy Boatclub; Notes from An Apocalypse - Mark O'Connell in conversation with Dr. Niamh Shaw; Cathy Davey and her rescue animals; the World’s Worst Book Launch with Saul Tillock and Dr Günther Grun; Paul Howard presents Ross O'Carroll Kelly's Guide to Electric Picnic. Dr. Niamh Shaw delves into the wonder of human existence with Luke O’Neill in Humanology; and In Our Fragile Selves: Sinead Gleeson and Emilie Pine discuss the inspiration behind their breathtaking essay collections with comedian and activist, Tara Flynn; while in To Be Transhuman: Mark O'Connell is in conversation with Professor Luke O'Neill;

The Ah, Hear! Podcast Stage returns to Mindfield for the second time this year, expanding to a bigger tent and featuring some of the biggest Irish podcasts making their Electric Picnic debut. The line-up has been curated by Soundings host and BBC podcast commissioner Dylan Haskins and features special live recordings of Second Captains: The Player’s Chair with Richie Sadlier, The Laughs of Your Life with Doireann Garrihy, It Galz, The Alison Spittle Show, The David McWilliams Podcast and comedy improv show Phoning It In. The Blindboy Show will kick of proceedings on both Saturday and Sunday afternoons with comedian Jason Byrne at midday on Sunday, while Sam Bungey and Jennifer Forde, hosts of the hit true-crime podcast West Cork will discuss their work, latest updates on the case and why their podcast has captivated audiences across the world. Andrea Horan and Una Mullally also bring their recently launched podcast United Ireland to the festival with a special episode laying claim to Electric Picnic as the 33rd county of Ireland.

The Theatre Stage - presented in association with Dublin Theatre Festival presents Choy Ping Clarke-Ng’s Where Are You From?; Breadline Collective’s Well That's What I Heard; The Word Up Collective with Emmet O'Brien, The Poet Geoff, bold new feminist voice Sarah Richardson and rapper Max Zanga from Tebi Rex; Fionntán Larney & Dominic O’Brien with Beat, a new rap musical; Fionn Foley with Brendan Galileo for Europe currently at the Edinburgh Fringe; One Two One Two’s Everything I Do featuring Zoe Ní Riordáin who received the award for Best Performer at the Dublin Fringe Awards; Awake and Sing with their Hue and Cry - a revival by Awake and Sing Productions (From Eden, Northern Lights) which played at Bewley’s Café Theatre earlier this year to rave reviews; and acclaimed spoken word artist Natalya O'Flaherty who brings her show to Electric Picnic for a summer festival exclusive performance.

The Word Stage returns again this year with its most varied up line-up to date, hosted by Marty Mulligan, it will be a non-stop mixture of rap, hip hop, grime, trad, spoken word, storytelling, poetry, cutting edge comedy, funk, folk, soul, slam poetry and rock and roll.

Friday night will feature some of the top up and coming grime and rap artists from the U.K. with sets from L Plate, Pupils of The Clock and Detax playing it loud and heavy. Lots of live music on offer this year with festival favorites Good Man Sheila and Cronin plus special guests ready to whip the crowd into a frenzy on Sat and Sun night. The Word Stage will also be getting deep down and funky on sat night when The Clare Sands Band, Bobby and The Blunts and Backroad Smokers Club do their Irish funky thing onstage.

During the day we will be easing the hangovers with some storytelling, poetry and comedy with Candlelight Tales, Lewis Kenny, Colm Keegan, Amusings, The Galway Ukers and many many more, building up to dulcet tones from the likes of Good Strangers, Aine Tyrrell and Hussy Hicks from Australia. On Sunday we will play host to the biggest céilí band to ever play the Picnic as The Mullingar Fleadh Ceoil 2020 group take to the stage.

Sunday night we close up The Word Stage with a rip roaring high octane trad set from Ruaile Buaile, then we’re all off to get lost in the woods and the madness of it all.