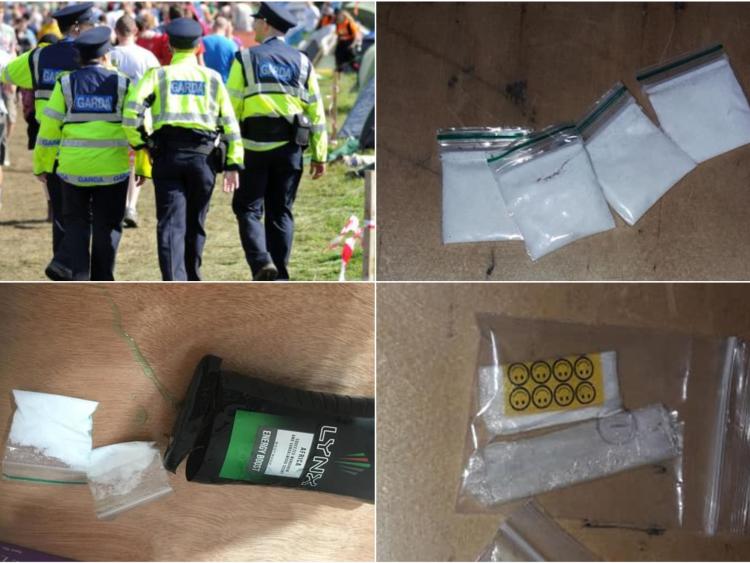 Gardaí made a number of drug seizures 'within minutes' of Electric Picnic early entry opening at 4 pm on Thursday.

Gardaí say that cocaine, ketamine, LSD and MDMA were seized on Thursday.

"Electric Picnic gates opened at 4 pm Thursday and within minutes a number of seizures of illegal drugs have been made.

"Gardaí are carrying out searches and are reminding people attending that any seizures made will have consequences for the individual.

"Keeping people safe and free from harm is important. Cocaine, Ketamine, LSD, MDMA have been seized so far today," they said.

Gardaí have issued a number of stark warnings against the use of illegal drugs at Electric Picnic this year including the following message:

"We need to get this message out there. Social media commentary would leave us all to believe that drugs are harmless and Gardaí and right-minded people do not have any idea regarding drugs.

"Those individuals that say such things have never lost a loved one, seen a son, daughter, father or mother, brother or sister die from drug abuse or overdose. Nor have they had to break the news to a parent or family.

"If you have someone attending the Electric Picnic this weekend share the message with them and remember we might not catch everyone but when we do catch people we potentially have saved their and their friend's lives.

"An Garda Siochana are warning festival-goers attending #ElectricPicnicthere will be a high-visibility police operation at the event, targeting the use and supply of illegal drugs. We will be there to uphold the law.

"Those who bring illegal drugs into the festival can expect to be caught and dealt with accordingly.

"Prohibited drugs are illegal and potentially life-threatening, especially when combined with alcohol, so we urge everyone to behave responsibly.

"We will be there to uphold the law and ensure the safety of all festival-goers.“

"If you are attending any events or music festivals remember the following. Many illicit drug users may think that the only bad thing about doing drugs is that they are illegal. The truth is there are negative health effects associated with every illegal drug out there and some of them can be fatal. Don’t consume illegal drugs. Your need for a high can leave a family devastated."