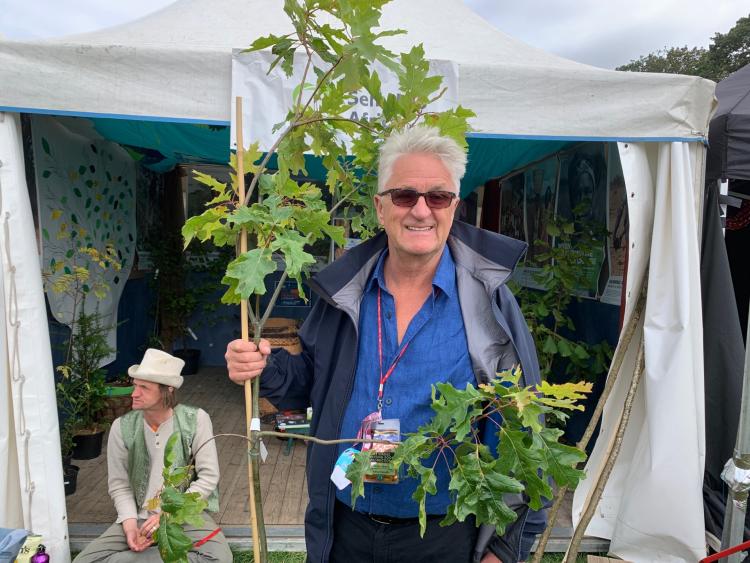 Melvin Benn, Managing Director of Festival Republic, 'Hugs a Tree to Plant Three' with Self Help Africa, at the weekend's Electric Picnic Festival in Stradbally.

An Irish charity that promoted ‘tree hugging’ at this year’s Electric Picnic festival has pledged to plant a tree in Africa for everyone who attended this year’s event.

Self Help Africa says that it will plant 57,500 trees in sub-Saharan Africa, as a post-festival gift to those who attended the Stradbally event.

The organisation, which supports agricultural development projects across Africa, staged a “Hug a Tree and We’ll Plant Three” activity at this year’s festival, and is now planning to do much more on behalf of picnickers.

“Close to 1,000 festival goers joined us over the three days of Electric Picnic to ‘hug a tree’, but many more also came up and said that they loved what we were doing. We decided that we’d increase the scale of our picnic planting activities, so are organising to plant a tree in Africa for everyone who attended EP,” said head of communications, George Jacob.

Self Help Africa’s ‘tree hugging’ was a bit of fun at Electric Picnic, but it also provided an opportunity to talk about more serious issues – including the effects of global warming on the poorest and most vulnerable people in sub-Saharan Africa - and also the important role that trees play in peoples daily lives.

“In Africa, the trees that we are planting are not only a means of offsetting carbon emissions. They are a source of food, fuel, fertilizer and fodder for animals, they provide shade and shelter, and help communities to protect the land from soil erosion caused by both the baking sun, and by heavy rainfall,” the charity spokesman added.

Just last week, Self Help Africa concluded a scheme of planting 300,000 tree seedlings in Ethiopia, which was a part of a national Green Legacy Initiative that planted a total of 350 million trees in the country, last month.