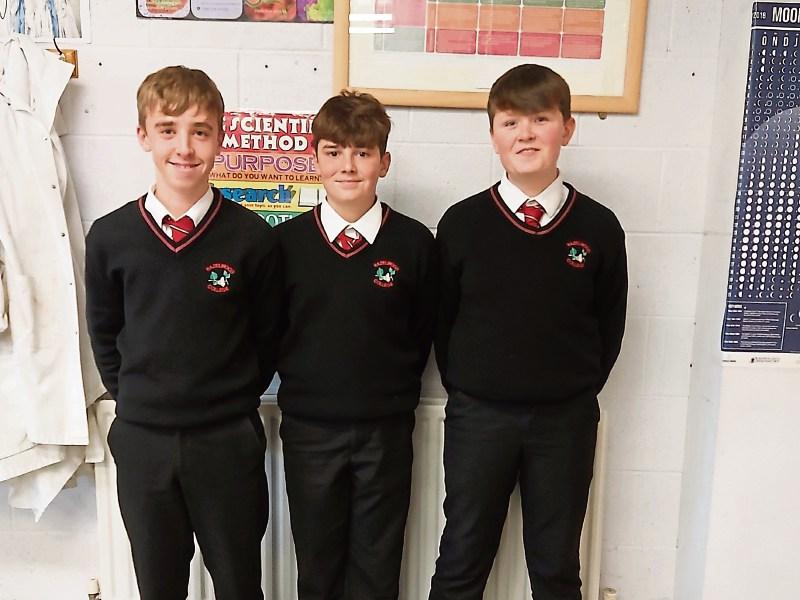 Laois councillors are backing a plan by a BT Young Scientist team from Limerick to end the scourge of abandoned tents at the Electric Picnic festival.

THE fate of thousands of tents abandoned each year by festival goers has captured the creative interest of three second-year students from Hazelwood College, Dromcollogher: Eoin Tynan, Daniel O’Connell and Stephen Minihane.

A chat with Stephen’s dad, Ian, a regular festival goer, got them started.

“He has seen all the tents left behind,” Stephen explained.”He was always saying it when he came home. He had been trying to come up with something that would help.”

“I thought it was a very good idea,” Daniel chipped in. “All the tents are damaging for the environment and something had to be done about it.”

First though, the boys needed to understand why.

“It goes back to human behaviour,” Eoin explained. The boys met with UL professors Stephen Kinsella and Declan Dineen who explained to them about the principles of the carrot or the stick in helping to change behaviour.

And the examples they gave were the refunds paid when glass bottles were returned, the carrot, and the price charged for plastic bags, the stick.

Armed with this information, the boys compiled a Monkey survey with some key questions, which they circulated to various festival sites and to colleges and to their great satisfaction, they got 373 responses.

One key question was to ascertain what people’s price range was when it came to buying a tent, as they reckoned that people were more likely to abandon a cheap tent.

And when it came to analysing the responses, they discovered that 18-20 year olds made up the majority of those likely to abandon a tent.

The boys also discovered that most people mistakenly believed that abandoned tents were gathered up and donated to relief charities.

“We emailed charities to see their side of it,” Eoin explained. “They did not receive tents and have never been offered any tents.”

Applying their theory of “the carrot and the stick”, these three young thinkers designed an app with a QR code which would appear on each festival pass.

This QR code would be scanned and anyone arriving at the festival with a tent would automatically have €50 deducted from their account. On leaving the site, provided they brought the tent with them, it would be automatically reimbursed.

To make the system work, the boys have first to convince the bodies who grant the festival licences: the local authorities.  “We have to sell it to councils first,” explained Stephen.

They say they have found support from councillors in Laois County Council which gives the licence for Electric Picnic.