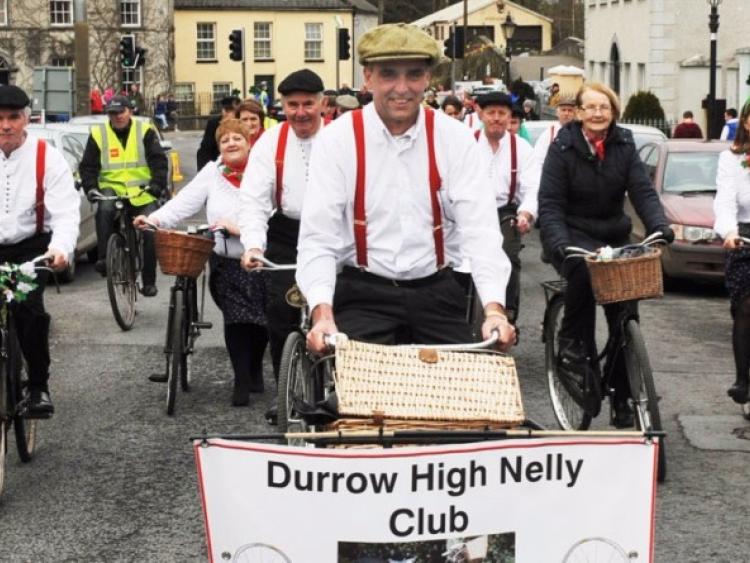 101 year old, Mrs Kathleen Bolger will certainly be 'Wheeling in the Years' at the May launch of this year's Bulfin Heritage Cycle Rally at Donaghmore Workshop Museum near Rathdowney.

As the sprightly and effervescent Kathleen recalls: "I cycled my first High Nelly bicycle in 1926 as a 10 year old child".

Proceedings in Donaghmore will commence at 2.30pm when Kathleen will arrive in style in a 1952 Rolls Royce Silver Wraith limousine, before cutting the tape to officially launch the Bulfin Heritage Cycle Rally 2017.

Planned to coincide with the Irish Heritage Week celebrations in Laois, The Bulfin Heritage Cycle Rally is probably one of the most unique bicycle journeys available to High Nelly/Vintage bicycle enthusiasts in Ireland.

Participants will embrace the hidden heritage of South Laois and North Kilkenny from the saddle of their High Nelly bikes, as they set out to recapture a unique bicycle journey, first undertaken by journalist, writer, and proud Irish nationalist, William Bulfin in 1902.

The "Bulfin Heritage Cycle Rally" was first held in 2014 as a unique event aimed at showcasing the hidden heritage and tourism potential of the South Midlands area of Ireland. Gaining its inspiration from William Bulfin, who cycled around Ireland in 1902, the event is a valuable introduction to the heritage that inspired much of the history, culture, music and storytelling of Ancient Ireland.

William Bulfin was born in Derrinlough, Co Offaly in 1864. He emigrated to Argentina in 1883, where he worked among the native gauchos and cowboys before becoming proprietor and editor of “The Southern Cross” newspaper in Bueno Aires.

Bulfin returned from Argentina in 1902, he then set off on a heritage fact-finding journey that took him through the highways and byways of Ireland on a steel framed bicycle made by Pierce Ironworks in Wexford. “Rambles in Eirinn” is an insightful book written by Bulfin about his cycling experience. The travelogue was published in 1907 and proved  to be a resounding success, extending to a fourth edition, published in 1915.