Flags, hats, green jumpers at the ready for St. Patrick's Day in Laois 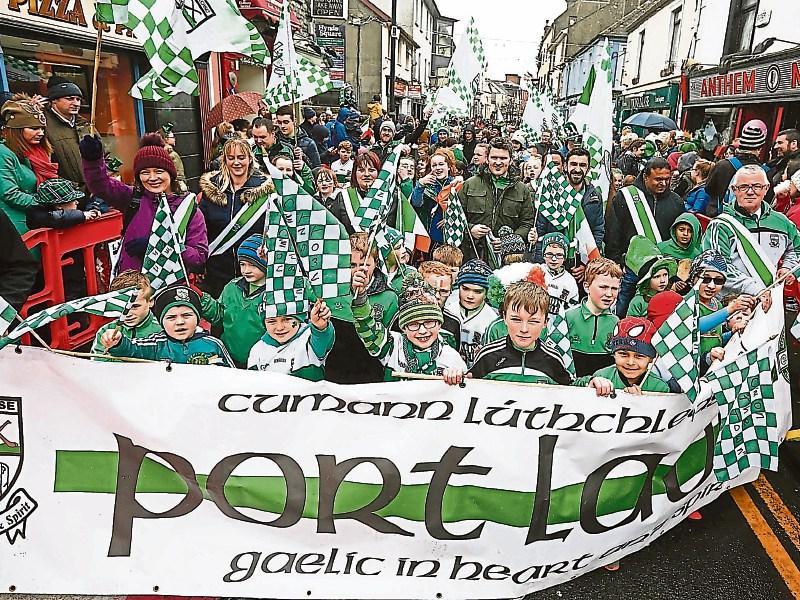 Pipe bands and tricolours are at the ready as thousands of people are expected to line the streets of Portlaoise, Portarlington and Mountmellick for the annual St Patrick’s Day celebrations.

With parades planned in towns big and small, each with their own brilliant themes and creative celebrations, it is set to be an exciting day for Laois communities.

In Portlaoise, walkers, joggers and runners will have a chance to get their exercise in ahead of the day’s festivities by taking part in the Streets of Portlaoise 5K road race organised by Portlaoise Athletics Club.

The race kicks off at 11am at the old Centrepoint Shopping Centre on the Mountrath Road with over €3,000 in cash prizes to be won as well as kids prizes.

The buzz of the road race will set the tone for the day as the Portlaoise parade will kick off at 12.30pm sharp.

The students of St. Francis School will be honouring the parade as Grand Marshal.

A street festival will follow the parade with bouncing castles, games, live music and craft stalls. There will be live music from local acts and music groups to keep everyone entertained.

Celebrations will kick off a little later in the day in Portarlington, all groups taking part are to meet at Station Road at 2.30pm.

One of the best known campaigners for road safety in the country, Gillian Treacy, and community hero Terence Lawlor will be Grand Marshals.

The theme of the parade is “Culture and the Irish Language.” There will be music and entertainment before and after the parade in the main square.

Irish dancers, scouts, GAA groups and a Lithuanian group are among those who will march in the Portarlington parade as well as local business floats. Birds of prey, a bumble bee bus and face painters will entertain crowds both young and old.

Committee PRO Sharon Dunne said there is a great buzz ahead of the parade.

“The parade and the day is all about representing local clubs and groups in the community and it is really a great day for kids,” she said.

In Mountmellick, the theme this year is “Mountmellick Together” and all will assemble at 1pm at Turley’s Pub/Youthreach centre with the parade starting at 2pm.

There will be family entertainment in O’Connell Square from midday including a highly anticipated performance from Mountmellick singer songwriter Tobi Akinborewa at 12.30pm as well as other local musicians all day.

Mountmellick Flood Community Support, Mountmellick Celtic, and Team Laois Martial Arts were chosen by the committee to have floats designed and made for them.

Local teams, clubs, community groups and bands will march in the parade on the day bringing the town to life.

Chairperson Jason McInerney is looking forward to the day.

“We are set to make our parade bigger and better . The aim is to put more visual display and more vibrancy into the parade.

“We aim to bring back more floats and create a more entertaining vibe within the town,” he said.

All around the county the parades will be a testament to the strong community spirit in Laois and the pride its citizens have in being Irish.