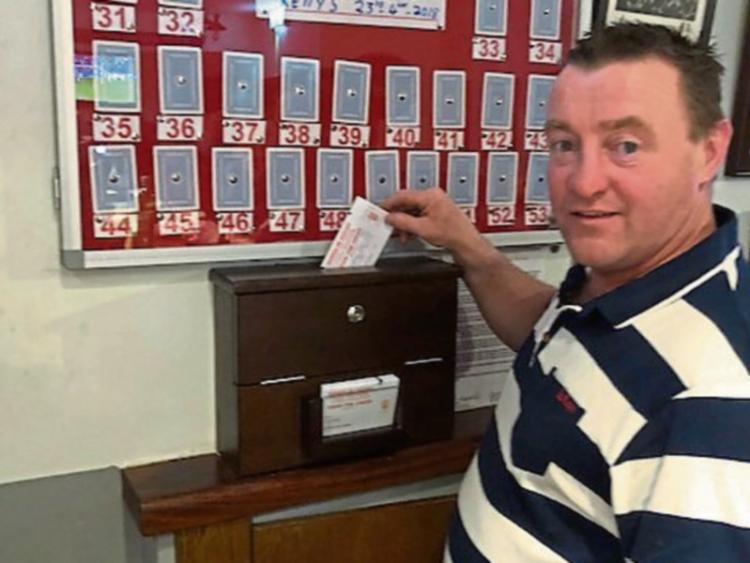 Find the Joker was launched by Borris-In-Ossory Community Development Association/Tidy Towns and Borris-in-Ossory Santa Claus Club at a function in Kelly’s Bar recently.

The jackpot starts at €200 and increases by €20 fortnightly if not won. Entry Fee to select where you think the Joker resides, between 1 and 53, is €2.

The draws rotate each fortnight between Rosie O’Grady’s and Kelly’s Public Houses. Envelopes to participate in the game are also available at Daybreak, the Post Office, from committee members and supporters of both organisations. Completed envelopes can be deposited in any of the purpose built boxes which have been installed in the four business premises.

The first draw took place on Monday, April 23 at Kelly’s. Stephen Fahy was the first envelope drawn and number four was his choice. Card at 4 was turned but no sign of the Joker! Stephen received a consolation prize of €20. The board was then transferred to Rosie O’Grady’s Bar and the second draw will take place onMonday, May 7.

Both venues are thanked for their kindness to allow the draws to be promoted and conducted on their premises. Thanks also to Daybreak and the Post Office for displaying the posters, envelopes and envelope boxes.

Sincere thanks were extneded to Richard Power for making and sponsoring the deposit boxes.

Details, results and rules of the game are available on both organisations Facebook ages (Borris Tidy Towns and Borris-in-Ossory Santa Claus Club) on posters in all shops or from any members of both organisations. Please support this fundraiser for your community.

Card number four was turned and will now be unavailable for the duration of this first game. Jackpot now has risen to €220. Try Your Luck.