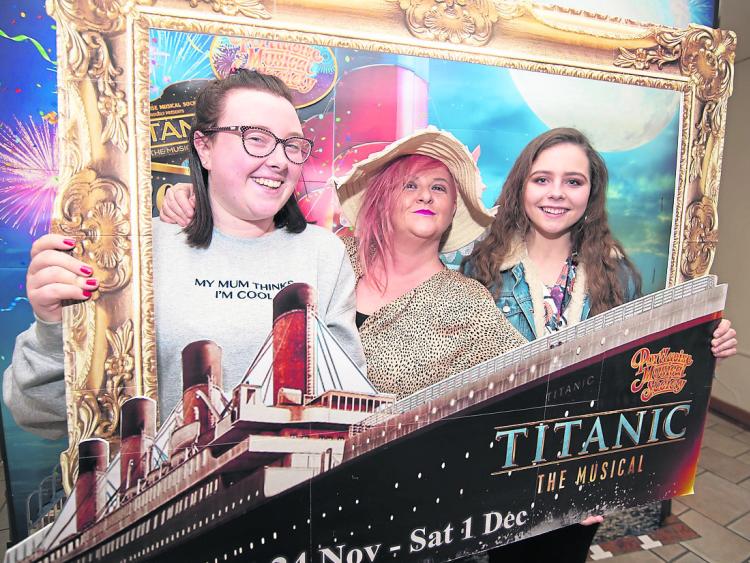 Based on real people aboard the world’s most legendary ship, this stunning and stirring story is focused on the hopes, dreams and aspirations of the passengers, as they face one of the most tragic disasters of the 20th Century.

Chairperson of Portlaoise Musical Society, Sharon Dunphy has been involved in all 20 years of productions.

“I am thrilled because it has just gone from strength to strength each year you can see it getting bigger and better, the community supports it, joining it and the younger generation is starting to get involved which is great you can see them on stage they are feeling it the way we felt it and they love it as much as we do.

“Each year has been different. Our first year was Oklahoma, a classic, and a great year to start off it’s an oldie but everyone knows it, up through the years we did Beauty and the Beast that was another all-rounder as well, All Shook Up would have been all Elvis, Jesus Christ Superstar about Jesus’s final days so we have had a lot of different shows over the 20 years,” she said.

Sharon added that it is the local involvement, support and sponsorship that keeps the show on the road.

“From committee level down to volunteers especially the support from the town, surrounding areas and sponsorship because it does cost an awful lot to put on a show and without their support, you couldn't sustain it. In fairness to Portlaoise people, they are a great support for local arts. We rehearsal Sunday, Monday, Tuesday, Wednesday and Thursday. We are nearly there and enjoying it now, there is a cast of 64 and 12 children - the biggest year.

"It is a lot of commitment but it is worth it at the end, that week we have on stage at the end we just love it,” she said.
Sharon explained how this isn't the classic story of Jack and Rose on the Titanic but it is the reality and sure to pull at the heartstrings.

“It is big, there isn’t a Jack and Rose, there isn’t a ‘Heart Will Go On’, it’s actually the true story of the final week of Titanic the final few days and the people on stage that we are representing are the real people that were on the Titanic when it set sail so you are seeing what happened. People have done their homework and made a musical out of it.

"The music is powerful it will get the heartstrings. Will she sink on stage? We have part of a ship on stage and we are putting the finishing touches on that. We have it nailed down but we are polishing everything,” she said.

PRO of Portlaoise Musical Society and cast member Sean O'Neill said it can cost between €45,000 and €55,000 to put on a show of this magnitude.

“Through fundraisers, ticket sales and through the local people who sponsor the show year in year out - if it wasn't for them it wouldn't be possible.

“It is totally different to last year when we did Rock of Ages this is a lot more serious and because it is Titanic everyone knows it and it is sad in parts and we would like to try and get the emotion of what went on onto the stage.

“Everyone knows the story of Titanic, there is no Jack and Rose there is real life people and real love stories. It’s the real take on Titanic there is no made up bits in this, it looks at the story of the crew, the first class, second class, third class. Normally in musicals there’s one or two that are the leads in the show - there are no leads in this show there are over 30 named parts in the show,” he said.

All 76 cast members including children volunteer their time and take part in the love of the show and the enjoyment they get out of the week. The show runs from Saturday, November 24 to Saturday, December 1 at the Dunamaise Arts Centre.