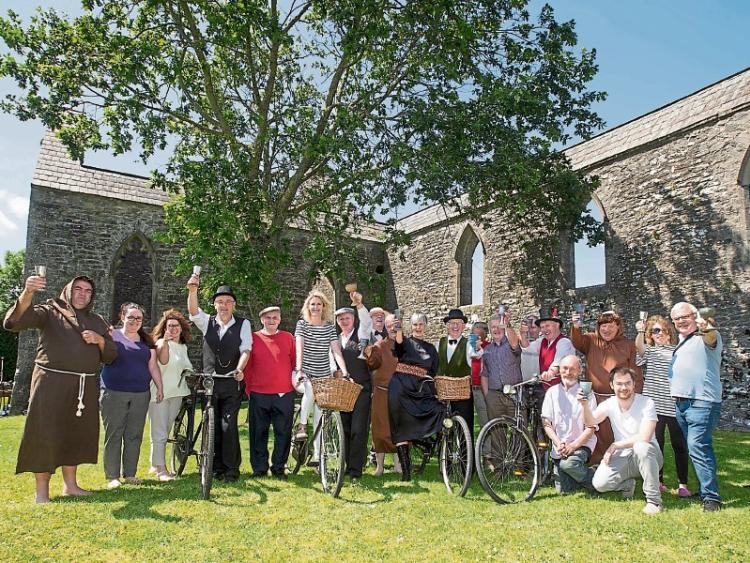 The gathering at Aghaboe Abbey for the launch of the Bulfin Heritage Cycle Rally picture: Alf harvey

One of the greatest boasts of the Bulfin Heritage Cycle Rally, is that of unravelling the centuries old enigma of time travel!

Long has the question of its possibility been mulled over, and long is the list of failed contraptions, designed for quantum leaping!

“So is time travel possible?” you ask. Well, we have been doing it, every August, since 2015, on a time-machine that was invented by an Irishman, in 1892!

The apparatus in question is of course, Ernest Bowden’s High Nelly Bike.

Upon this machine, attired in vintage clothes, we plot our course through time; awakening long forgotten histories, exploring our rich cultural heritage, and bringing them both to life through talks, reenactments, and pageants.

It’s relatively easy to visit the past because it envelops us! History is everywhere, and only ceases to be history, when time progresses beyond the unrecorded memory of a place, or event.

And unlikely as that sounds, in our modern age, it happens. Our time travelling mission is to journey from present to past, preserving our heritage for the future!

The medieval heritage of Laois and Kilkenny, will be explored, along with the connection that existed between the Counties in that era; some of which resonate to this very day.

Coupled with the lives and ways of the associated Saints, namely Fintan, Canice and Fergal, it promises to be another cycle of enlightened discovery.

Highlights will include a visit to Aghaboe Abbey in Laois, and St. Canice’s Cathedral in Kilkenny! On top of all that, the Medieval Mile in Kilkenny will be explored, and a rich theme of monks, Saints and general medieval-ness permeates the entire two day agenda.

Our Heritage Cycle is inspired by William Bulfin, who returned to Ireland in 1902, having worked in Argentina.

Bulfin was born in Derrinlough, Birr on 1st November, 1863. He was the fourth of nine sons born to William and Ellen (nee Grogan), who also had one daughter.

At the age of 21, Bulfin emigrated to Argentina, with his brother Peter. They worked on the fertile lands of the Pampas region, having acquainted themselves with an ever growing community of Irish expats.

Whilst toiling on the pampas, William Bulfin chronicled his experiences in a series of writings, which were published in The Southern Cross newspaper, in Buenos Aires.

He would later work as sub editor for the publication, before returning to Ireland in the early 1900’s.

Upon his return to Ireland, he purchased a steel framed bicycle, made by Pierce of Wexford, and set off on a road tour of his beloved Ireland.

His journey would wind and weave a route of over 3,000 miles, along the countless byways and country lanes of all four provinces.

He recorded the details of his venture, cataloguing all the places he had visited, the people he encountered, and the histories they imparted; both whimsical and factual.

These writings were published in 1907, in a book entitled, Rambles In Eirinn, and it is considered one of the most important social and historical documentations of Ireland in that era. Reading it is also a pretty astute way to time travel!

So why not join us this year, as we step back in time! The cycle is divided over two days, with an average daily distance of approximately 35 kilometres.

All cycling is at a very relaxed pace, punctuated with many breaks, as each heritage site is arrived upon.

Talks, re-enactments and pageants are on the itinerary; all of which afford the cyclists some recovery time, whilst they soak up the history, with plenty of food and refreshments to hand.

“Ours is not an endurance cycle, but one of appreciation! Heritage on a High Nellie”, we like to say.

Perhaps it’s time to dig out, that old vintage bike, and hit the road with the Bulfin Heritage Cycle Rally, on August 24 and 25, and for the very first time, we are offering the option for non-cyclists to join us, by availing of our Heritage Bus option.