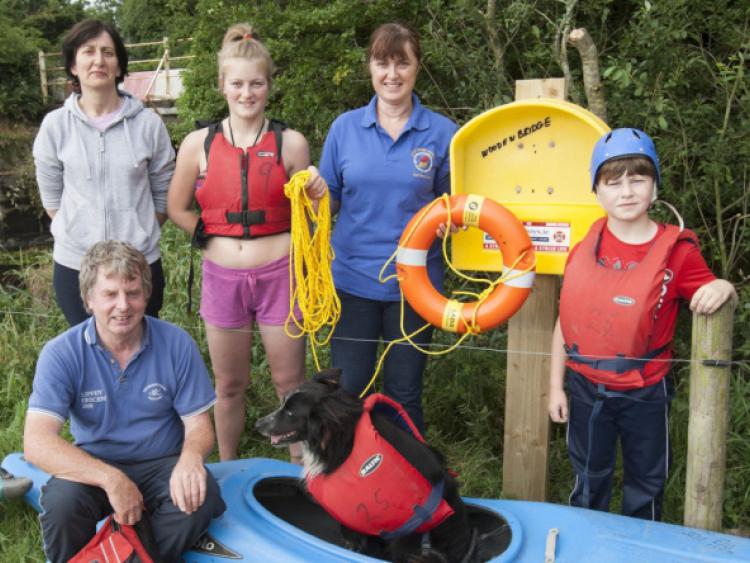 Young swimmers and canoists on the Erkina River are now safer in the water, following the installation of lifebuoys, and a talk on water safety.

Young swimmers and canoists on the Erkina River are now safer in the water, following the installation of lifebuoys, and a talk on water safety.

Last Thursday July 25, Water Safety Officer Valerie Case spoke to a large group of Woodenbridge Paddlers about safety in the water, advising them not to swim alone, and to know the area.

“Stay away from quarries, they could be the most dangerous place to swim,” she said.

Chairman of the Woodenbridge Paddlers is Michael G Phelan.

“We are trying to avoid a tragedy. There have been so many drownings in Ireland during the heatwave. We thought it would be good if somebody came and had a chat, to highlight to the youngsters what to do if an accident happens,” he said.

The two lifebuoys have been strategically placed, one at the wooden bridges where the club are based, 5km upstream from Durrow, and one close by at a swimming spot.

“That is a very deep stretch of river, it is 16 foot in one section. If anybody gets into that, with the currents, they are in bother. People might think they are good swimmers in a swimming pool, but it is different in a river, they panic,” he said.

The lifebuoys are out of eyshot from the road to prevent misuse or vandalism.

The council have also placed four new lifebuoys beside Grantstown Lake near Ballacolla.

Ms Case said vandalism was a “huge problem in towns”.

She asked the public to report missing or vandalised ringbuoys at www.ringbuoy.ie.

There were eleven drownings during the hot spell in July, most of those inland, but none in Laois.