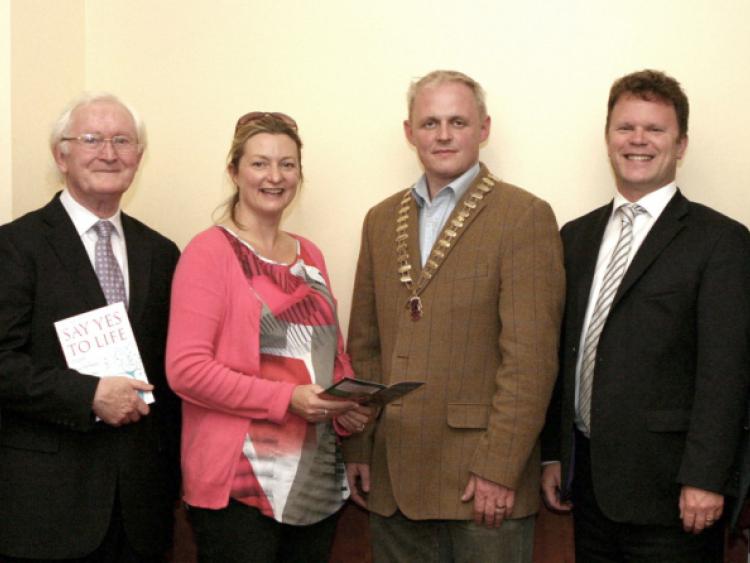 Ireland is going through a stage of “national adolescence” in the wake of the recession - and it’s time for us to take responsibility for our mistakes.

Ireland is going through a stage of “national adolescence” in the wake of the recession - and it’s time for us to take responsibility for our mistakes.

That was the message that went out at a special talk held in the Portlaoise Heritage Hotel last week, as part of the Laois Connects week on mental health. The event was hosted by the Portlaoise Lions Club, represented on the night by MC Mr Marcus Breslin, with the collaboration of Laois Community Forum and Laois County Council.

Two guest speakers shared the fruits of their considerable experience with the audience, who had braved a wet and windy night to hear practical advice on debt management and remaining positive in the face of adversity.

First to speak was Mr Ross Maguire, a barrister and founder of New Beginning, a company comprised of lawyers and financial experts who assist in areas of legal and economic expertise.

“Borrowers have faced a perfect storm,” he said, “one that’s never been seen in any developed country before.”

He explained that Ireland has had to weather the “triple storm” of the property sector collapsing, having to pay back our debts in Euro instead of a local currency, and the fact that Ireland has no laws to help people escape from debt.

He said that some 200,000 families have been directly affected, many of whom have done nothing wrong and were pushed on by the banks. His advice was for people in serious debt to consider declaring themselves bankrupt.

“Bankruptcy is now a card that people can play. The moment you bankrupt yourself, your debts are gone and even the threat of bankruptcy will force banks to do deals.”

He said that he believes over the next few years more deals will be done between banks and borrowers. In response to a question from an audience member, he elaborated that within a marriage, say, one partner can declare bankruptcy while the other is still solvent and it is very possible to hold on to the family home.

Next to address the audience was Mr Christy Kenneally, TV presenter, author and public speaker.

Mr Kenneally said that the Irish people had been living in a comfort bubble, one which ultimately proved to be as durable as a plastic snow globe when the bottom fell out of the property market leaving “chaos and crisis”.

“We’d all love to hide in the current circumstances,” he said. “The human mind resists change, like the body resists an invasion.”

In a speech peppered with rich imagery and poetic flourishes, the erudite Corkman said he believed Ireland is now in a tremendous time of growth and “for the first time in history we have no one to blame but ourselves”.

“We are going through a national adolescence,” he said. “Ireland needs to stop and have its crisis. We are tremendous at taking a sidestep emotionally, we are ‘lethally nice’.”

He alluded to news coverage of hurricane survivors standing in the ruins of their homes, where their first reaction is shock, followed by anger, which leads eventually to people making connections with their neighbours. The next step is for them to start going through the rubble, looking for such memories as wedding rings and family pictures.

“The values that they take out of the rubble of their old life can lay down the foundation for their new life.”

He concluded with a message of hope: “The most important learning in life is what you learn from failure. You have to make a distinction between ‘I am a failure’ and ‘I have a failure’.”