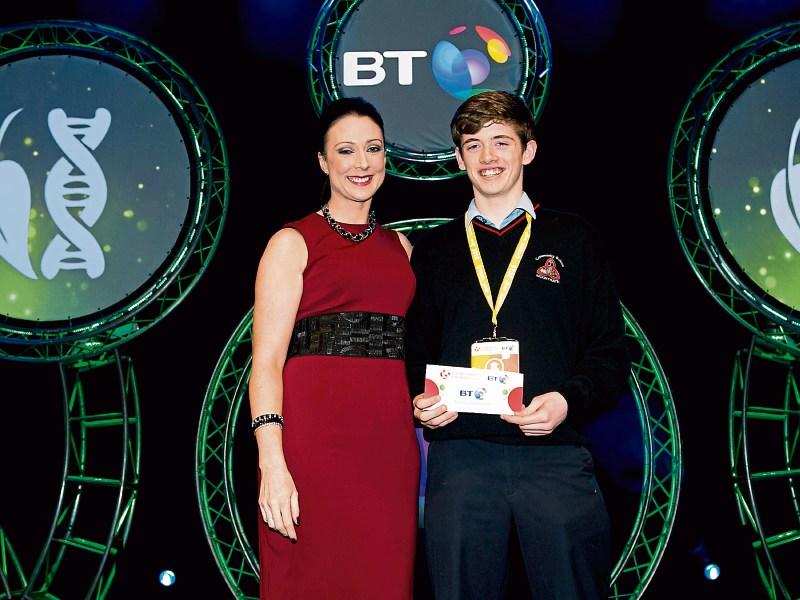 A Mountrath Community School student has scooped an award at the BT Young Scientist and Technology exhibition after proving swimming helps tackle asthma.

He won second in the Biological and Ecological Intermediate Individual category.

Christopher’s project attracted a lot of attention over the four day exhibition, with visitors testing their lung strength and comparing it to that of top athletes.

For the project, the Portlaoise native recruited 43 asthmatic volunteers on a six week trial to compare the benefits of swimming, basketball and football.

Trial participants were found via Mountrath CS, Timahoe NS and Portlaoise GP Dr Deirdre Honan. Spirometry testing was carried out at the start and end of the trial by Geraldine Nolan, Chief II Respiratory Physiologist at St Vincent’s Hospital .

Results proved that swimming is the best exercise to help asthma control.

Dr Des Cox from Crumlin children's hospital also advised Christopher, and plans to submit a paper about his findings to a medical journal.

The Asthma Society of Ireland plans to make use of them “in the near future”.

Christopher first entered the Young Scientists while in Timahoe NS, in the primary fair exhibition.

“We are delighted for Chris and are extremely proud that he is the first MCS competitor and award winner in the BT Young Scientist competition. It takes an awful lot of hard work and dedication,” she said, paying tribute to his science teacher Dr Mary Kelly .

A champion swimmer with Laois Marlins, Christopher followed his science success by winning gold for his school in the Leinster Senior Schools Championships on Sunday.

The other senior Laois entrants were the team of Matthew Bride and Darragh Wright-Twomey, Portlaoise College with an environmental project on the production of bio-degradable plastic bags from food material. Laois schools at the primary fair included Maryboro NS, the Heath NS, St Joseph's NS, Ballyadams; Rath NS, and Timahoe NS.