'Plenty of hard work' the secret to long life 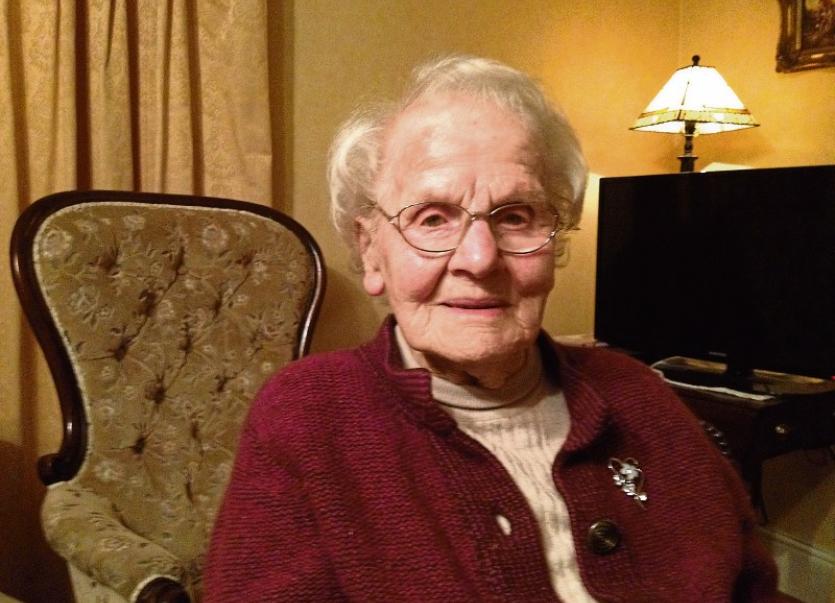 “I can't complain, thanks be to God, I have enjoyed good health always”.

That good health has resulted in Mrs Kathleen Bolger celebrating her 100th birthday at home in her Cannonswood farmhouse on December 10.

Her relative Fr Robert Fletcher, and Bishop of Ossory Seamus Freeman celebrated Mass in her home, and the next Sunday locals threw her a party after Mass.

“It was really lovely, a real surprise, all the attention is getting embarrassing,” Mrs Bolger said.

Born Kathleen Cullinan in Boleybeg just before Ireland's revolution, she has lived through historic times.

“I saw three wars. Things are so different now, everyone is well off,” she said.

As a child she attended Spink NS and then cycled to the Brigidine in Abbeyleix.

“I was six and a half years nursing in England before I came back and married my husband Michael John. I came home with rheumatic fever and didn't go back. I had met him before and he was waiting,” she said.

They took on the Bolger family farm in Cannonswood, near Durrow.

Kathleen then 43, took on the tillage and beef farm while rearing her children.

“I just had to get on with it. I got great support from family and neighbours. I had to learn to drive. I used go into town with my eggs and churned butter. I killed our pigs, and grew our vegetables. I was very independent,” she said, sitting at the stove in the farmhouse where she still lives, with her son Kieran and daughter-in-law Alice.

“I had great faith always. I'd say that's what kept me going,” said Mrs Bolger.

She has 22 grandchildren and 18 great grandchildren. Sadly her son Eddie's first anniversary mass was three days after her birthday.

One of eight children herself, Kathleen's only surviving sibling is her sister Maureen Kennedy, 90, from Ballinakill.

The secret to long life and health is “plenty of hard work”.

“People told me to join the ICA but I was too busy. I'm not fond of sugar, I have my porridge every morning, but my passion is apple tart, I can't say no to it and Alice is a great baker. I enjoy the odd glass of wine, but I have never been in a pub in my life,” she said.

She is not on medication, and drove until she was in her mid 90's, when a broken leg forced her to take it easy.

“I love to travel. I went to Dubai for my 90th birthday, to see my granddaughter Caitriona,” she said.

Another trip brought her to Australia.

“We stayed with cousins and they drove us around to see the sights. I loved travelling,” Mrs Bolger said.

“Around seven in the evening when the jobs were done I would go and walk. The dog was always a great excuse,” she said.

She is glad to be still living in her home.

“It is great. I am all my life here. That means an awful lot,” she said.