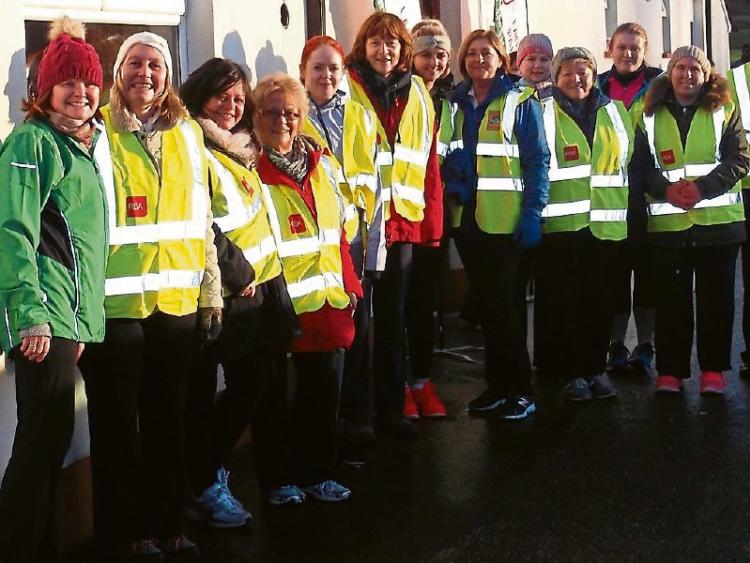 Registrations began in Emo Community Centre after nine am on the bright fresh morning of Saturday, January 9.

The event started with a zumba workout courtesy of Laois Zumba on the community centre’s all weather pitch. After loosened up everyone set off on the walks through the scenic woodlands of Emo Court.

Members of the Civil Defence attended with a van, a jeep and two bicycles. Katie Sinnott and Grace Murphy mounted the bicycles to follow the seven kilometre walkers around the lake in the Emo Court Gardens.

Refreshments were served in the Emo community Centre for everyone on their return. The centre was buzzing with people who had completed their walks as they chatted and congratulated each other on their successes.

The event was co-organised by members of Laois Sports Partnership (LSP) Roisin Lawlor, Catriona Slattery and event co-ordinator Caroline Myers. Speaking afterwards the organisers estimated that this year’s event was the biggest that they had seen to date.

Operation Transformation will continue throughout the year with weekly five kilometre runs/jogs organised from Emo community centre which began on Saturday, January 16 at 9.30am.

Operation Transformation has launched a 12 month campaign which began this month called Ireland's Million Pound Challenge. The goal of the Challenge is to inspire the Irish nation to collectively lose one million pounds in one year. Individuals or groups can register online at rte.ie/ot. People can track their contribution to the million pounds weight loss.

Weigh-ins and filming will take place in the coming weeks throughout the country meeting groups who are taking part in the challenge.

Inspirational stories will come from the biggest weight losers and from those who have overcome adversity to take part in the Million Pound Challenge. More information on how to get yourself or your group involved is available from (LSP) 057 8671248.