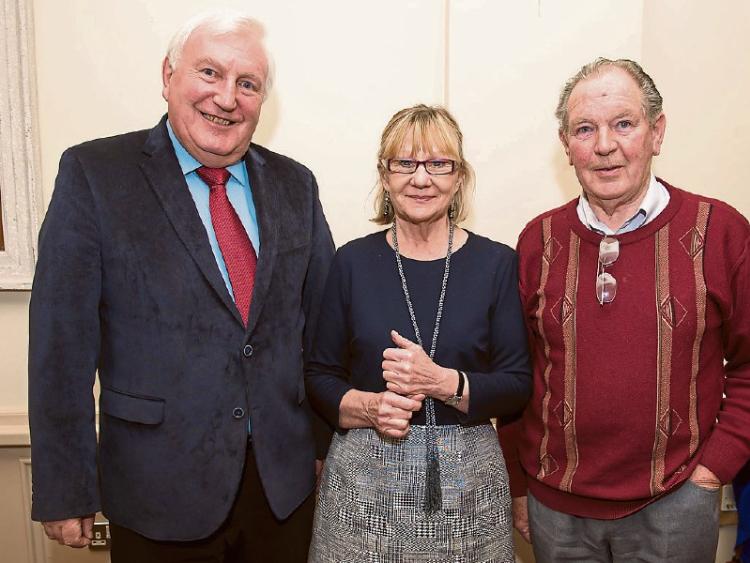 The centrally-located Fort, incorporating the site of the former Odlum’s Mill and bounded by some of the original town wall, is of major historic importance.

Mr Parsons said it was Ireland’s first “plantation fort.” He vowed: “There will be no messing with that fort.” Architect Richard McLoughlin has compiled the report on the structure, with funding from the National Heritage Council and Laois Heritage Society.

Michael Kerry, a member of a long-established Portlaoise family, stressed the importance of having a museum/heritage centre in the town.

He added: “Odlum’s is down there and there’s nothing only lorries in it. Six years ago a shopping centre was going to be built there.”

Chairman Parsons: “I could not agree with you more. The County Council have responded very positively to the report. We have met the new County Manager and I believe he is sincerely listening to what we are saying.”

The traders had also come on board, stated Mr Parsons, and were planning to hold a festival next June centred on the Fort.

Chairman Parsons said the Society would form a sub-committee to work towards getting a heritage centre/museum, and he hoped Mr Kerry would be in a position to serve on that body.

Society President Teddy Fennelly: “We have been pushing the need for a heritage centre/museum. We are being listened to, at least.”

Earlier, Mr Parsons had welcomed everyone to the well-attended agm and said a lot of good work had been done during the year. He added: “We are delighted to have attracted a lot of new members.”

Secretary Dolores McEvoy said membership had risen in the year from 27 to 58. The Society now had a website and was on Facebook, she revealed. Its Schools’ Heritage Project had attracted 40 projects and 80 essays. It was also involved with the 1916 centenary programme, she added.