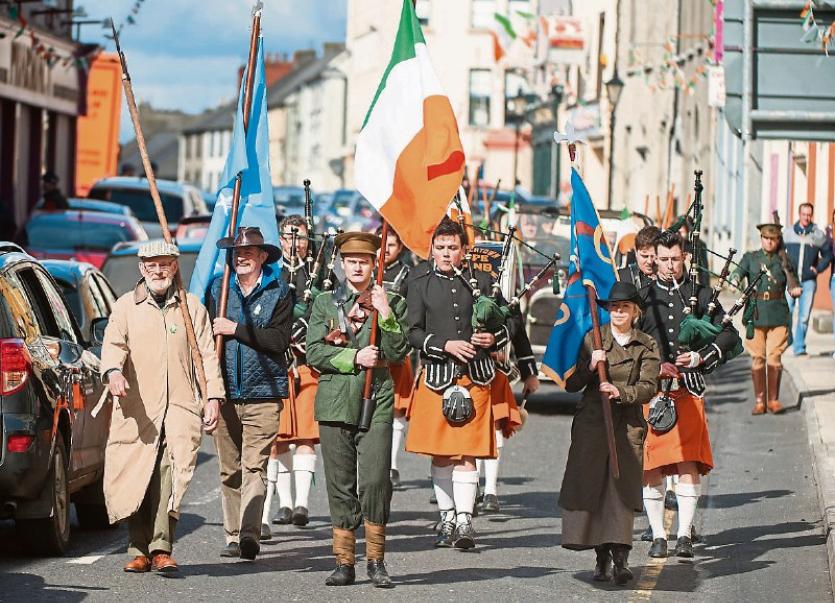 As people filed into the Church to pray for all peoples who had died in 1916, their attention was taken by people also arriving in period dress and old army uniforms.

After Mass, many people gathered to watch the assembly of participants in the parade.

Decked with flags, following a pipe band and vintage car, there was a great display of colour and of a feeling of pride as the group marched through the town.

A huge crowd assembled in the Owenass Hall to view the display 1916 relics which people from across the county had contributed to.

Winners from the art and poetry competitions which were rolled out across the county were awarded their prizes.

Proceedings in the square were chaired by Leon De Barra who was a witty, interesting and informative speaker.

This was followed by a brief history of each of the Procalamation signatories and a rendition in their honour, with a large crowd of spectators enjoying it all.

Crowds of people surged forward to view the sealing and burial of the Time Capsule, which will not be opened until 2116 and the laying of a Commemorative Plaque.

Anne Keogh and Dolores McRedmond laid wreaths, one of which was especially made in honour of the day by yarn bombers Dolores Mc Redmond and Mary Donaher.

The ceremony closed with the National Anthem sang by Brigid Delaney.

A great success – the day held something for everyone and will hopefully be remembered by future generations.

The beautiful wreath by the yarn bombers and winning entries of the art and poetry competitions can be viewed on display in Mountmellick Library for the month of April.