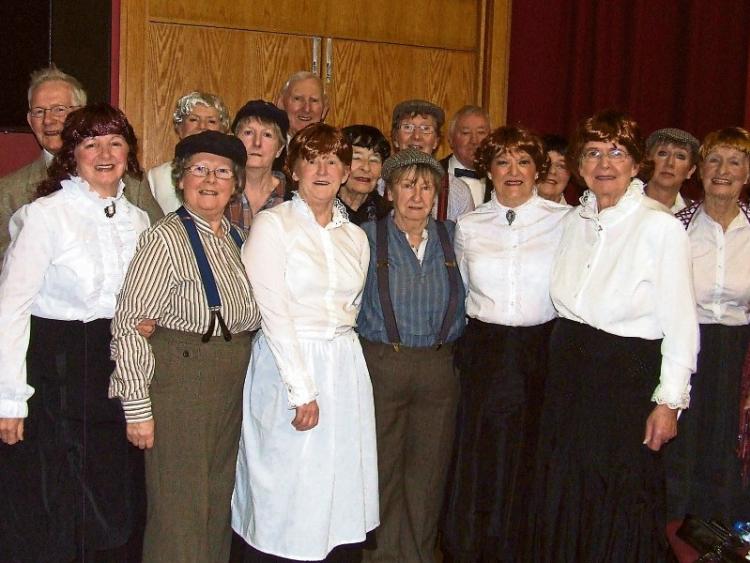 The members of Portlaoise Active Retirement Group certainly take their name literally when it comes to activity they had just completed their Bealtaine Spanish dancing festival and were looking for another project to challenge themselves.

With the nation celebrating the most important date in recent history. The centenary of 1916 Easter Rising their focus was on this pivotal year.

From little acorns big oak trees grow and an impromptu session of storming by a small working group grew into a two and half hour spectacular show in the Dunamaise Theatre performed to a full house.

Active retirement have built a strong relationship with the Transition Year Students in St Mary’s CBS. For three successive years the students have taken on the role of teachers in computer skills with the older pupils.

When approached they were happy to come on board and took on numerous tasks including running a competition to name the show. Hence”1916 A Terrible Beauty Is Born” which comes from Yeats poem describing the poet's torn emotions regarding the events of the Easter Rising .

They took on painting and making sets, designing posters as well as actors, musicians and stage hands.

Young people from the MGL Harp Ensemble opened the show. Scenes included a crossroads dance and kitchen hooley with music and dancing and singing. Both types of social gatherings popular in Laois at the time.

Well known thespian Kevin Lalor Fitzpatrick directed an adapted sketch based around the derailing of the Dublin train in Colt and the Brady sisters involvement. The seven signatories of the proclamation were featured and were linked by Michael Parsons to writings of James Fintan Lalor and the rising

Revival of our native language was keynote to the aspirations of a free state. Children from the Gaelscoil performed a piece of Irish Theatre.

In 1916 Laois were holders of The All Ireland Senior Hurling Title defeating Cork 6-2 to 4-1 Teddy Fennelly re-called this momentous occasion and Maureen Culleton composed a special piece of dance performed by the active retirement members.

The project was grant aided by Laois Council and the Ireland 2016 Programme.