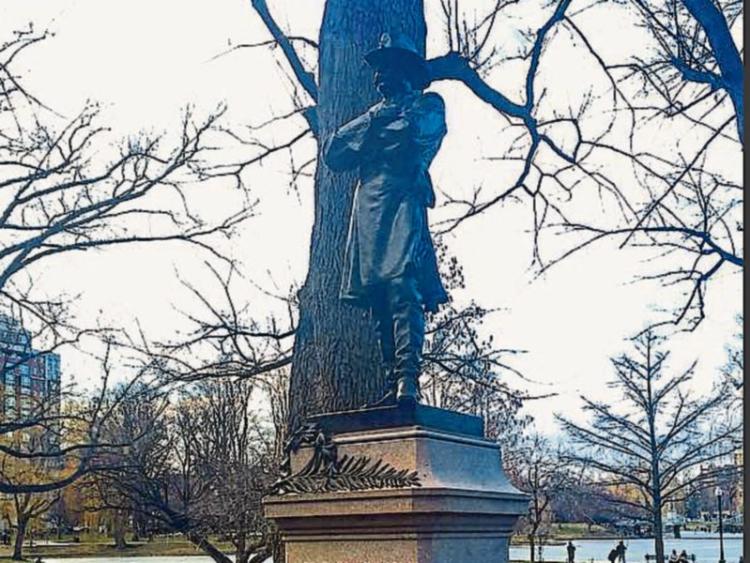 As an Irish person living abroad, particularly in a city like Boston you’re never too far from reminders of home.

Following the death of actor Robin Williams in the summer of 2014, I followed a familiar path like many other people in this city to see the famous bench where he sat during the movie ‘Good Will Hunting’, and put Will Hunting (Matt Damon) in his place.

As I roamed the Boston Public Garden on that summer’s evening, I inadvertently stumbled upon a statue of Colonel Thomas Cass.

This is when things started getting strange. Upon closer inspection I saw that he hailed from the Queen’s County, and my primary school history reminded me that this was no other than County Laois.

My study of history only extended through Leaving Certificate but it has really never dimmed in the years since.

After taking a picture of the statue, I took a moment and realised that to be memorialised in bronze in Boston’s Public Garden you must be highly regarded.

After some online research I was pleasantly surprised to learn that Thomas Cass was from just outside Abbeyleix, near Fruit Lawn, and had emigrated to Boston with his parents as a young boy and settled in the North End, a neighborhood sitting on Boston Harbor. As I thought more about this, it made sense to me regarding his surname, that is still familiar to the Abbeyleix area.

After forming the 9th Regiment Massachusetts Volunteers, comprised primarily of Irish-Americans, Cass led this influential regiment in battles as part of the wider Union Army.

This war would determine the outcome of modern day America and, if the Union would survive, the Confederate States declaration to secede from the United States. Colonel Cass was greeted by one of America’s most famous Presidents, Abraham Lincoln upon his arrival in Washington at the outbreak of the War in 1861, and possibly met with other Commanders such as Ulysses S. Grant and James A. Garfield, who would go on to become a future President of the United States.

Colonel Cass was a leading commander in some of the early battles of the Civil War, including the Battle of Mechanicsville and Gaines Mill.

He was mortally wounded at the Battle of Malvern Hill in July 1862 and, while the war raged for a further three years, Cass played a crucial role in the early exchanges of a bitter Civil War, whose ultimate result saw slavery being abolished.

Historical revisionism might point to the Civil War being a symbolic victory in the abolition of slavery and still a long journey lay ahead for the cause, however, a journey of one thousand miles begins with a single step.

The final part of my puzzle involving Colonel Cass was solved in February when I visited his grave in Cambridge’s (across the river from Boston) famous Mt. Auburn Cemetery where the inscription on his tombstone includes; “Born in Farnley, Queens County, Ireland 1821.”

A famous son of Abbeyleix never forgot where he was from, and was proud of it too.