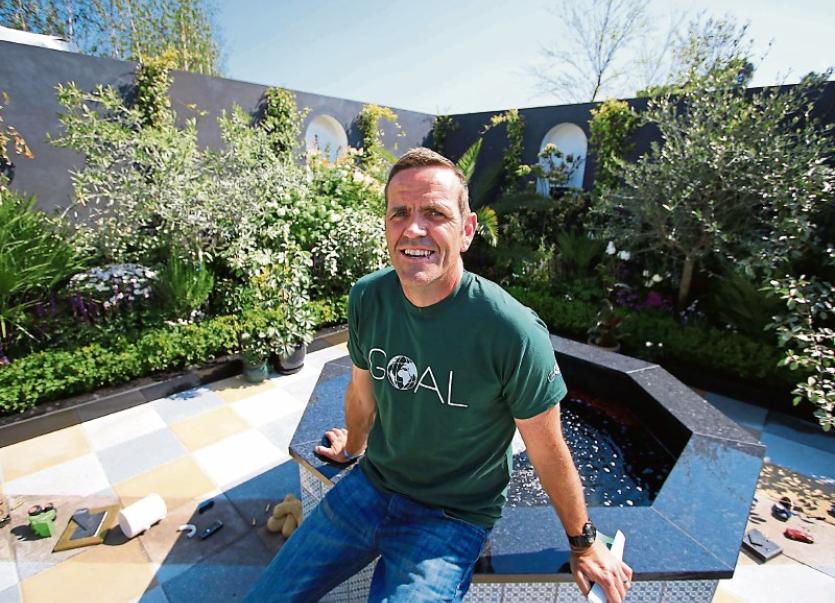 SuperGarden winner Brian Burke from Killenard won a silver medal at Bloom for a garden created to give some comfort to Syrian refugees living in Monasterevin.

His award winning garden at Bloom has now been returned to the former Hazel Hotel in Monasterevin, which opened as an orientation centre last year for 500 Syrian refugees to be taken in by Ireland.

“Myself and my wife Julia, like many, were moved to help after seeing coverage last year. We contacted Kildare Volunteer Centre and the idea was born to do a garden that could remind them of home,” Newbridge native Brian Burke told the Leinster Express.

The garden he designed in the centre is based on a Damascan court garden, with four high walls surrounding a paved area with lush planting and gurgling water, a calm space of contemplation.

“It is like the original 'outdoor room' that is so popular now. The input and help I got from the residents was invaluable, particularly on planting. We started as volunteers using donatedmaterials but we got to the point where we needed funds, and thats when I decided to do a version for Bloom, and Goal came on board as sponsors,” he said.

His Bloom version had a 'before and after' war theme, showing the past, the desolation of war, and hope for the future for wartorn families.

“We had some residents in the garden when President Higgins was passin g through, and he had a long conversations with them via an interpreter,” said Brian.

“The feedback was overwhelmingly positive, hopefully it will help people reengage with the Syrian crisis, as it has fallen off the radar,” Mr Burke said.

He moved to Laois eight years ago and is “well settled” in Killenard, with his favourite gardens in Laois being Ballintubbert House near Athy, and Heywood Gardens.

A trained quantity surveyor, he gradually turned to garden construction and design while working in the US in the 1990's, returning to Ireland in 2006 to work at it fulltime here. He is kept busy.

“There is a bounce back in the past 18 months, they say there is a two tier recovery but we can definitely feel a trickle down now. My silver gilt medal at Bloom last year was a great boost, so I hope for a repeat of that,” he said.

“ They appreciated how it was helping to shine a light on a conflict that is still raging, most of all they were delighted that it will serve a very real purpose once it is rebuilt,” he said.