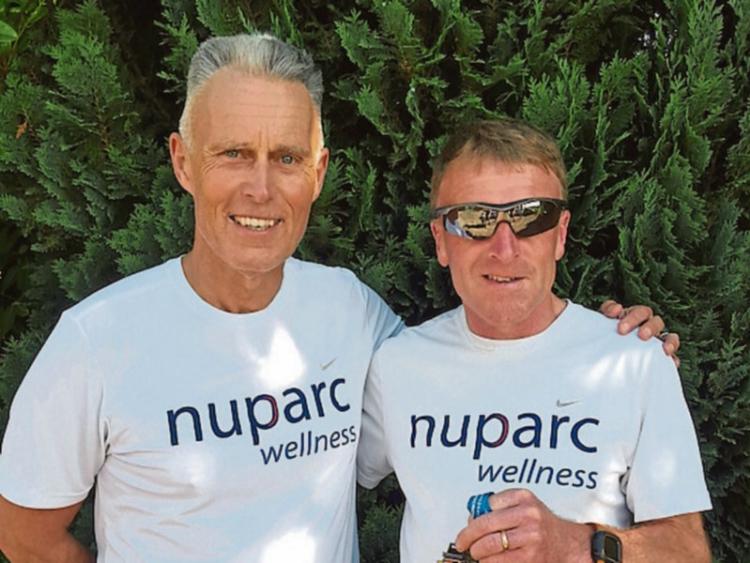 Nuparc Wellness athlete Aengus Burke travelled to Portugal on May 20th for the European Masters Half Marathon, and returned successful with a silver medal as part of the Irish O-50 team.

The Portlaoise AC runner is well known in athletics circles, and this was the highlight of his career after two years under coaches Ian and Teresa Wilson.

In June 2014, Aengus was heading for his 50th birthday and listening to the common held belief that speed work and personal best times were a thing of the past.

However soon after taking the step and linking up with Teresa and Ian, life changed considerably for this popular and humble athlete. A change is as good as a rest they say, and a new training structure resulted in a new lease of life for Aengus, and things soon took off.

After an initial fitness assessment that addressed elements of running endurance, speed and strength, a customised training programme, including core strength work and nutrition, was put in place.

Once these building blocks were solid, more sophisticated analyses such as lactate, haemoglobin, and haematocrit testing were assessed on a more regular basis, keeping Aengus fully informed of his running fitness levels, and helping him to identify areas of weakness that he should work on.

Prior to being coached by the Wilsons, Aengus was a 'steady' 10k/Half Marathon runner, lacking speed for track or 5K road events. However within two months he had won his first ever track race, taking the 'B' title at the Bob Quinn 3k in Tullamore, and in 2014 and 2015 Aengus medalled at the National Half Marathon in Dublin.

However, the biggest surprise was still to come when Aengus set a 5k PB of 16.26 at the Rathfarnham 5k in September of 2015, and in recent weeks he has broken this again, hitting 16.22 in Ballyroan, Abbeyleix and Districts’ Spink 5k on May 4th.

When one considers Aengus has been training for over fifteen years, and is now running the best times in his career it is credit to him and the workload he has taken on.

Aengus feels that the structured and professional approach, and training with a group of like-minded athletes is the key to the successes he has been having. “I am running better now than a decade ago, and this is something I though would never happen” says Aeugus. “The support and encouragement I get from my fellow athletes, especially my colleagues in Nuparc has helped my development considerably, and I am extremely grateful to Ian and Teresa for their help and guidance this past two years – long may it continue!”.

Nuparc wellness is an extension of work carried out in the Middle East by the Wilsons, where they oversaw the training of hundreds of athletes, many of which went on to be very successful athletes, some competing at World Championships and the Olympic Games.