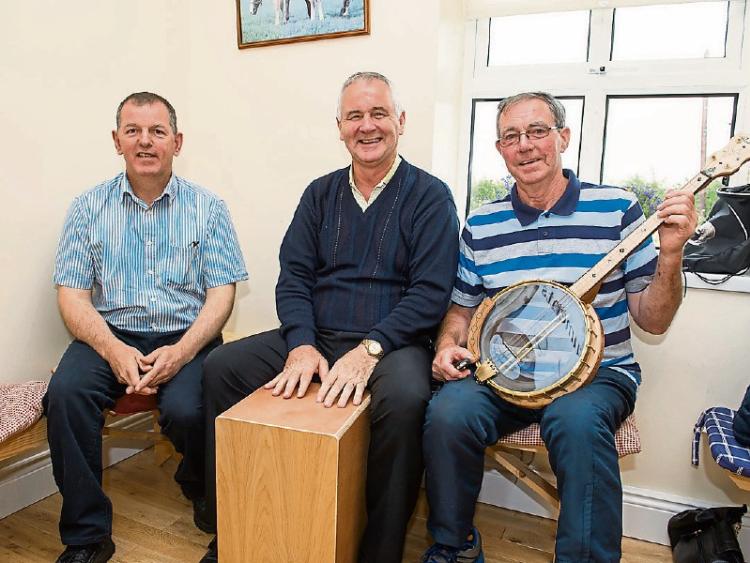 Carpenter Gerry Doheny from Ratheniska is rapidly carving his name as a maker of quality Irish traditional musical instruments.

Two of his pieces are going to the All Ireland Fleadh this August, including a banjo he will perform on himself.

The talented young trad musician Cillian Moran from the Rock of Dunamaise is also through to the All Ireland in Ennis, playing a harp custom made for him by Gerry.

A carpenter by trade, Gerry grew up in St John’s Square, Portlaoise.

He served his apprenticeship in woodturning, welding and milling in a company called Surecraft in Clonminam, before entering the construction industry.

It is only when his own children began playing in Ratheniska Comhaltas that Gerry decided to fulfil a lifetime ambition and joined it himself to learn to play the banjo five years ago.

“I picked up a cheap banjo and then I chanced making one myself. It ended up a nice instrument and people started asking me to make more,” he said.

He made a harp in 2012 and entered it in the Craft Council of Ireland competition in the RDS.

“Gay Byrne’s wife Kathleen Watkins played it and complimented it. I didn’t win a prize but that event gave me great ideas on developing my craft,” he said.

He has since made several harps, banjos, a fiddle and a rare instrument called a hammered dulcimer.

“It has 66 strings and three rows of octaves. It is an old Irish instrument, I am told a local person played it but has passed on. If anybody played it I would love to hear from them,” he said.

He uses the best of materials, with his harps costing about €4,000, and taking months to perfect.

“If you’re going to do it, you may as well do it right. I use cherry, maple and spruce, I use Camac levers and gold plated strings on my harps. If something is worthwhile, it will last,” the craftsman said.

He puts the same quality into his tenor and open back tenor banjos.

He is thrilled at his growing success.

“I am over the moon, I’m still jumping out of my skin. It is a great feeling to make something and play it, and have my friends like my playing. To be through to the All Ireland is a wonderful compliment, a great feeling,” Gerry said.

Last week he brought along a selection of his instruments to his local trad session in Maureen Culleton’s Iry House, Ballyfin, where he regularly enjoys the set dancing .

“The musicians played my instruments and they were all so surprised, I was delighted,” said Gerry.

He is hoping to now expand to a full time business, with a new workshop under construction and a website up and running.