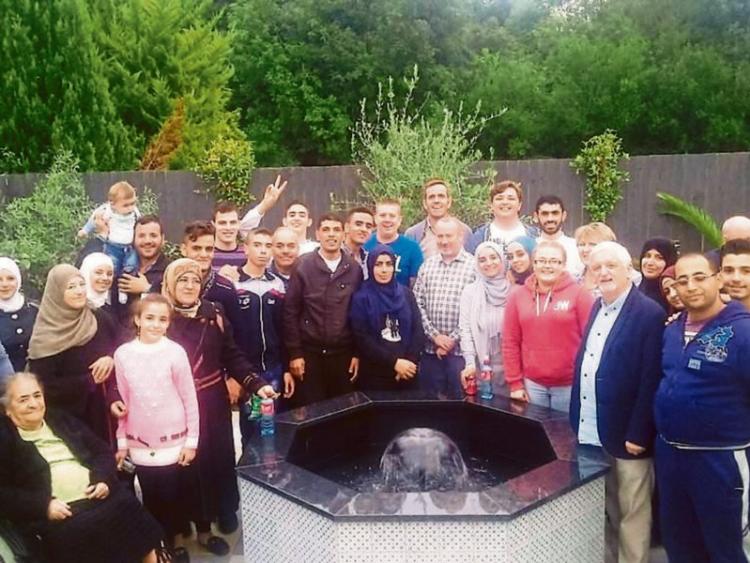 We eventually got there. Last Saturday saw the first group of refugees use the Syrian courtyard garden at the reception centre in Monasterevin.

An idea which was born towards the end of 2015 finally and officially came into being on Saturday evening. The route was circuitous, the process arduous in places. This, I guess, is the way of things undertaken on a voluntary basis.

When we started back in damp and dreary February we were not looking any further than the Hazel.

We had a small amount of funding to install the perimeter and the base material for the central paved area.

When we got these things done the reality of how difficult it would be to take it any further sunk in. We were at a point where we quite simply could not go any further without a significant injection of momentum and materials from somewhere. Anywhere.

It was at that point that we developed the idea of applying to Bloom 2016 to construct a version of the Hazel garden at the show, securing funding to do so and in the process giving ourselves access to all the plants and materials upon conclusion of the show.

Thankfully the response from Bloom was positive and we put together a great Show Garden in the Park over the June Bank Holiday weekend.

Typically a Bloom Show Garden has a life expectancy of five days but this was just the beginning of the story for our garden.

An important part of the narrative and message was the permanent home that the garden would eventually find back down in Kildare.

The role that the garden would play in providing a spiritual link back to their homeland for displaced and traumatized people was the central pillar of the entire endeavour.

And so the break down at Bloom had to be done with extreme care. No slabs could be broken, no plant could be damaged , the central octagonal water feature with its delicate Islamic patterned tile and polished granite cap had to be relocated with a delicate touch.

The troops had to be rallied, luckily I have some very understanding friends.

So once we caught our breath we committed the remainder of our summer Saturdays to putting it all back together in Monasterevin.

Some Saturdays were damp squibs some were roaring successes, the numbers were good some weeks, sparse others.

Some didn’t happen at all. But to everyone’s credit the will never wavered and the second wind that we have seen over the past month as the finish line approached has gladdened the heart.

So , plenty of thanks to dish out; to my wife Julia whose initial idea it was, Mick Power of Kildare Volunteer Centre who was pivotal to the whole project and all the volunteers who gave so selflessly of their time and skill; the great Paddy Hyland, Timmy Martin, James Mc Evoy, Patrik Weisser, Mary O’ Connor, Radwan Abouhajar, Edel, Catherine, Sean Kelly,Leo and Ally.

This is our stepping off point, the garden belongs to the residents now.

What we as a collective sought to say in volunteering was that we recognize the horror of what you have been through, we sympathize sincerely with your many losses, we profoundly hope that sooner rather than later you will be able to return to your homeland if you wish but in the meantime you are here, you are welcome and we hope your stay for however long it may be is as happy and as fruitful as it can be under the circumstances.

That’s what we sought to say, I hope that in some small way we managed to say it.