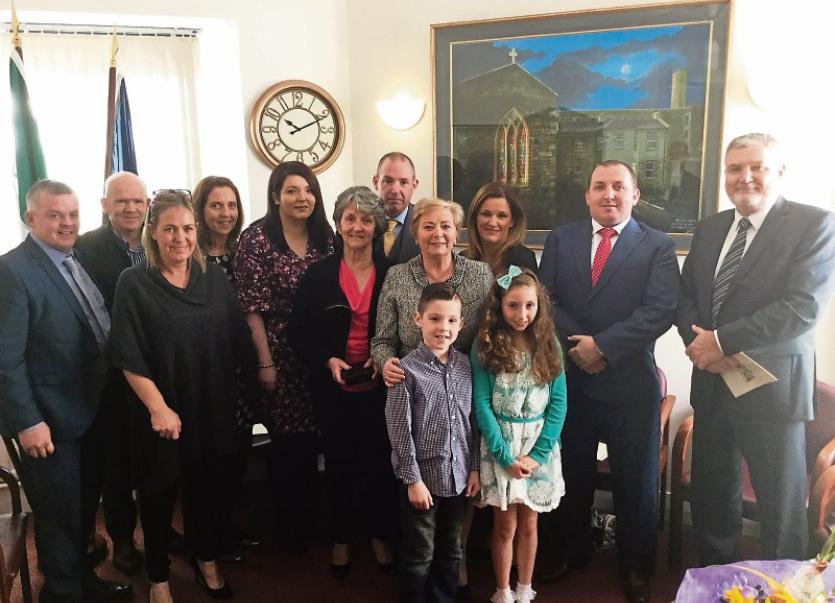 A local family has expressed their pride in the bravery of their father for his role in a prison break attempt by the Provisional IRA which was honoureed by the State last week.

The Tánaiste and Minister for Justice Frances Fitzgerald last week presented the Stack Medal to the former Portlaoise Prison Governor and Portarlington man Patrick Powell, RIP, in recognition of his bravery and heroic actions in November 1985 during the armed attempt.

During the attempt an armed prisoner pointed a firearm at then Assistant Chief Officer Powell and pulled the trigger, on two occasions, in an attempt to murder him.

The gun failed to discharge and due to the brave actions of ACO Powell and his colleagues, the escape failed.

At a private ceremony at Portlaoise Prison, the Tánaiste Frances Fitzgerald presented the award to Mrs Esther Powell, Patrick’s wife, who was accompanied by members of her family including her sons Pauric and Cormac, daughters Mairead and Dale and also Patrick’s brother Colm who also served in Portlaoise Prison.

Jessica Powell spoke to the Leinster Express on behalf of her family last week.

"It was a really proud morning and a huge honour to receive the medal from the minister. It was lovely to meet daddy's old colleagues and to hear the great stories they told about him. He was well liked and that became apparant on the morning," she said.

“It is important that people acknowledge daddy's contribution, it was monumental, he was in the thick of it. But it is important to mention that it was the same for all the prison officers, none of them ran away from it, all his friends were in the same boat.

“He rarely spoke of what went on. He was so committed to the job. The only holidays he took were spent on the bog. He left the job in the job, he never took it home. He was a great character, and a great dad and husband," said Jessica.

“It was a monumental time and dad was in the thick of it.” said Jessica.

Patrick's six grandchildren, Ruby, Lucy, PJ, Erin Lilly and Sadie, were all presented with medals inscribed with their grandad's name and the years he served,from 1974 to 2008, when he retired as governer of Portlaoise Prison. He passed away just three years after retirement.

The event was attended by Governor of Portlaoise Martin Mullen and members of staff from Portlaoise Prison and also the Director General of the Irish Prison Service Michael Donnellan.

The Medal was instituted in 2012 with the introduction of the Irish Prison Service Merit Award Policy.