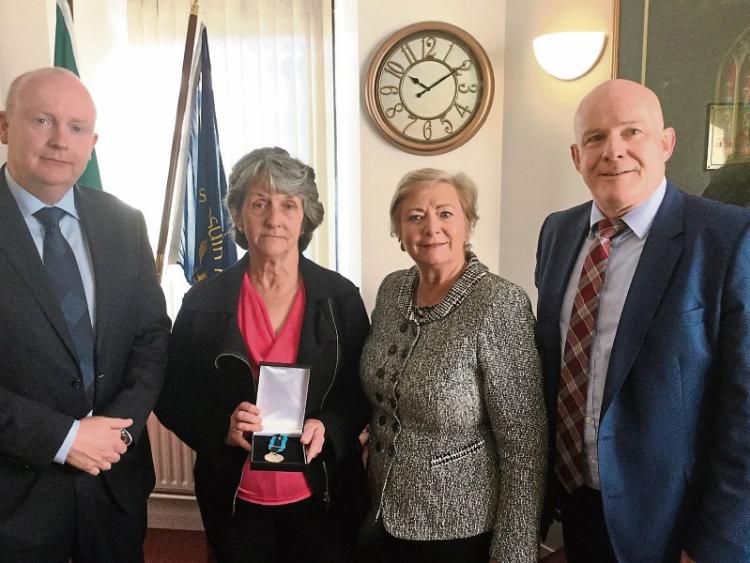 On the 24th of November 1985 a number of Provisional IRA prisoners attempted to escape from Portlaoise Prison using loaded firearms and explosive materials (semtex) which had smuggled into the Prison.

As Sunday morning Mass was about to commence the PIRA began in their attempt by holding staff on E3 landing at gun point. In his attempt to bring the situation under control Patrick Powell who at the time was an Assistant Chief Officer was singled out by an armed prisoner.

The prisoner shouted and threatened Patrick Powell pointing the gun in his direction. As the escaped was progressing the prisoner held the staff and particular Patrick Powell at bay and the plan was for a group of prisoners to make their way to the Main Gate.

There was great confusion amongst the staff and the military and a small group of prisoners reached the Main Gate very quickly where they had intended to blow the gates open with semtex.

Meanwhile the struggle to prevent further prisoners from escaping continued on E3 landing and in the process the prisoner while pointing the hand gun he had in his possession at the staff , he turned the weapon on ACO Patrick Powell and pulled the trigger in an attempt to murder him.

At this stage there was a loud explosion at the Main Gate. After some minutes the prisoner realizing the escape had failed handed the weapon to another prisoner who unloaded the gun and handed it to the Deputy Governor Ned Harkin.

The situation was then brought under control inside the E Block area. The explosion at the Main Gate had damaged the gate in such a way that the prisoners could not escape and they were brought under control and escorted back into the cells. ACO Patrick Powell showed great resilience and bravery in the face of adversity throughout this traumatic ordeal.

Such was his dedication to the service that he remained on duty despite being the victim of this harrowing ordeal which he had endured on the day.

He began his career in the Irish Prison Service on 28 September 1974 as a Prison Officer in Mountjoy. He was then transferred to Portlaoise in 1974 and was promoted to ACO in Portlaoise in 1979.

In 1986, he was promoted to Chief Officer 2 and subsequently to Chief 1 in 1995 serving again in Portlaoise.

In July 1999, he was transferred to the Curragh Place of Detention on promotion to Governor III but later that year, in October, he returned to Portlaoise as Governor II of the Midlands Prison. This also included an attachment to Portlaoise Prison keeping his long association with the maximum security prison.

On 25 January 2008 he retired. Unfortunately Governor Patrick Powell died in 2011.