Nicole gets rapturous reception at Coláiste Íosagáin in Port 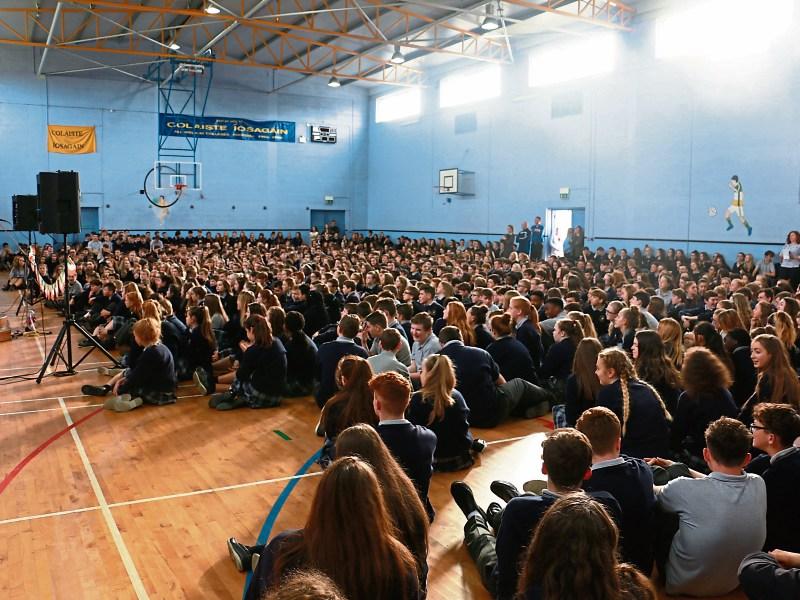 Nicole Turner returned school at Coláiste Iosagáin in Portarlington to a rapturous reception in the young paralympian’s honour.

First sitting on the ground amongst the crowd of almost 1,000 students in the GP hall, Nicole aged 14 had to be invited to take her place on the stage.

“To say we know her is great. The buzz, the excitement in the school while she competed, was unbelievable. She puts in such hard work and determination and training, and her infectious smile has won everyone over. To stand in front of the tv cameras, exhausted, and still smile and speak, and to say she got three personal bests over five races, and be the flag bearer, those are huge achievements,” she said.

The students chanted “let's go Turner let's go!” as they had done while watching Nicole's events live on the big screen in school.

She was presented with an engraved plaque by the Principal Seamus Bennett.

“Thank you all, for all the messages I got, the video of you supporting me really guided me on,” Nicole said.

Her mother Bernie was presented with a bouquet by vice principal Siobhán Higgins for being “one of the best mammies in Ireland”.

“Nicole proves that if you have a disability and you enjoy sport, if you work hard you can achieve your dream, and there's always Tokyo,” her proud mam said.

“It was nerve wracking for us for Nicole to come to such a big school, she is the only one in the midlands with Dwarfism, but you took her to your hearts, so thank you for that,” Bernie said.

Ms Higgins said Nicole has inspired staff and students to use their gifts and follow their dreams.

“How proud we are of a pocket rocket called Nicole,” she said.

“Today was unbelievable, I was really excited to come back, I would like to thank the school for all their support, they even fundraised to help with going to Rio,” she said.

She is taking a welcome break from training.

“I have been training solid for a year and a half. I was exhausted when I got home, but I've picked up now. I will start back competing in the new year,” she said.

She has a positive message to others with a disability.

“If you're good in sport, keep it up and you will get something out of it,” she added, also thanking the Irish Paralympic team for their support, and her Marlins swim coach Padraig Dolan.

“I couldn’t have done it without him,” she said.