The historic and the local 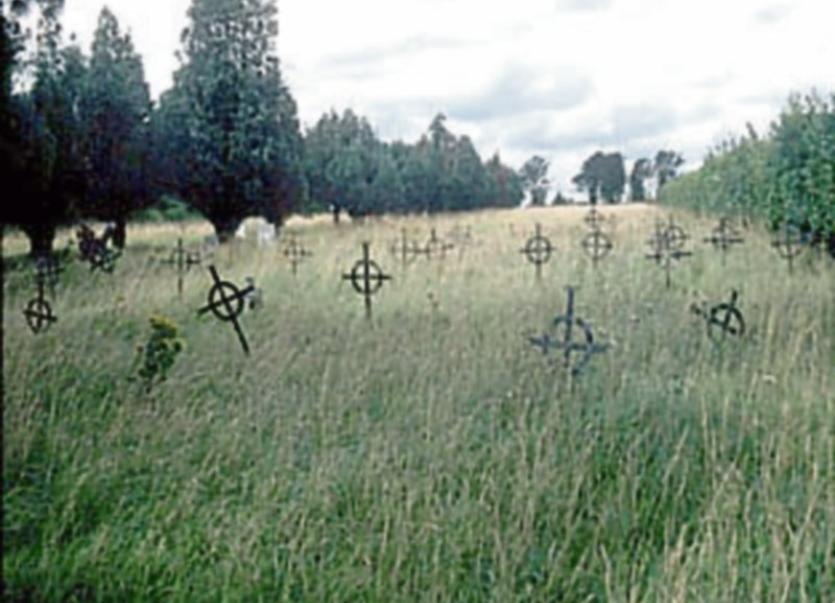 The projects are coming thick and fast

The last one was all about the contemporary and the global.

The next one is more about the historic and the local.

St. Mary’s Cemetery is located on the Ballintubbert Road in Athy.

The workhouse in question was built in the 1840s and is located a mere one hundred yards away across the Canal Bridge. It is now St. Vincent’s Nursing Home.

It is estimated that St. Mary’s saw 2000 – 2500 burials during The Great Famine. We can only hazard a guess as to the numbers of residents of the workhouse who went to their rest in the cemetery over more than a century of its operation, many of them children. Children of unmarried mothers; buried in unmarked graves. Removed from history.

Up until recently St. Mary’s Cemetery has been completely derelict. The grass, briars and weeds which covered the entire plot were six- foot high in places, the laurel around the perimeter was out of control and devouring every square inch it could, the two lines of yew trees up the centre were overgrown to a point that made the site impenetrable.

The cemetery had become a favoured site for some questionable nocturnal activities which included alcohol and drug misuse. At one point somebody had tethered a horse to the Cross adorning the top of the one and only monument in the Cemetery.

Enter the volunteers of Athy. The work which has been done in the last year is breath-taking.

The brambles, briars and weeds have been cleared and it is now possible to cut the grass with a ride on mower.

The invasive laurel has been cleared from the front, side and rear boundaries revealing a beautiful fieldstone wall. The yews have been cut right back to their stumps. It is now possible to walk St. Mary’s in its entirety, to breathe in the history, to feel the power and absorb the significance of the place.

And just as importantly, absorb the significance of its being allowed to fall into dereliction for so long.

Heritage, it seems, has become inextricably linked with coach tours and tea rooms.

We are curiously selective about the strands of it that we “protect”. That a site of the anonymous burial of thousands of our forebears is deemed to be less worthy of preservation than the palatial settings which symbolize the aristocratic delinquency that caused so many of those deaths is hard to understand.

Anyhow, now is the time to build upon the wonderful work of the volunteers, for St. Mary’s to take its next step.

To take its rightful place in the public consciousness, to assert its right to be considered as important a heritage site as Kilkenny Castle or Reginald’s Tower or Emo Court.

In conjunction with the Women’s Activity Group, Men’s Shed and Tidy Towns Committee and with support from the Kildare Wicklow Education and Training Board we are setting out on a project which we hope will properly acknowledge St. Mary’s and the forgotten deceased within its walls.

If we are, as we regularly like to proclaim, serious about our heritage, serious about confronting both the tragedy and the cruelty lurking in equal measure within our history then it is through facing the realities which are represented by places like St. Mary’s that we do it.

We’ve all heard the one about the cruel colonial overlords who left our people to starve on the roadsides, we all know that story.

Have you heard the one about the cruel indigenous overlords who left our people to rot in rancid workhouses?

Not as many have heard that story.

St. Mary’s Cemetery can tell both.

It’s time to help her find her voice.