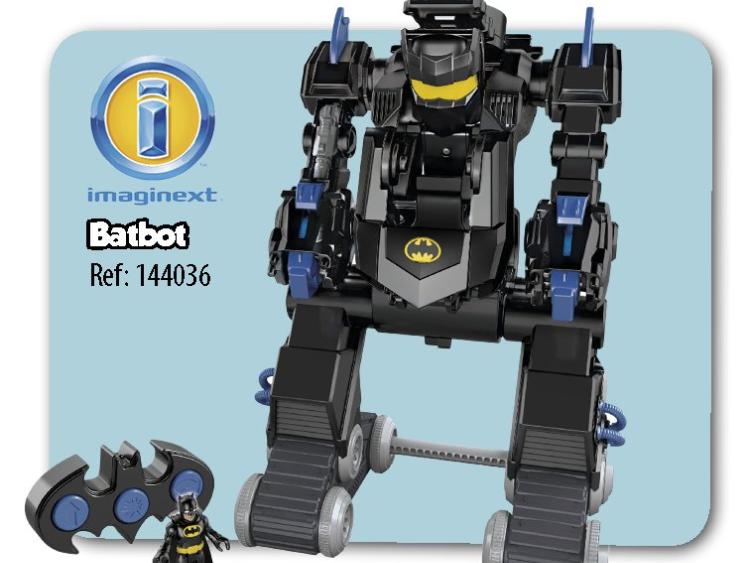 This two in one BatBot is a tank and a robot all rolled into one! This crime-fighting robot transforms to a cool "armoured" tank and back again just by turning the disk on the Bat Bot or by using the full-function remote control. Besides an awesome transformation, kids can continue the action by activating the claw or launching disks at their favourite Gotham City villains! (Villains sold separately). There are over 100 sound effects and phrases.  This is a must have for Batman fans!

Twist the accelerator and hear the sound effects as you move forward and side to side while you flash the functional LED headlights on this stylish and sleek BMW motorbike 12v ride on! This super realistic BMW GS ride-on is powered by a powerful 12v twin engine and is fully licensed by BMW.

This set comes with a female ATV driver, a male volcano adventurer and a male volcano worker mini figure so you can do lots of exploring in your LEGO City. Bring the heavy LEGO machinery to do exploring right!

Just in time for hugs! Trolls Feature Poppy is a loveable, colourful princess who always takes a break for Hug Time, no matter where her adventures take her. Inspired by the DreamWorks Trolls movie in cinemas now, Hug Time Poppy stands 35 cm tall and speaks 25 phrases when you press her tummy. She even plays songs from the film. Kids can wear a light up bracelet just like the doll’s -- when activated, their matching bracelets and the doll's hair all light up to the beat of the music. Give her a hug and join the fun!

Take your dollies to the park in style with the Dimples Ella Tandem Stroller. Both pushchair seats are reversible so you can change the direction your dolls are facing. The stroller includes a storage area underneath the seats to store all of your accessories when you're out and about. From the soft grip handle to the sun canopy and front swivel wheels the Dimples Ella Tandem Stroller is a must have for your dolls.

This clever re-make of the popular Pie Face game pits players against each other as they try to pie their opponent in the face! Players must load the hand with whipped cream (not included) or the included sponge. The suspense builds as players try to get the arm to move toward their opponent, and when it gets too close to the pie thrower, it'll spring up, and that player will get creamed! The player who doesn't get ‘pie-faced’ wins.

Shopkins Shoppies are the range of fabulously fashionable dolls and playsets! The Shoppies Popettes Popcorn Stop playset comes with a Popette Shoppie doll with exclusive outfit, five exclusive Shopkins characters, a Poppy Cooker, a mixing bowl, a popcorn box and a VIP card to use with the free app. The exclusive Shopkins characters are called Carmel Sauce, Pippa Popcorn, Kelly Kernels, Butter Bob and Poppino. The Poppy Cooker and accessories are compatible with all Shoppies dolls!

Let creativity be the guide to a building and gaming adventure – journey through unexpected worlds and team-up with unlikely allies on the quest to defeat the evil Lord Vortech. Play with different minifigures from different worlds together in one LEGO videogame, and use each other’s vehicles and gadgets in a way never before possible. LEGO® Bad Cop™ driving the DeLorean Time Machine…why not?! The LEGO® Ninjago™ Masters of Spinjitsu fighting alongside Wonder Woman™...yes, please! Get ready to break the rules, because the only rule with LEGO Dimensions is that there are no rules.