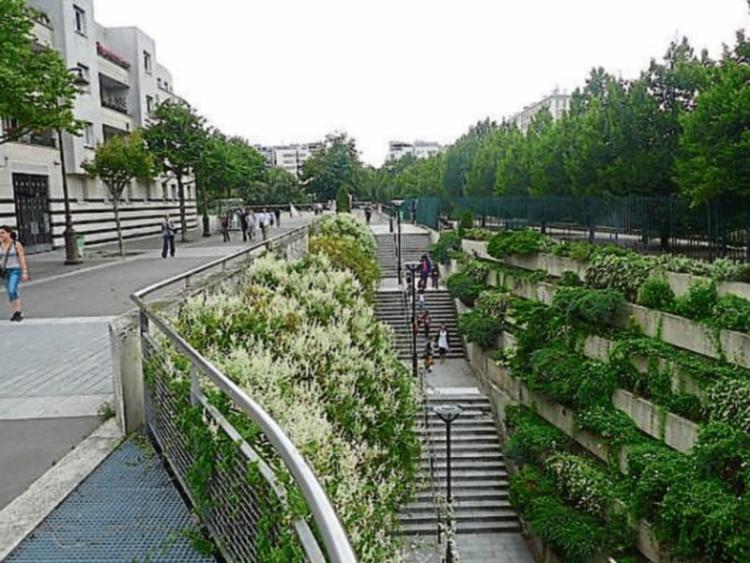 Urban greening is a subject I have repeatedly touched upon in these pages. It’s only a few weeks ago that we were singing the praises of the High Line in New York City, an elevated public park and greenway which was conjured up from a disused section of elevated railroad in Manhattan.

As mentioned, The High Line project owes a huge debt of inspiration to La Promenade Plantée in Paris.

Well now those Parisians are at it again. Paris differs from the other major cities with which we would be most familiar in that it has surprisingly little green space.

London is one of the greenest cities in the world with an abundance of spacious parks and New York can boast the unrivalled Central Park as well as The High Line and a range of smaller green pockets.

Paris is at it again because, unnoticed, a new licence scheme was launched on July 1st 2016. Essentially, the new programme is a license for citizens to ‘vegetate as much as you want‘.

The French capital has set a target to increase the amount of green space in the city by 100,000 hectares by 2020.

Greening up walls, roofs and streets are all part of this plan. Furthermore, there is an aim that a third of these new spaces will be devoted to urban agriculture.

To help the administration to reach this target, ‘citizen gardeners’ are being encouraged to plant up the smaller spaces in their immediate environments whether it be where they live, work, along their commute, where they walk their dog. Wherever.

The licenses, issued by the city, last for three years. Parisian citizen gardeners will be able to vegetate and adorn the streetscape in various forms.

What this consists of is at the discretion of the gardeners themselves and could be fruit trees and edible planting, vertical planting on walls and the sides of buildings and street furniture, in the soil at the base of trees, lamp posts. It doesn’t matter.

A planting kit, including topsoil and seeds, is provided to help the citizen gardeners to get the ball rolling.

In return, they agree to three fundamental principles: plant with dynamism and colour to encourage pollinating insects, eschew the use of any kind of herbicide or pesticide, maintain the appearance and health of any green spaces that they plant.

The city wants to harness the creativity of citizens. It especially wants to see imaginative installations, on fences, facades, structures and street furniture. The softening of the hardscape is the overriding thrust.

It is interesting here that we are seeing more and more official involvement in schemes such as this. A few weeks back we mentioned The Lammas Project in Pembrokeshire in Wales and how vested the local authority is in its success or failure providing, as it does, so much momentum and oversight of the entire endeavour.

In a differing way and on a differing scale we see a similar philosophy at work here. It is simply to do with the empowerment of people to take on projects which enhance the streetscape and contribute so indisputably and fundamentally to mental well-being.

I have long lamented the pitiful state of most of our common areas and public spaces. Initiatives such as this have the power to place their rectification back in the hands of individuals.

With this scheme, Paris is leading the way in Europe and perhaps the world. Green walls and green roofs have increased on new developments in the city.

We mentioned La Promenade Plantée which runs from La Bastille to the Jardin de Reuilly and was the inspiration for the much lauded New York equivalent. Such projects demonstrate Paris’ commitment to becoming a green city. But it is this new attempt to capture the spirit and imagination of the average citizen that could well prove to be the most significant greening move of all.