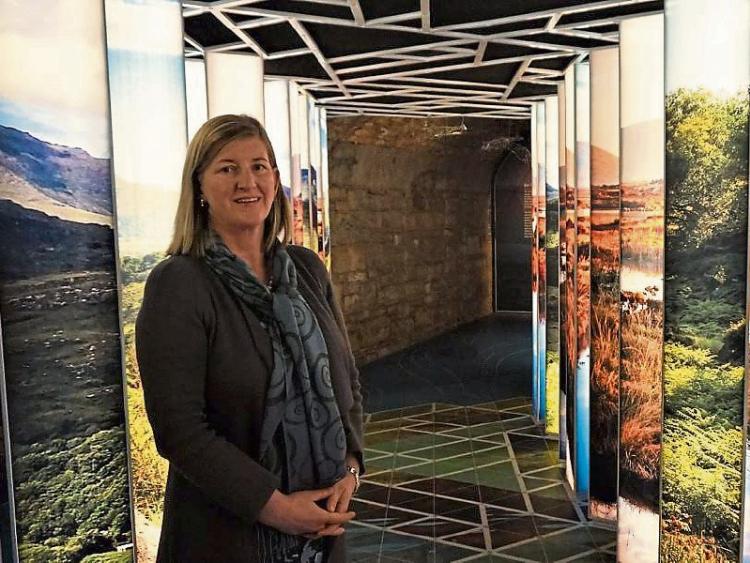 EPIC, The Irish Emigration Museum on Dublin’s Custom House Quay, is brimful of Laois connections, past and present.

Its Director of Sales and Marketing is Aileesh Carew who lives in Ballyadams.

She was the former manager of the five-star Ballyfin Demesne.

“The vision of EPIC, the Irish emigration museum is to be the essential first port of call for all visitors to Ireland and to be an important part of school field trips.

“We are delighted to see that over 50 per cent of our visitors are Irish and we had lots of families in over the Christmas period,” she said.

The €15 million investment is the biggest attraction the capital has seen since the Guinness Storehouse, according to Ms Carew.

The interactive museum, which is just minutes from the city centre and Connolly Station, also highlights many local people who made their mark internationally down through history.

In the belief gallery, visitors are introduced to Wellesley Bailey who was born in Abbeyleix in 1846 during the Famine.

He got engaged in 1866 but vowed not to marry until he made his fortune. After unsuccessful attempts to forge a career in Australia and New Zealand he relocated to India in 1869 and got involved in missionary work as a teacher in Ambala, in the Punjab province.

There he first encountered leprosy sufferers and he felt that "if ever there was a Christ–like work in the world it was to go amongst these poor sufferers and bring them the consolation, the hope of the gospel".

In 1871 his fiancé Alice joined him in India before they both returned to Ireland in 1873 because of Alice's weak health.

Largely as the result of accounts he gave of his encounters with leprosy sufferers in India, the inter-denominational Mission to Lepers - later the Leprosy Mission - was founded in Ireland. He became secretary, then superintendent of the mission. He and his wife undertook strenuous tours, which spread from India to China. Today the charity still continues its work in Asia and is headquartered in Belfast.

Remembered for his leadership is Peter Lalor, who grew up near Raheen.

He rose to fame for his role in the Eureka Stockade, an event controversially identified with the "birth of democracy" in Australia.

Lalor had emigrated to work on the Australian gold mines of Ballarat in 1854.

The Eureka Stockade took place in the December of that year as a protest against British colonial authority and unfair treatment of workers, the main issue being that workers had to be licensed and could not lay claim to the land they worked.

Twenty-two miners died in this standoff between workers and police. Although the workers were overwhelmed by government force, all their demands were later met. Lalor injured his arm in the struggle, and it had to be amputated.

He later took a seat in the Australian Upper House as an MP for Ballarat, where he campaigned for workers' rights.

He did not win much popularity, however, because of his conflicting stances on land reform and immigration.

His brother Richard also became an MP for Queen’s County in the British House of Commons after joining Parnell’s Home Rule Party in 1880.

Less well known is John Kinder Labatt who was born in Mountmellick, in 1803, the descendant of Huguenot immigrants from Bordeaux.

In 1833 he married Eliza Kell, a relation of the Norwich banking magnate, Daniel Gurney, at Twickenham, Middlesex.

The Labatts then immigrated to Canada in 1834 and John initially established himself as a farmer, buying a 200-acre plot near London, Upper Canada.

In 1854 Labatt bought Eccles shares upon his retirement and renamed it the London Brewery.

He became an important member of London’s civic society, sitting on the town council and spearheading civil projects such as the London and Port Stanley railway and the London Permanent Buildings and Savings Society.

A real game-changer, Johnny Farrell also known as ‘Smiling Johnny’ or ‘Handsome Johnny’ is best known for winning the U.S. Open in 1928 after beating the legendary Bobby Jones at the last moment with an 18th hole birdie.

During his career he won 22 PGA tours. He was born in White Plains, New York, where his parents emigrated to, shortly after their marriage.

They likely emigrated to the US c.1892 and were married in New York in 1894 in Manhattan, New York.

The exact location of Johnny’s birthplace in Queen’s County - modern Laois - has not yet been determined by the museum. Any reader with information on the matter is asked to contact the Museum Curator, Nathan Mannion.

He lived with his grandmother and her husband at Farmleigh just outside Abbeyleix in 1919. The Irish-born figurative painter was known for his bold, grotesque, emotionally charged and raw imagery.

EPIC which is located at The chq Building, Custom House Quay, Dublin 1, is open seven days a week. Further information is on www.epicchq.com.