Giant redwoods in the heart of Emo 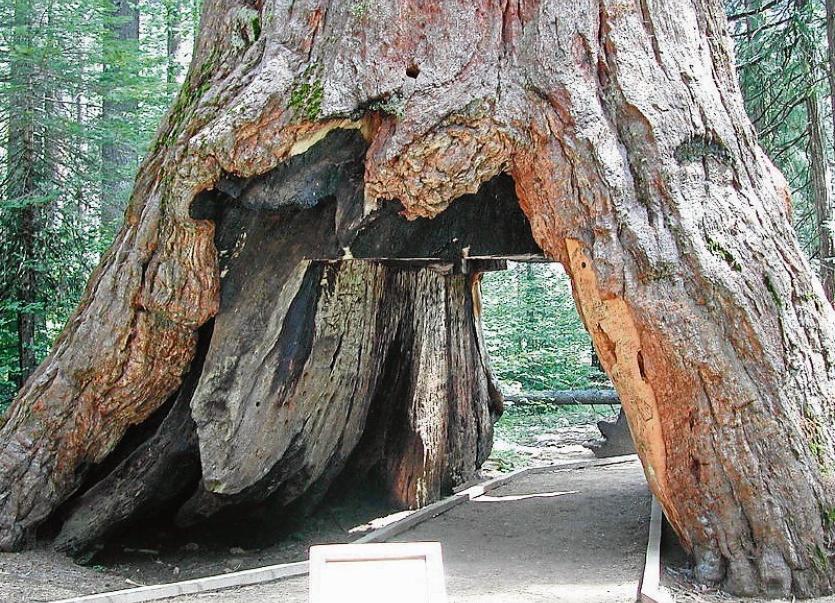 When I lived in the USA there was a popular SUV on the road, the Toyota Sequoia.

At the time, being young and misguided, I didn’t know what a sequoia was, what it meant. I presumed, just from the pronunciation and spelling of the word, that there was some Native American connection.

Anyway, long before I knew what the word meant I knew that I loved it, I knew that it conjured up an essence of the great outdoors, romantic images of trekking in impossibly beautiful but unforgiving wilderness in the Pacific North West or the mountains of New Hampshire. It is another great example of the power of our language, its power to conjure and evoke potent connections, suggestions and associations from the merest hint.

I remember consciously not looking up the meaning of the word for a long time after I first came across it on the rear fender of an intimidatingly large Japanese four wheeled drive sport utility vehicle. I think on some subconscious level I was afraid of being disappointed.

I was afraid that it would turn out to be some soulless corporate concoction, some invention of the lads and lassies in the marketing department carefully calibrated to conjure up romantic notions in the impressionable heads of eejits like me. I mean, you wouldn’t put it past them.

And then one Saturday evening about three months after my first encounter with the word as my then two-year-old son was flicking indiscriminately and obliviously through television channels he landed on a programme about the Sierra Nevada mountains in Southern California. And that was it. I gorged on the sequoia, and it didn’t disappoint.

Turns out the sequoia could very comfortably live up to all the seemingly impossibly grandiose notions that I had devised for it in my head. And I can reliably state that it is the only occasion, since the release of From Langley Park to Memphis by Prefab Sprout in 1988 where the reality matched the elaborate fantasy suggested by its name and further embellished by my imagination.

So what is it? Well it’s, eh, a tree. That’s right but not just any tree. Sequoia is a genus of redwood coniferous trees in the subfamily Sequoiodeae of the family Cupressaceae. Giant sequoias are the world's largest single trees and largest living thing by volume. They are an awesome, inspiring, monumental, other worldly thing.

We probably know the sequoia better as the Giant Redwood and the aforementioned Sequoia National Park in the Sierra Nevada mountains in California is famous for them. And not just any redwoods; it is home to five of the ten largest trees in the world, the oldest known living sequoia at 3500 years old and the Tunnel Log - a fallen giant sequoia tree that measured 275 feet in height and 21 feet in diameter which fell across a park road in 1937 due to natural causes. The following year, a crew cut an 8-foot-high, 17-foot-wide tunnel through the trunk, making the road passable again.

And it is recent news of the demise of California’s other Tunnel Tree, a living one in the Calaveras Big Trees State Park in the Northern Part of the state that prompted me to think about sequoias again this week. The tree, which had a 10-foot square tunnel carved through its trunk in the eighteen eighties collapsed in a winter storm at the ripe old age of one thousand years.

Nathan Heller, who grew up close to the Park wrote in the New Yorker “Any tribute I could give it would be fatuous; the tree was older than the language in which I can write.”

But don’t think that Sequoiadendron giganteum are the preserve of Californians, we have a lovely selection right on our doorstep lining the avenue at Emo Court.

Although they are only getting out of nappies at a mere hundred and sixty years old.

No panic getting out to have a look at them, they’ll be there for a while.