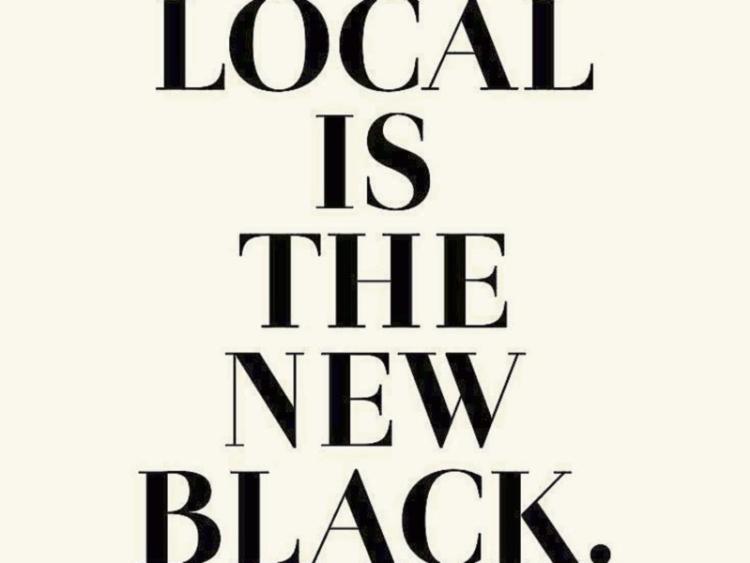 So, what do you know about hyperlocalism? Not much, if anything. Well in that case you are in the same boat as I was in up until last Saturday.

Last Saturday night at about quarter past nine when most fully functioning adults are out in pursuit of some form of real world alcohol related cultural enrichment, I was at home opening a tweet from a Garden Design magazine which I imagined was just about to open the door for me to the realm of hyperlocalism.

Narnia, as I thought, for the adult organic enthusiast.

Right so what is it? Well, therein lies the source of much confusion and ensuing hilarity.

Because I assumed from the context, a tweet from a Garden Design magazine, and without reading the follow up link that what we were dealing with here was a recently concocted term to cover all those zeitgeisty organic matters such as local sourcing of materials, concern over the provenance of food items, avoidance of the carbon production associated with movement of goods a long way.

All those ultra-cool, eco things.

But never one to be accused of being negligent when it comes to fact checking I jumped over to dictionary.com to get the definitive low down.

Except you won’t find any definition on dictionary.com that’s even close to my interpretation.

That’s how new it is, says I to myself. The paint isn’t even dry on the hoarding surrounding the kingdom of hyperlocalism, on the electric fence sectioning off the hyperlocalist from the remainder of humanity.

But no, it’s there all right. Hyperlocalism is covered as follows: “Hyperlocal connotes information oriented around a well-defined community with its primary focus directed toward the concerns of the population in that community.

The term can be used as a noun in isolation or as a modifier of some other term (e.g. news).”

But it could easily have been my definition.

It could easily have been something like: “Early twenty first century movement concerned with countering globalisation and homogenisation”. It’s pure zeitgeist; it combines hype with local and coins a brand-new way of describing something which was already perfectly adequately described.

So, I was torn. There it was; an immovable definition for one thing which I knew in my heart should have been something completely different.

The thing was snowballing and it was starting to occupy this unique niche as being a very ‘now’ sounding term that should exist for an entirely different purpose to that for which it does exist.

It was becoming very confusing. A misappropriated, misallocated, misdirected label.

So, what I am proposing is nothing less than a complete and utter redeployment of the term hyperlocalism. Because this news related definition is only nonsense.

Hyperlocalism beautifully describes where we are at. We need this phrase to do more for us, to work harder, to live up to its billing. We need to wrest control of this word back from where it has errantly been squandered all this time.

You know the way you buy your spuds from the local farmer and if someone forced you to describe such activity the best any of us would come up with would probably be a word such as ‘loyalty’. Well, under the new regime we are obliged to call that hyperlocalism.