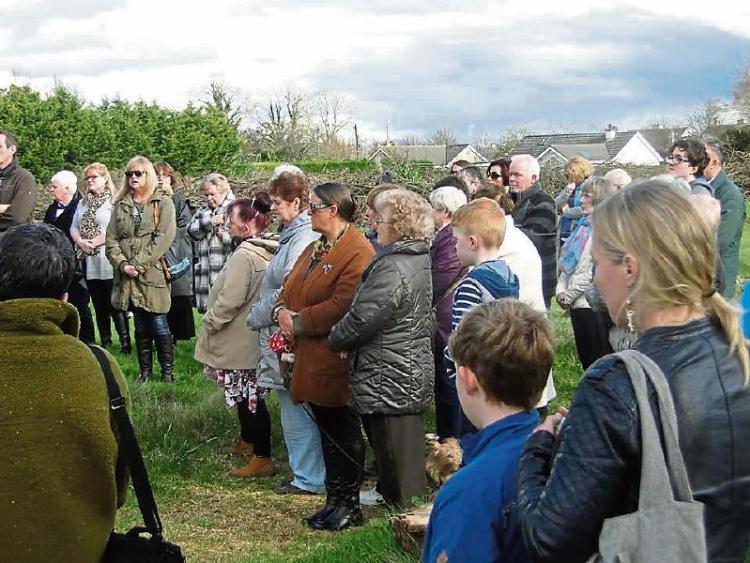 So, we have reached the end of our leg of the project. Last Wednesday we had the Multi- Denominational blessing in the Cemetery and reception in St. Vincent’s Hospital to mark the culmination of the Community Education strand of the work in St. Mary’s Burial Ground, Ballintubbert Road, Athy.

I call it a strand because what we did is just one more leg in the relay that is the envisioned work in St. Mary’s.

The vision of Michael Donovan and the Cemeteries Committee. It was their initial effort upon which we piggy-backed to carry out our modest portion of work.

The heavy lifting had already been done by the lads in cutting back the out of control yew and laurel that had rendered the site virtually impenetrable.

Speaking to Michael last week it is clear that there is a coherent vision for the future of St. Mary’s and a definitive point to which he wants to get before he will even contemplate calling it done.

Removal of piles of brush, dealing with the remainder of the yew trees and stumps, repairing the perimeter fieldstone wall, more planting. Lots done but clearly plenty more to do.

It’s been a great few months. And there is no doubt that the enrichment has been amplified by the unique place that I think St. Mary’s occupies in our national story, the special vantage point that I think that it has.

St. Mary’s can tell two stark, parallel but wildly different stories in relation to a vast swathe of time from the 1840s right up to the present day.

What we did was modest.

The culmination of our project formed part of this year’s Adult Learners Festival.

Adult learning is an entire realm into which I have only come in contact within the past couple of years. And what a world has opened up, a world of which Community Education is just one part.

Because what Adult Education in all its forms and guises demonstrates clearly is that the old assumptions are often completely misguided and downright wrong.

There are many reasons why someone might need to redirect at a later stage of life. It is important that the framework exists to facilitate that.

A framework free from the pressures and anxieties of ‘school’, a system that failed so many and left residual damage to the point that it is only in later life that some can seek to re-engage with any form of learning environment.

Community Education is a pivotal component of the wider Adult Education strategy.

The five diverse and fantastic projects that comprise the KWETB contribution to the Adult Learners Festival are all Community Education initiatives.

Programmes initiated by local people to serve a need in their local community. A force for positivity and wholesome, goal driven learning and enrichment.

So now it’s all over. I will miss the camaraderie, the sense of a common mission and shared vision; to use whatever means at our disposal to bring people together in pursuit of an agreed goal, however modest.

All the participants in this year’s festival can speak glowingly of the great memories and friends made that will never be lost. As Margaret Wheatley once famously said, “Whatever the problem, community is the answer.”

Thanks to KWETB for such a great initiative and to all the participants in all the programmes from whom we learned so much.

A special word for our dynamic duo, supercharged volunteers Geraldine O’ Neill and Liam Regan who proved to be the engine of the entire endeavour.