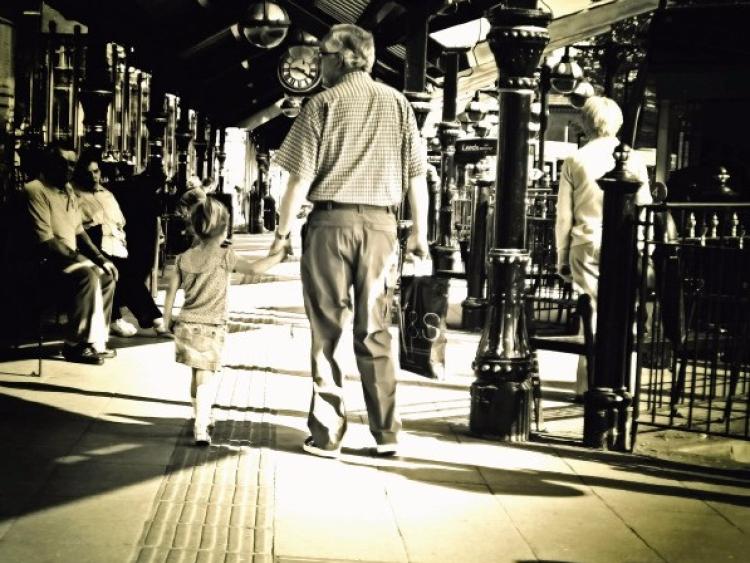 It's Just a Phase

I’m a green eyed monster. Jealous as hell. There I said it. My kids have three wonderful grandparents who adore them and spoil them rotten but I can’t help feeling they are missing out.

My own father died over six years ago before I was married and long before Aidan and Sarah graced us with their presence. I miss him terribly but to his credit and my mother’s, by the time he left us I was a fully functioning adult, living away from home for years and getting by just fine.

I was insanely close to him. Now we had our moments during my teenage years but that’s par for the course. He was a fantastic friend, my biggest fan and had serious influence in almost everything I did in life. He rarely steered me wrong.

Now sometimes when I think of him I’m really angry. Not angry at him but bloody well pissed off that Aidan and Sarah don’t have him in their lives. And when I see other people’s kids out with their granddads envy engulfs me.

I think when someone close to you dies your opinion of them can be slightly skewed. You put them up on pedestal but when I think of what he might have been like as a grandfather, I genuinely believe he would have been a cracking one.

I have visions of him parading Aidan round the local pub (the beloved local!) with pride. I am aware taking children into the pub is frowned upon these days but that’s how he rolled. Now he wouldn’t have had him in there at closing time or when the Guinness went to his head and he took a fancy notion to indulge in a brandy and Bailey’s mind you! I hope so anyway!

He worked in the retail business, mostly in clothing and owned a shop or two in his time. Now his fashion sense wouldn’t have been the best, contrary to what he thought himself! He would frequently go to the UK on buying trips and I have no doubt in my mind that he would have returned home laden down with outfits for Aidan and Sarah, outfits that I’d duly accept but never in a month of Sundays put on the kids. Remember what I said about his fashion sense! All the while he’d lecture me on spending anymore than a tenner on any piece of clothing for them, as sure aren’t all clothes made out in the Far East and jaysus the mark up on them is only ridiculous!

I like to think he would have instilled a love of sport in Aidan and Sarah, like he did with me. Sidelines were more of a feature of my childhood than anything else and it was actually soccer he reared me on. We travelled the world together and kept it real at times too with the odd League of Ireland fixture! He never once applied the girl stereotype to me and I would like to think the same would have been applied to Sarah.

Reality might have been a whole lot different though. He might have cursed me if I brought them over to visit too much and would most definitely have told me to ‘put manners on that fella’ (Aidan)! And heaven forbid he’d have to switch the channel and put on a cartoon for the grandson! As for opening a dirty nappy around him, well forget about it.

I think about all the other parents who have lost a parent or even two before their children were born and wonder do they think along the same lines. Are they as angry as me? Perhaps. But that’s life I guess.

To those of you that are blessed to have both parents in your life and in the lives of your child or children, cherish them. Really, really do. Let them teach them, let them spoil them.

I heard a saying recently that a grandchild fills a space in your heart that you never even knew was empty. In Aidan and Sarah’s case there’s a little space in their hearts reserved for him. I’ll make sure of that.