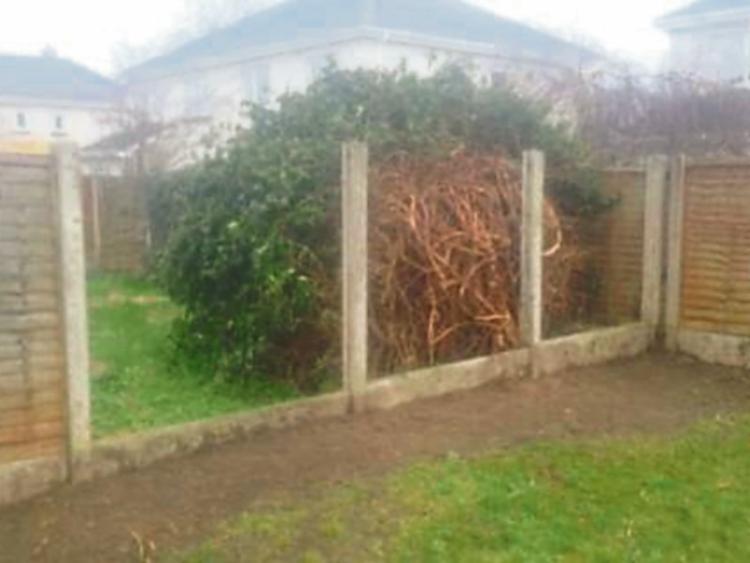 That gigantic clump of out of control vegetation (pictured) is a honeysuckle which was untended for around 15 years.

Actually, to be more accurate, what you see is approximately half of an out of control honeysuckle that was planted around the time Mick McCarthy and Roy Keane were dividing the nation with their antics over in Saipan. Yes, that long ago.

When I took the photo during the recent garden renovation we had already removed any of it that was on the near side of the fence, the side on which it was originally planted. Honeysuckle, as we all know, is a climber and the original logic of planting it against the fence was that it could be trained and tied in such a way as to spread and cover or ‘soften’ the fence, provide colour and scent.

Which is all grand. A great and noble idea and one that, annoyingly, requires a bit of work and input from the homeowner to prevent it from turning into a malevolent, twisted, gnarled, spherical monster at the bottom of the garden.

The honeysuckle liked that spot, it made itself at home very quickly and wasted little time in doing its thing; growing at a prolific rate. The aspect is favourable. The soil, surprisingly for a development of houses constructed within the last two decades, is rich and well drained. We are more accustomed to putting a spade in the ground only to unearth a collection of broken bricks, empty cement bags and assorted detritus left as some sort of demented time capsule by that most benevolent of all species; the ‘developer’. Here we had actual soil which the honeysuckle loved so it went ahead and did what it is genetically programmed to do: grow through and over the fence to begin the process of annexing the neighbour’s garden.

As can be seen from the photograph, there are three fence panels missing. They are missing because they were subsumed by the plant, enveloped to the point that they came away with it, tangled to inextricability. What we did next was remove the remainder of the plant from the neighbouring garden and replace the trashed fence panels. With the porous border sealed up we could now get on with our work; providing the homeowner with a garden that they stood some chance of managing.

And thus I arrive, albeit circuitously, at my point: maintenance. Every homeowner I speak to will inevitably come to the process armed with one, or both, of the following phrases; ‘low maintenance’ or ‘zero maintenance’. I can’t think of anything on this earth that requires zero maintenance, to think that it is a concept that is achievable in as dynamic a setting as a contemporary suburban family garden is utterly preposterous.

Attitudes to maintenance, where a person stands on the whole issue gets me very quickly to being able to appraise the fundamental motivation of a homeowner, their inherent suitability for the task of managing their outside space. The motivation is a pivotal point here. Why do you want your garden redesigned? Is the TV telling you to do it?

A honeysuckle doesn’t get out of control overnight, over a weekend or even over one summer. It requires a prolonged period of sustained and determined neglect to get it to the point that it poses a threat to the neighbourhood.

Maintenance requires commitment. So does neglect. Remember our dearly departed West Dublin honeysuckle and when it was planted, the summer of Saipan. I know you chose a side back then, you were in one camp or the other.

You looked into your heart and your conscience, you agonised and you chose a side. Well, this is a question that requires just as much soul searching, torturous introspection and deliberation.