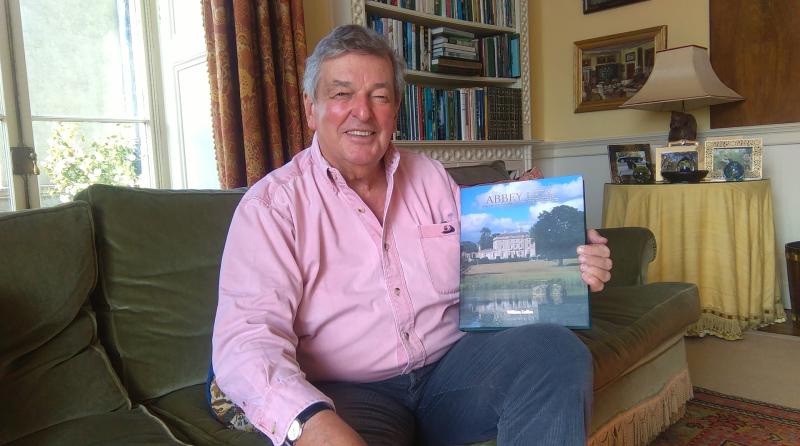 The owner of Abbey Leix house and demesne has launched a beautiful book detailing its long and fascinating history, right up to its present restored glory.

Sir David Davies, a wealthy banker and businessman who grew up in Wales and Wicklow, bought the house and 1,200 acres of the demesne from Viscount Tom De Vesci in 1995.

At that point the De Vesci family had taken the difficult choice to sell their 250 year old home, faced with £1.5 million in death duties, and a quarter of a million needed for repairs.

It was through the Earl of Rosse at Birr Castle that Sr David heard it was for sale.

“Myself and Brendan were at Oxford together. He called to tell me this lovely home would be for sale, and had I any friends interested in buying it. I had a look myself and bought it, I had a growing family and a large collection of Irish fine art,” Sir David told the Leinster Express, sitting in the warm sunlit library, where an Abbeyleix carpet graces the floor.

He explains that Tom De Vesci kept a couple of hundred acres and a cottage for his family from the estate.
“He attended the book launch, and I feel he is delighted that the house is in good hands. I told him I consider myself a patron for the long term, rather than an owner for the short term. I have four children and I intend keeping it going for a while more,” Sir David said.
“The original restoration took four and a half years, it had to be be completely rewired, there was no central heating. Every window had to be replaced or restored, 117 of them. We moved in for Christmas 1999, just before the millennium, and we have lived here as a family ever since” he said.

He also began a restoration of the grounds, which now includes the restored formal gardens and lake, a stud run by Brian Killeen from Portlaoise, cattle farming and tenanted houses, as well as ancient and new woodlands.
“We have a lot of wildlife, red squirrel, hare and fallow deer, it’s a little oasis.It's a family home, I wanted it called a home and not a house in the title, because that is what it is to me and my family," Sir David said.

He was born in Wales, a son of a steel baron who had been knighted for his support of the arts.
“I’m a blow-in, I was brought to Ireland by my parents in 1947, they bought a home in Wicklow, Killoughter. It’s a smaller Georgian house. It was left to me, I still own it,” he said.

He commissioned the book on Abbey Leix from esteemed author and expert on Irish art and county houses, William Laffan.
“It grew from being a record of my time here, to a full history, from the 12th century when the Cistercian monks built an abbey that lasted until the 16th century. It was bought in the 17th century by the De Vescis’, who finished building the house in 1773,” he said.

The book was launched last week in Trinity College Library, co-hosted by Paddy Prendergast, Provost of Trinity College. Also attending were tree expert Sir Thomas Pakenham, Lord and Lady Rosse, Viscount de Vesci, and members of the Irish Georgian Society, of which Sir Davies is president, as well as being president of the Wexford Opera Society.

Among the treasures it reveals, is that the estate contains the oldest oak in Ireland, aged 750 years, and the tomb of Malachy O'More, Prince of Laois.

The gardens are opened to the public twice a year, for charity fundraisers run by Portlaoise and Abbeyleix Lions clubs.
A book launch is to follow in Abbeyleix, but copies of the book can now be purchased through the estate office, call (057) 8731961.