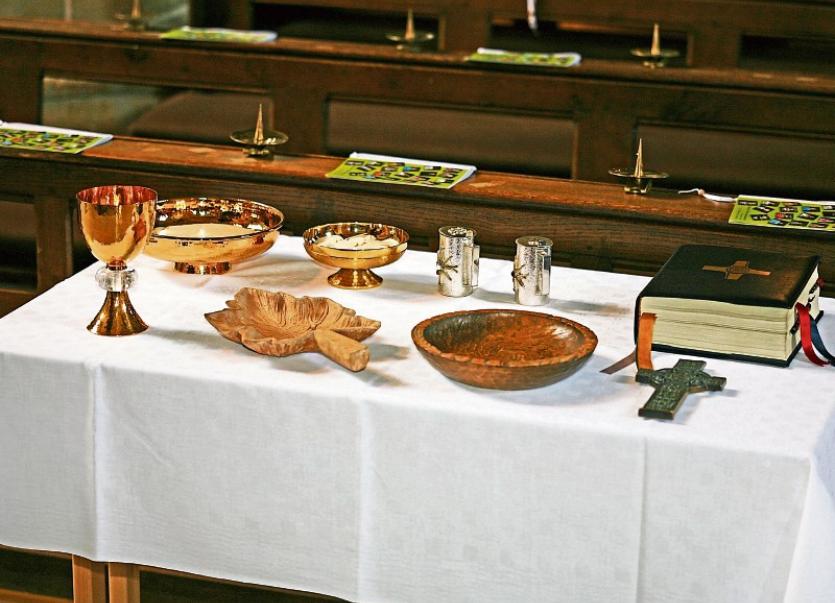 Let's talk about mass. Now let me be clear, I’m not going all religious on you but we have recently returned to mass after a long hiatus.

Both Sarah and Aidan were christened in to the Catholic faith and I feel I at least should give them a start in it and let them make their minds up when they are old enough.

They will most likely go to a Catholic school, they will receive communion and confirmation and I don’t want them completely and utterly clueless about the whole thing. But anyway, that’s enough explaining.

So every Sunday for the last couple of months we make the short journey from the gaff to the church. For the first few weeks it was just myself and the kids because Daddy Chambers sometimes plays football on a Sunday morning. That wasn’t going too well, so lately we’ve had all hands on deck and all four of us head off for a bit of a sermon.

The bloody stress of it all! In all seriousness, how the hell am I supposed to keep two toddlers quiet and sitting still for a full half an hour? Impossible. Well it is for my two anyway.

I have them pre-warned to keep stum in mass but Sarah just loves the echo in the church and makes random noises for the half an hour. At the top of her lungs I might add.

And then Aidan thinks the pews are for climbing on and the wicker baskets for the collection are for his amusement.

Instead of putting ‘his’ money in, he’s much more inclined to take whatever is in the basket out and informs me we are stopping at the shop on the way home! I must work at drilling that thou shalt not steal message into his brain!

I clearly must look stressed to the hilt after mass because I’ve lost count of the amount of women who have approached me to tell me not to worry about the noise or the fact that they won’t sit still; ‘sure wouldn’t it be worse if the couldn’t make noise or couldn’t run around’, I’ve been told on countless occasions!

These lovely parishioners and indeed the priest have told me that nobody minds or pays any heed to noisy children in mass. Well they must think I came down in the last shower!

Every week there’s always one auld fella or auld one that almost give themselves whiplash when turning round to throw a dirty look our way. It’s at that point I want the ground to open up and swallow me.

And then of course there’s the ten times during the sermon that Aidan needs to go to the toilet. I know full well he’s crying wolf for at least nine out of those ten times but I just can’t take that chance. The last thing I want is an accident because I reckon the filthy looks at that point just might split me in two!

And of course you try explaining to a three year old that he can’t have communion. Every week he comes to the altar with me and patiently queues up for food, as he calls it. And of course every week he doesn’t get food and you guessed it, every week there’s a meltdown because he doesn’t get it. Then he consoles himself by the fact that he can go and get money from the basket and get something in the local shop on the way home. And when reality hits, isn’t there another tantrum.

He has also recently spotted people blessing themselves with the holy water on the way into and out of the church so he’s hell (probably not the best choice of word in this instance!) bent on getting in on that action. Except he thinks it’s a sink and attempts to wash his hands in it, drink from it and splash his little sister. And don’t get me started on the candles. Just don’t.

So in short, the whole half an hour can feel like four hours, a lot of folks hate to see us coming but we are going to persevere.