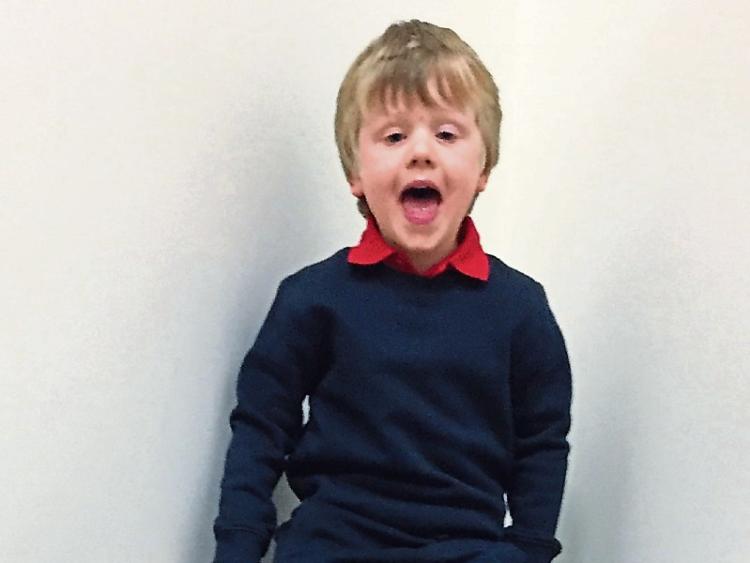 This time last year I wrote a column all about Aidan heading off to playschool for the very first time.

I need not have worried. He flew it. He loved playschool.

He’s off to a new playschool this Thursday though. I’m not as worried as I was last year but he, himself, is slightly nervous.

He’s off to Naíonra Bhóín Dé, an all-Irish playschool beside the Gaelscoil in Newbridge.

In 12 months, though, my little boy has come on in leaps and bounds. He doesn’t have a speech delay anymore, indeed he never stops talking now.

He can count to ten as Gaeilge, has bainne going to bed and his favourite nursery rhyme is ‘A haon, a dó, muc is bó’.

We’ve been speaking the cúpla focal a lot at home and he just picks it up effortlessly, so I have no concerns about him heading off on Thursday.

So why Naíonra Bhóín Dé and hopefully Gaelscoil Cill Dara next September?

There are a number of reasons.

Firstly is the fact the Grandad Chambers is a Gaeilgeoir, indeed he didn’t even speak English until he left Tourmakeady in Mayo to work in London in his late teens.

Daddy Chambers had no proper interest in the language growing up and it’s a regret of his.

I personally think Irish is not taught correctly in national schools. I don’t want learning Irish, and Irish culture to be a chore for Aidan and Sarah.

I’m also of the opinion that speaking two languages is only a good thing.

There’s also evidence that suggest that children who learn through the medium of Irish find it easier to learn additional languages, which is only a good thing in my mind.

So many friends have asked myself and Daddy Chambers if we’ll be able to handle helping the kids with homework if they do go on to the Gaelscoil.

I don’t think it’s going to be a problem. I was very good at Irish in school and although I wouldn’t be able to hold a full conversation as Gaeilge, I would be able to listen to one and understand 99 per cent of it.

Things like that are only a problem if you let them be. To be sure, I’ve enrolled
myself in a refresher course in Irish and we’ll all plough on from there.

Grandad Chambers is going to help too. He talks a lot of Irish to the kids when we visit, and although they don’t talk back to him as Gaeilge, they seem to understand almost every instruction he gives them.

It’s lovely to see and I know Grandad is very excited and proud that Aidan is off to the Naíonra. And so am I.

So from Thursday, Aidan, or should I say Aodhán, will have múinteoirí who only speak Irish to him; it’s known as the early immersion model.

He can answer and speak in English, naturally, and I can’t wait for his little Irish vocabulary to grow.

In January Sarah will join her big brother in Naíonra Bhóín Dé and I have no worries about her heading off either.

Indeed she’s quite mature for her age and would probably be ready to go now, but because she’s not three until December, Naíonra Bhóín Dé won’t take her for her first ECCE year until after Christmas.

Hopefully with Aidan coming home with the cúpla focal, she’ll pick it up and slot in seamlessly in the new year.

So from here on in I’m going to refer to Daddy Chambers as Daidi Mac Ambráis, Aidan as Aodhán ac Ambráis and herself as Sorcha Nic Ambráis! Ah, níl mé ach ag magadh; I’m only joking! Although those names have a lovely ring to them all the same.

I can’t wait to see how he gets on. I really hope he likes it.

I will let you know how it goes. Slán.