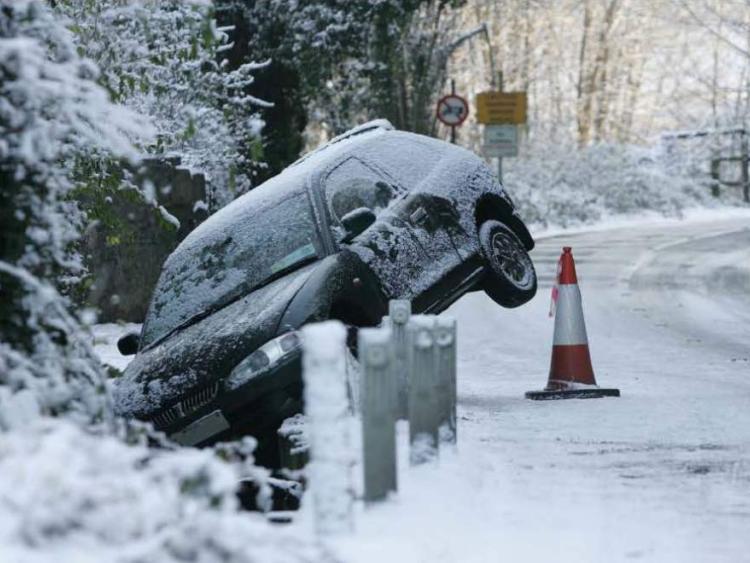 God, the Irish love the weather.

Or rather, we love it in our own particularly Irish way, full of grumbling admiration and jocular resentment, like a long-suffering spouse whose unwanted presence we can’t bear to be without. We loving talking about the weather, moaning about it, predicting its vacillations, damning its caprices, decrying its fickleness, cursing its relentlessness, eulogising its mysteries, and always, seeking someone to blame.

“Ye’d think the Government would do something about the feckin’ rain!” - “What are the schools doing staying open, they’re putting our children’s lives at risk!” - “Global warming, me arse, this was the best November yet, those green eejits don’t have a clue what they’re on about!”

Just last week we saw the Irish spirit of indomitability in the face of crisis, soaring like a mangy dove with a broken wing, as the first snowflakes of winter were viewed as the augur of an apocalyptic cyclone of biblical proportions sure to drag the country into a maelstrom of chaos and panicky Christmas shopping.

Our Facebook page was chock full of comments from aggrieved parents apoplectic at the schools for staying open, as though it were all some Herodian plot by Education Minister Richard Bruton to slaughter the nation’s children. And as for that shower in the county council, why, they’re as much good as a paper mache umbrella, why weren’t they out gritting my driveway first thing on Sunday morning, fecksake, the amount of taxes I’ve paid I should have my own personalised snow plow complete with uniformed driver ready to splutter into action at the first sign of frost!

Perhaps it’s the country’s agricultural history that so informs the modern meteorological mindset, that John B. Keane romanticism of the sons of the soil toiling through the storm-lashed muck and mire to reap a harvest of hard work and hump-backed fortitude. The rain doesn’t fall on this isle, it “lashes” down like the the slave driver’s whip, it “pelts” the populace like a punishment stoning, it “beats” and “drums” and “drenches to the bone”.

In ancient times our forefathers would make offerings to the gods in the hope of securing a good harvest. Nowadays it’s our sense of reason that gets sacrificed to the weather, perspective and proportional response butchered on the altar of hysteria.

Every Met Eireann weather warning is treated as a doomsday proclamation, every storm the first sulphurous belch of the approaching antichrist. When that tempestuous jezebel Ophelia arrived howling and shrieking recently the country went into lockdown and the people went into their nearest corner shop to snatch up all the tinned goods and loaves of bread they could carry before martial law was enforced. The sense of panic buying was almost as palpable as that usually reserved for Holy Thursday. It seems the only thing the Irish fear more than getting sucked up into a hurricane is not being able to sup down a pint on Good Friday.

We don’t even trust the odd splash of good weather that graces these shores. If the sun starts shining before July we greet it with the sort of suspicious welcome usually reserved for far distant relatives who turn up on the doorstep unannounced. “That’s the summer now,” we sigh defeatedly, slathering on the suntan lotion to soak up those precious rays before the sky returns to its normal ash-grey pallor and the perpetual drizzle.

But physician, heal thyself. Those of us in the media perhaps have to shoulder some of the blame in disseminating doom and gloom to a bad news-hungry readership. With a liberal sprinkling of such popular journalistic caveats as ‘could’, ‘may’, ‘possibly’, and the ever-applicable ‘it has been reported’, we can sex up the weather to create a tsunami in a teacup just in time for your coffee-break cuppa.

One of the more popular videos on the Leinster Express website in recent months was a 40-second clip of a particularly heavy downpour. People were actually logging on in their droves to watch the rain falling on Portlaoise Main Street. While the older generation still enjoy the timeless pleasure of pontificating about precipitation by the fireplace, today’s tech-savvy content consumers seem to favour a digital deluge to the real thing. Clearly, even the weather isn’t real unless you saw it on Facebook.

So I’ve hit upon a surefire money-making idea: a DVD of the best bad weather of the year. It’ll be 60 minutes of drizzle turning fields around the country to slush while sturdy old men with full heads of white hair and no arses in their jeans lean over gates clucking their tongues and muttering “fierce altogether”, while stout old women wrinkle their lips mumbling “never seen the like of it” as they rub their rosary beads and pray to St Anthony to spare them from the heavens’ wrath.

It would make a great Christmas present for your granny, who, let’s face it, probably isn’t on Facebook and so has no way of knowing what the weather’s like unless she goes outside, and Jayzus, ye couldn’t let a woman of her age go out in that weather, sure the rain would lash the skin off her back if the hailstones big as sliotars don’t beat her to the ground first or the galeforce winds blow her away altogether, I swear, if that bunch of clowns in the Dáil were any bloody good they’d have done something about it years ago, I mean, what do we pay our taxes for anyway?