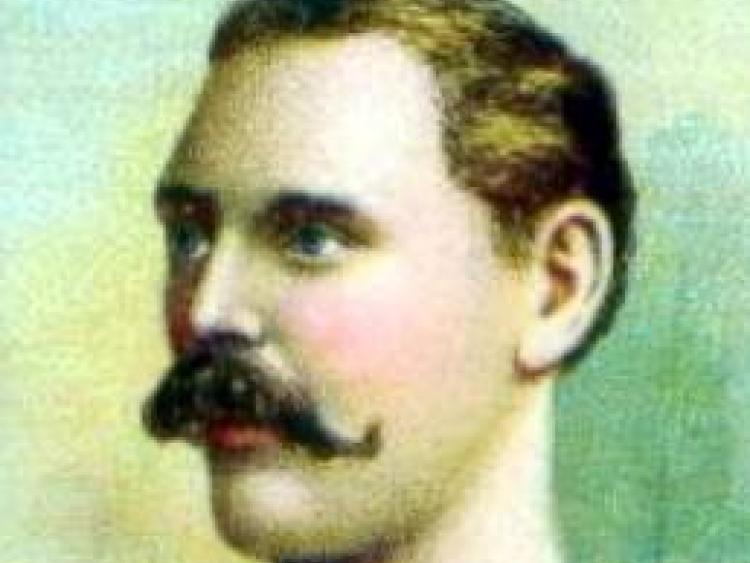 Did you know that County Laois produced a world champion handballer? Phil Casey, who was born at Shannon Street, Mountrath, in 1841 has that coveted distinction. He was a man of mighty physique, standing six feet tall and of great agility.

Casey’s father died in 1856 and a few years later the family upped stakes for America and made their new home in New York. Phil had distinguished himself as an athlete in Ireland and was particularly good at handball. He blazed a trail for himself in his chosen sport in the USA and, beating all-comers, he earned a crack at the national championship.

He won the American title by beating the holder, Bernard McQuade, and then, in 1887, defeated the Irish and reigning world champion, John Lawlor, to claim the title for himself.

It the post-Famine era Ireland produced a breed of sporting giants who dominated the world athletic scene especially in events where strength, stamina and agility were required, such as weight-throwing, boxing and, indeed, handball. The Olympic Games were revived in 1996 and many of the early athletic champions were Irish born or of Irish descent. But their medals are attributed to other countries, especially the UK and the USA, whom they represented prior to Irish independence.

The Irish exported the game of handball to America where it became very popular and, although it never made it on the Olympic stage, it was very competitive and often played for high stakes. Casey was to the fore in popularising the sport in New York and around the North American continent and the big events created great excitement, attracting huge crowds and receiving a lot of coverage in the press.

When Casey became the American titleholder he challenged the legendary Irish ace, John Lawlor, for the world champion crown. A purse of $1,000 was put up for the winner, a huge amount of money in those days. It was a twenty one game two stage event with the first clash in Lawlor’s home court in Cork in August 1887. Lawlor won by seven games to three. But it was a different story when Casey took on his rival at his own base in Brooklyn in November winning the eight games needed without losing one to his opponent.

There were great turnouts at both events and the majority of those who turned up could not gain admittance. They remained outside and were kept in touch with proceedings by runners bringing them the news in a welter of excitement at the end of each game.

The Mountrath man built the first purpose built handball four-walled court in America at 297 Degraw Street in Brooklyn which became a mecca for the sport in the following years. The site is now an apartment block. He continued to win major events and accumulated considerable wealth, building many more courts in different parts of the USA from the proceeds.

Phil was son of Patrick and Bridget Casey. His brother, James, was equally famous as an all-round athlete, being 6 foot 3 inches tall, and both excelled at high-jumping, long jumping and slinging the 16lb hammer.

They were educated at the Patrician Brothers schools, Mountrath, where they were very adept to learning under the guidance of the Rev. Bro. John Delaney. Phil developed his handball skills playing against a “blind” wall in Shannon Street and also at the ball alley at the school. As a youth he played in competitions in all the principal handball courts in Ireland and showed great potential.

But family fortunes quickly changed with the death of his father when he was still in his mid-teens. After struggling to survive for some years the family consisting of his mother, brother and three sisters took the emigrant ship to the new world. James joined the Brooklyn Police Force while Phil became friends with James Dunne, who at the time was prominent in business and political circles in New York and who afterwards became his playing partner and life-long friend.

Phil and his friend and partner, James Dunne, made a successful team. They went to Chicago and won the doubles championship and held the honour for many years. In 1897 they defeated a formidable Irish duo Carney and Keegan for the crown and a side bet of $2,000.

Casey, who is credited with training the famous world champion heavyweight boxer, John L. Sullivan, for his title fight with James J. Corbett, was a regular visitor to Ireland and played a number of exhibition games in this country including in Dublin and Cork. He was known as a generous man and contributed to many causes including the building of his local church in Mountrath.

Phil Casey was a man who lived modestly and kept fit and in good health all his active life. But he suffered a physical breakdown which puzzled his many friends and acquaintances a few years after retiring from the sport. This proved to be a cancer attack and he passed away in 1904. He is buried at Holy Cross Cemetery, Brooklyn, alongside his mother and other family members.

Details on Casey’s family background and achievements can be found in that wonderful information resource of the National Folklore Collection obtained from schools throughout the country in 1938. The collection is in the safe-keeping of UCD and much of what it contains is now accessible on-line.

Casey’s story was related by a cousin of his, Thomas McCarthy, Bridge Street, Mountrath, on 3 February 1936 to his teacher, Bro. Columban Cronin, The Monastery, Mountrath (Vol. 833, pages 304 to 306, Roll No. 14243). Other information for this story was borrowed from an article in the Leinster Express of 18 August 1984 as well as some handball websites online.

What a pity though that a personality of such dimension in international achievement terms is largely forgotten in his native county today and he does not even make it on the relatively short list of notable personalities mention on the Wikipedia website for Mountrath!