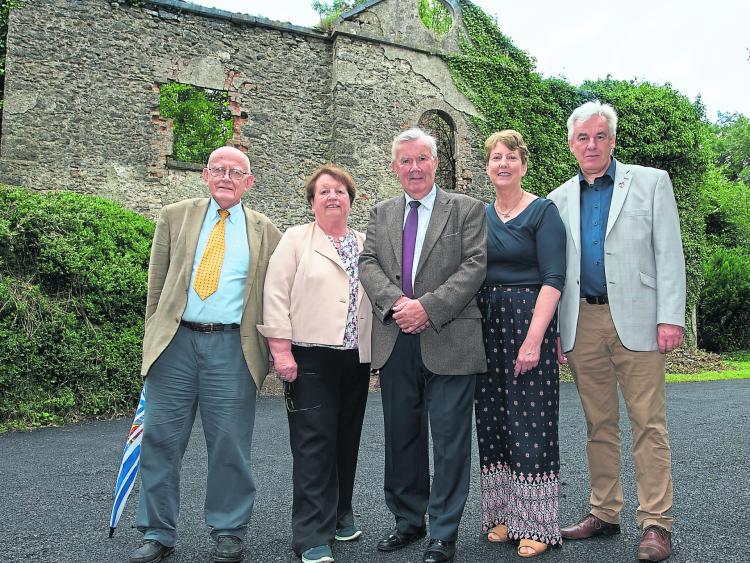 The ancestral homes of the Lalor family at Tenakill, Raheen, Mountrath has undergone the first phase of its of its conservation and ultimate restoration.

The house was the home of Honest Pat Lalor MP, his sons, James Fintan, Richard MP and Peter, leader of the gold miners at the Eureka Stockade uprising which ultimately led to the “independence” of Australia. The work, which commenced on October 9, was a timely intervention and it was completed much just before Hurricane Ophelia struck the country with devastating consequences including the loss of three lives and the destruction of property.

Circa 1770 Tenakill House, as it is spelled by the Lalor family who resided there, was constructed, and it saw the emergence of a family, already steeped in history, and witnessed the birth of new members of the family who reached new heights of political involvement in the events of Ireland, Australia, America and Spain. But sin sceal eile.

But it was thanks to a committee, which was established earlier this year, a grant from Laois County Council, under the “Structures At Risk” designation and matching funding from a private source, that urgent remedial work commenced on Tenakill House, on Monday, October 9, 2017, a week prior to the advent of Hurricane Ophelia.

The committee had retained Richard McLoughlin, a Conservation Architect and Austin Dennany, a Construction Engineer, who had carried out surveys of the house and came up with a programme to secure the structure.
They recommended Smith Demolition Limited, Demolition and Environmental Contractors from Newcastle West, Co. Limerick for the work and it was a week prior to the advent of Hurricane Ophelia that they moved onto the site.

The ivy was cut at the base of the walls, higher up on the walls the ivy growth was trimmed back to the rendering, trees growing inside the structure were cut as were overhanging boughs.
Portions of the walls over the windows and the window lintels had deteriorated and the structure at these locations was in a perilous state.
The windows were stressed with timbers and made safe and Thomas Fleming announced that the house was now structurally safe and secure.

It was welcome news to the committee who had been on site for the duration of the work and were impressed by the knowledge and efficiency of the team from the company. Two previous efforts had been made to restore the house but they came to nought and with the passage of time, the vacating of the house by Richard Lalor-Fitzpatrick, saw it gradually fall into dereliction.
At the time of his marriage Richard was faced with the dilemma of repairing Tenakill House.

However, when he went into the logistics of the situation he found that the cost of repairing the Tenakill House was four times the cost of building a new house. It was a no brainer. The new house was built.
When the Tenakill Lalor House Committee was established representations were made to Laois County Council and meetings were set up.

The then Chairman of Laois County Council, Cllr. Tom Mulhall visited the house on a number occasions and was accompanied by CEO of the Council John Mulholland. The history of the Lalors of Tenakill House is remarkable in that their antecedents were removed from their ancestral territory in Laois and were one of the Seven Septs of Laois who were transported to Tarbert, Co. Kerry. The descendants of those transplanted returned later to Laois and succeeded in leasing lands in the Raheen area and it is from those who returned that the remarkable Lalors of Tenakill emerged.

Four members of that family, Honest Pat Lalor, MP, his sons, James Fintan, Richard, MP and Peter, of Eureka Stockade fame, made an impact on the history of Ireland and Australia.
Earlier Lalors from the same family emigrated to Spain and became generals in the Spanish army and one a mayor of Madrid, while another rose to one of the highest ranks in the British Revenue system.

Other sons of Honest Pat went to America where one of them became a famous doctor and another a general in the American army. Hurricane Ophelia having passed, Kevin and Mary Lalor-Fitzpatrick, the current owners of the house were delighted to see no structural damage had been inflicted on the structure.

“Smiths company did a marvellous job”, commented Kevin as he viewed the house the morning after the hurricane.
“Nothing moved and we were listening to reports on the radio and television of devastation from all over the county. “They did a marvellous job,” added Kevin.Richard McLoughlin, the Conservation Architect, will now carry out an intimate survey of the building so as to formulate a detailed conservation/restoration programme for Tenakill House.

This survey has been funded by a grant from the National Heritage Council which is chaired by Laoisman, Michael Parsons.
“We are currently putting in place a drive to raise funds for the ultimate restoration of the house which, when restored, will prove to be a major tourist attraction for the area and will be a great addition to the Ancient Ireland East tourism drive”, added Kevin.