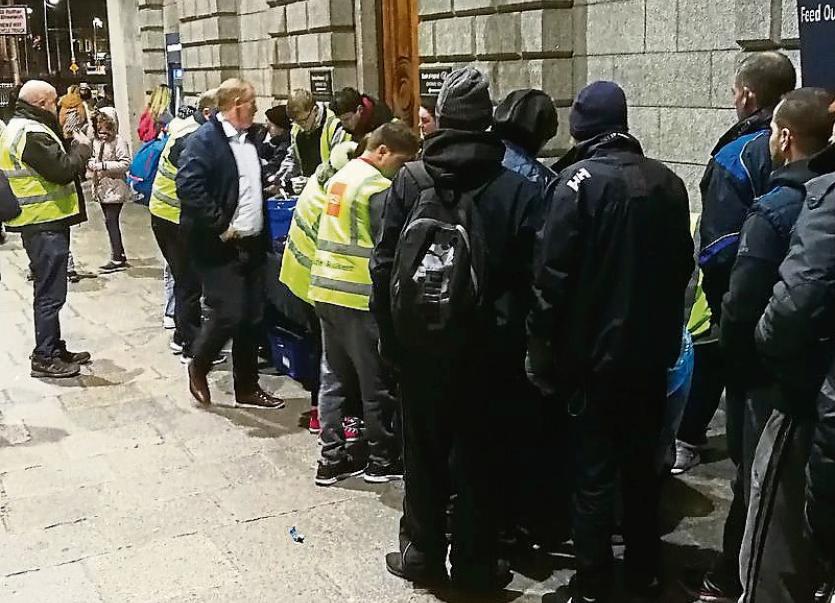 Over the past seven months Laois ambassador for Feed Our Homeless Tom Duffy has made many trips to Dublin with car loads of warm clothing, sleeping bags and food supplies donated by the people of Laois.

The realities of homelessness on the capital’s streets are truly shocking and devastating. Many harrowing sights and devastating stories were witnessed by Mr Duffy recently at Feed Our Homeless’ soup run on Westmorland Street and on the voluntary group’s outreach services around the city streets.

Some of the stories encountered are almost unbelieveable.

A husband and wife in their 60s along with their son in his 30s left Hungary in search of a better life in Ireland almost two years ago. The mother is in a wheelchair and suffers with diabetes, mental health issues and is awaiting an operation on her leg.

The family walk the streets of Dublin every single day from 8am until they can phone the emergency freephone number seeking beds for the night which doesn’t opens until 10.30pm.

Sometimes beds are not available and they must sleep outside, other times the family are separated into different hostels. They feel extremely lucky on the rare occasions they are kept together. The husband has to give his wife four injections per day for her diabetes as people pass by on the streets of Dublin.

Walking the streets for almost 15 hours per day seven days per week is the daily norm for homeless people as they are put out of the hostels by 8am each morning and can’t return until they have been allocated a bed again that night, if there are any available.

Tom Duffy explains how the soup run and outreach services work to help such families.

“Firstly, the homeless situation is at crisis levels. Between 200 and 300 homeless people are fed and clothed every Thursday and Sunday night outside the old Bank of Ireland opposite Trinity College Dublin.

“The founder of Feed Our Homeless Tony Walsh along with his volunteers begins setting up food tables at 7pm. A variety of hot meals and hot drinks are served to homeless people along with sandwiches, cakes, doughnuts, biscuits, crisps, chocolate, fizzy drinks, pizzas and fruit. People could still be queuing to eat at 9.30pm.

“All the clothing that Laois people donate to us at my home in Glenbarrow in Portlaoise will be usually gone before 10pm. We re-bag the clothing and label what’s in each bag before taking as much as we can on each trip. Everything goes from my house directly to those who need it on the streets.

“Hundreds of people look for coats, fleeces, jumpers, hats, scarves, gloves, socks, jeans, jog-pants and nothing is wasted. The queues are enormous and it’s heartbreaking to see the poverty first-hand. It doesn’t really affect you until you are actually there feeding and clothing these poor people.

“We then go on outreach walking around the streets looking for homeless people in shop doorways making sure they’re warm and have food, clothing and hot drinks. Many sleeping bags are distributed to the homeless people through Grace Dooley’s Go-fund-Me Sleeping Bag Project.

“We met a lovely man called Danny who lives with his brother in an old garage on wasteland which has just been sold. They sleep in a tent inside the dilapidated garage with only a small gas heater to keep them warm.

“They are waiting for the bulldozers to come. He told us that the last time they used an emergency hostel over a year ago that a drug user leaned over his brother’s bed to inject himself. He burst a vein and blood went all over his brother’s bed. He videoed this happening, took it down to the staff and showed them. Their reply was that they would put his name in the sin bin. You would need a heart of stone not to shed a tear on the way home,” said Tom.

Tony Walsh is the founder of Feed Our Homeless.

“Feed Our Homeless have real concerns for the lives of rough sleepers on the streets around the Capital. The feedback that our outreach team are getting from the rough sleepers is that they won’t avail of the services because the services are unsafe.

“There are way too many rough sleepers on the streets and we are afraid of another death happening. During the bad weather recently there were people sleeping in shop doorways on a blanket of snow. We were blessed that we came out of the Beast from the East without any homeless deaths.

“Many rough sleepers don’t have drug or alcohol issues and I know several who get up in the morning from a shop doorway, go to work and return to that shop doorway that evening. They are simply priced out of the rental market”.

He wants the Dublin Region Homeless Executive, Dublin City Council and the State to put an urgent action plan and intervention in place to make the emergency hostels safe for rough sleepers to stay in at night rather than them being forced to sleep rough on the streets due to fear for their safety.

“The one night bed plan isn’t working. People need six month beds to have any chance whatsoever of being able to exit homelessness. You can’t come out of homelessness without the proper key-workers and being linked into the necessary services. It’s just not possible to be able to move forward with your life. In order to get social welfare payments it’s necessary to have an address, how do these people stand a chance, most beg to survive.

“We need a spacious dry hostel with immediate effect where it’s safe for people without addictions to sleep and to have a place to shelter out of the rain and call home temporarily. People from every county in Ireland and many people from European countries are filling the shop doorways every night. They all echo and highlight the same issues, that the state funded emergency services are not safe for them to stay in.

“Other rough sleepers are in recovery from addictions. These rough sleepers won’t use the state funded emergency services at night because there is a real fear that they will either relapse in their recovery or they will develop a drug addiction when staying in the emergency hostels due to open drug taking.

“Rough sleepers explained to our outreach team that open drug use is rife and they constantly get robbed of the little that they have in some of the emergency hostels. Many went on to tell our team they would rather sleep rough and take their chances on the streets.

“This is simply not good enough in Ireland 2018. A complete overhaul of the system needs to be addressed as a matter of urgency. To put it simply, homeless people are being forced to sleep rough on the streets at night simply because the state funded emergency hostels are not safe for homeless people without addictions or in recovery to stay in.” he said.

Tony Walsh wishes to extend his thanks to the people of Laois who continually support Feed Our Homeless expressing that its work could not be carried out without the help of the people.