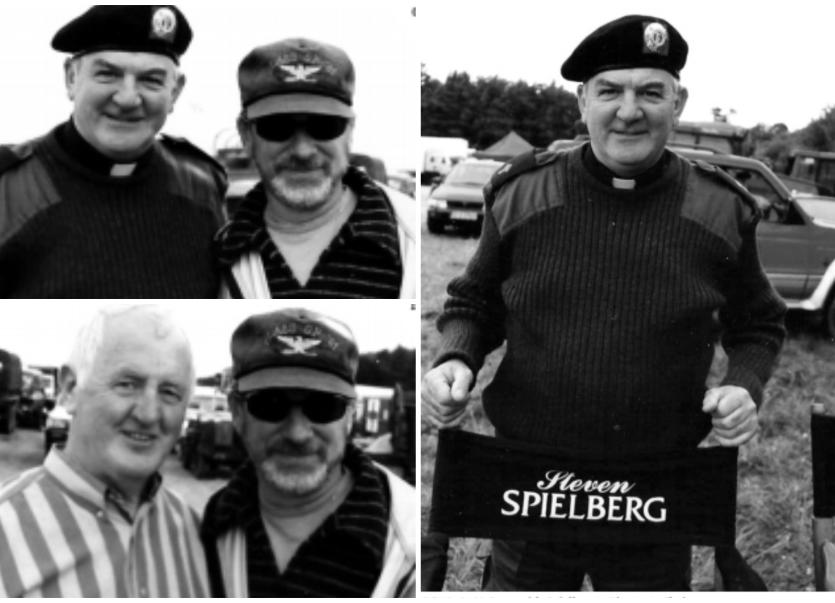 A Mountmellick born priest has recalled the day he spent with Oscar winning director Steven Spielberg, even eating breakfast with Spielberg and Tom Hanks.

The director of ET, Schindler’s List, Jaws and 1990s blockbuster Jurassic Park, was in Ireland to film Saving Private Ryan.

On the back of the huge box office success of Jurassic Park in the mid-1990s, Spielberg found himself on Curracloe Beach in Wexford, filming for the World War II epic drama, Saving Private Ryan, a film released 20 years ago this year.

The film’s stars, including Tom Hanks and Tom Sizemore, descended on the southeast coast to film the Normandy Beach scenes for the award-winning movie.

At that time, Edenderry’s popular Parish Priest, Fr PJ McEvoy, who hails from Mountmellick in Laois, was serving as an army chaplain in the Curragh, Co. Kildare.

“I arrived in the Curragh to serve as a chaplain with the Defence Forces in September 1995,” Fr McEvoy explained.

“The reason I remember so clearly is because two weeks before I arrived, filming for ‘Braveheart’ starring Mel Gibson had finished up near the Curragh, and I was sorely disappointed that I had missed the chance to see the set.”

However, it wasn’t too long before he would have his chance to grace the set of a major Hollywood production.
“I was at a wedding in August 1997 and I missed a phone call from the Curragh. The message I read afterwards said Steven Spielberg needed an army chaplain on Curracloe Beach the next morning. Once I read this, I thought, I am not going to miss out this time,” Fr McEvoy recounted.

He rang headquarters in Dublin and was informed that they were now looking for a chaplain in Dublin, before Fr McEvoy told them “to look no more,” because he was on his way. He set off after the wedding in Portlaoise and arrived in Wexford, where the FCA and Defence Forces were camped, having been drafted in to film the extraordinary D-Day scenes for Saving Private Ryan.

“I met the sergeant who had made the phone call and he told me what was going to happen and that I was going to stay the night there at St. Peter’s College where the Defence Forces were camped.” The next morning, Fr McEvoy arrived to a location near Curracloe Beach at a thistle field where important scenes were to be shot.

“They had been cultivating this field especially for the production over the course of a year and at this time it was in full bloom of the most beautiful purple thistles,” Fr McEvoy remembered. “An army colonel introduced me to two of the stars, Tom Hanks and Tom Sizemore. Hanks said ‘you’re very welcome your reverence,’ and once I admitted that I didn’t really know what I was needed for that day, he said that the boss would be here soon,” Fr McEvoy recalled.

“I was looking around at the crew setting up and then a silence descended over the place just as Spielberg walked through the gate. He approached the colonel and asked had his chaplain arrived, and so the colonel introduced me,” Fr McEvoy stated.

Spielberg introduced himself, talked to other crew members, and then said, “I just want to have a word with PJ.” The director put his hand on Fr McEvoy’s shoulder and invited him to go for a quick walk, telling the crew he would be back in a few minutes.

Fr McEvoy shared his memo- ries of that surreal walk: “It was just the pair of us, and we went up through the purple thistlefield, all around the headland, where he told me why he wanted me on set that day. He said ‘when we made Schindler’s List, we prayed before filming for those who lost their lives in the Holocaust, and here we are talking about D-Day, a moment in history where 44,000 Americans died. I want to mark the fact that this was a truly disastrous day, and I want you to
perform a prayer service and a blessing for the crew working with us.’ I said no problem and after he had given me a few pointers, we headed back to perform the service.”

“In a way I felt like saying, so I’m not going to be in the film,” Fr McEvoy joked. Spielberg gathered his crew and they all stood around Fr McEvoy who prayed for the soldiers who died fighting on the Normandy Beaches in 1944.

“After I had said the prayers and wished them all well with their work, I noticed the biggest black cloud I’d ever seen coming in over us,” Fr McEvoy said.

“I finished up and the heavens opened with huge drops of rain," to which Fr McEvoy proclaimed, “Welcome to the sunny southeast.” Following the service, the crew went for breakfast, and Fr McEvoy says, “Myself, Steven Spielberg and Tom Hanks had breakfast together.”

“Just before we finished, Spielberg asked me if I would like to hang around as the filming took place that day, and I said I would absolutely love to.” Perhaps the most amazing part of that day for Fr McEvoy was the fact that Spielberg said, “if you would really like to see how it all works, stand behind me at all times.”

Fr McEvoy was thrilled and spent the next three hours shadowing the world’s most acclaimed directing talent. “It was absolutely fascinating to watch a scene being shot, analysed in fine detail, and reshot numerous times until they had it right, especially now that I know the 20-second scene I saw in the film took almost a full day to shoot,” Fr McEvoy commented.

“Just before I was due to leave that first day, Spielberg told me they were doing the beach filming the following week if I wanted to come down, and I told him I’d love that.” Fr McEvoy asked if he could bring someone with him, and after Spielberg said “of course,” he decided to ask his good friend, the late Vin Kelly of Gilroy Avenue, Edenderry, to join him on the set.

Vin was delighted to be asked and the friends arrived about two weeks later to watch the crew film a scene showing the aftermath of a bridge ambush, something Fr McEvoy recalls as being “extremely realistic.”

“On that day, they had big signs up around the set saying no cameras, no videos, and no autographs. However, we had our cameras in our pockets just in case, but we thought that because we were getting on so well with everybody, we wouldn’t take them out, and so said goodbye to everyone.”

As Fr McEvoy and Vin walked away toward the carpark, they noticed a line-up of luxury trailers used to house the cast and crew during filming. “As we drove out we spotted Spielberg walking toward his trailer and I decided that I would ask him for a photograph. He eagerly agreed and reached to take the camera to capture a photograph of Fr McEvoy and Vin, before they decided to correct him.

“We told him we meant a photograph with him, but all these years later I think how special it would be to have a photograph of myself and Vin taken by none other than the world’s most successful film director. I missed out,” Fr McEvoy lamented fondly.

“As it turned out, it was terrific because we then bumped into Tom Hanks as well, and I’m delighted that Vin loved the whole experience as well. It was a brilliant day,” he added.

The film went on to earn Steven Spielberg his second ‘Best Director’ Oscar, with the production winning five Oscars in total. Having been there during some of the filming, Fr McEvoy says the Oscars were more than well deserved, and maintains that he will never forget “his remarkable experience” on the set of one of the biggest movies of all time with Steven Spielberg.