Mountmellick, the small town with the big heart in Laois 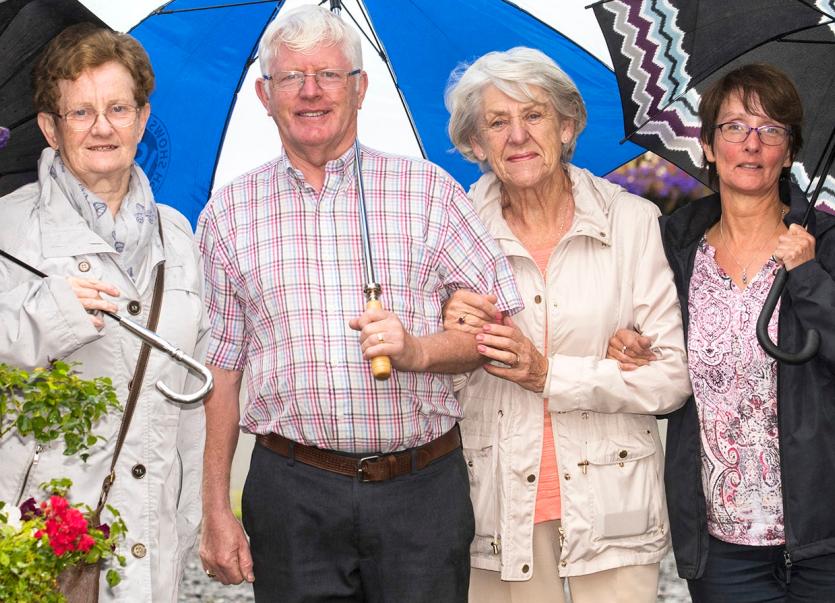 OUR LAOIS: The Leinster Express is embarking on a tour of Laois towns and villages starting with Mountmellick. Fuelled by local pride, the town has a vibrant community spirit. Pictures: Kevin Byrne

They say it takes a disaster to pull a community together, and while Mountmellick has recovered from the flood of November 22, 2017, the third largest Laois town already had a strong vibrant community spirit.

The first evidence for a visitor is the colourful, woolly bunting decorating the Mountmellick signs on all five approach roads.

Every year before Electric Picnic, the award-winning Yarn Bombing Mountmellick craft group delights with a surprise ‘bombing’ of railings, bicycles and trees. They put in months of planning and hard work, to put their town on the map in a positive way for a few weeks.

Its founder is Nina Horan. “It’s about bringing colour to the town, celebrating our strong history of textiles, and putting a smile on people’s faces,” she said.

Mountmellick to fly flag for Laois in Enterprise Town competition

Entering the town from Portlaoise, the next iconic sign of community spirit is the restored mill, home to several businesses and services including a restaurant and a museum.

It is run by Mountmellick Development Association, who bought it in an auction in Lewis’s pub in 1989, using money raised locally for years in the Splash of Cash lotto.

Paul Dempsey is the chairman of the board of the MDA. “The Splash of Cash raised £100,000, massive money back then, mainly thanks to our ticket seller Michael Lawlor,” he told us.

There were trees growing inside the derelict riverside mill.

“We knew the structure was good. We knocked two stories, and opened it in 1994 with a Rehab restaurant. At one stage we had 240 jobs here. Now there are about 110,” Paul said.

“We get groups from around the world coming for workshops, particularly Australia and New Zealand and our teachers Dolores Dempsey and Ann O'Brien have gone out there to teach,” he said.

The MDA will soon open a Digital Hub, offering 30 desks and high- speed broadband to businesses.
“We can design it for open plan use or individual pods — there is good interest in it already,” Paul said.

To the rear, they built two units to order to lease to the Standex factory and the HSE, which in turn helps to fund the centre and maintain local jobs.

The MDA is a community meeting place too, for groups like Mountmellick Camera Club, the IFA, the Active Retirement group’s dance sessions, and Grow mental health meetings.

“We are here to serve the community and generate employment. Once we cover our costs of caretaking, we can keep going,” Paul said. 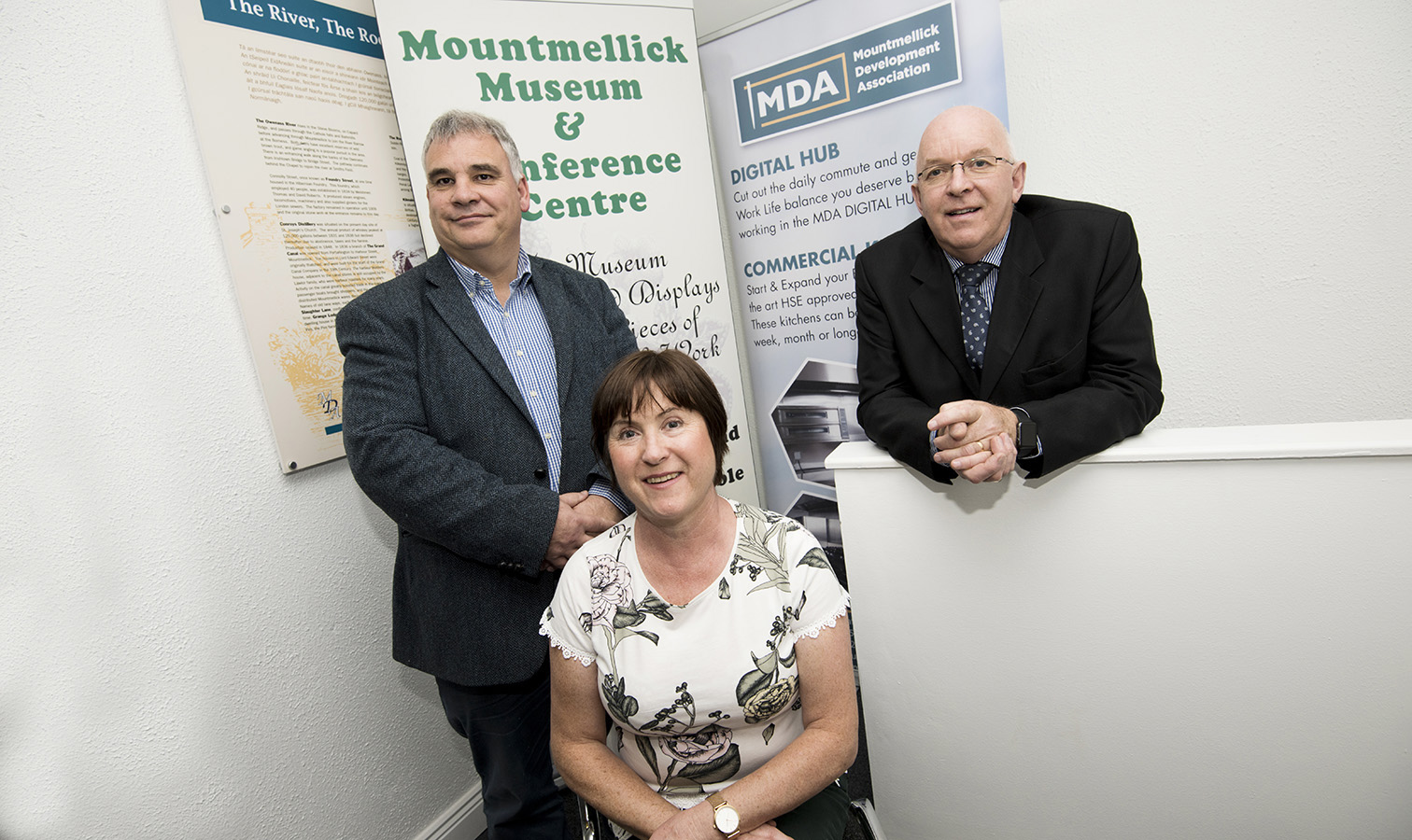 In late August the venue hosted the first visit to Mountmellick by Sinn Féin leader Mary Lou McDonald, who accepted a piece of Mountmellick Work commissioned by the local Cumann and listened to local issues concerning the community.

In the audience was Maura Reddin from Mountmellick Tidy Towns committee. Their group of nine volunteers works to keep the town clean and bedecked with flowers.

In the last two years they have seen a boost in supporters by using social media to ask for helpers.

“We got extra volunteers this year by asking for help on facebook. In Irishtown we have a new group looking after that area now. Macra and scouts again came onstream to help us this year, and the Community Employment lads took on the watering of flowers which was a huge asset to us,” Maura said.

The group enlisted local artists to paint murals on empty buildings, and this year added a community garden on the Portlaoise road. There are now apple trees growing in the picnic area in Derryguile, which locals are welcome to harvest.

“We got a great response to that,” Maura enthused. “The people of Mountmellick are very good but we can always do with more manpower! There are about nine of us but many are aged 60 or 70 plus.”

On the same evening, it was movie time in another landmark building, also restored and revitalised for community use.

It is home to the Men’s Shed, Mountmellick Drama Society, the Sunday evening parish bingo, and regular plays, concerts and dancing school performances in the 470-seat theatre.

Upstairs is the cosy restored Balcony Cinema, where a €5 admission fee includes tea and treats. On the night the largely female customers included Noreen Molloy and Nuala Kinch, who come nearly every week.

“The atmosphere is great — where would you get it for a fiver?” asked Noreen.

Therese Lawlor and her mother Mary were first-time customers. “It’s probably years since I was at the cinema. It’s handy, it’s near at hand and I don’t go to pubs, so for the money it’s worth it. I’ll come again,” said Mary.

Ger Lynch and Michael Feeley opened the Balcony Cinema in 2013, as a community non-profit project.

“It’s sustainable as much as we hoped for. Mountmellick has a history of showing films since 1918, and we are happy to keep that going. Mick does the teas and my daughter Aoife shows the films. We get lots of back-up from the CE scheme, in maintaining and cleaning the centre. Without that help it wouldn’t be possible to keep it going,” Ger told the Leinster.

Mick Feely and Ger Lynch of the Balcony Cinema 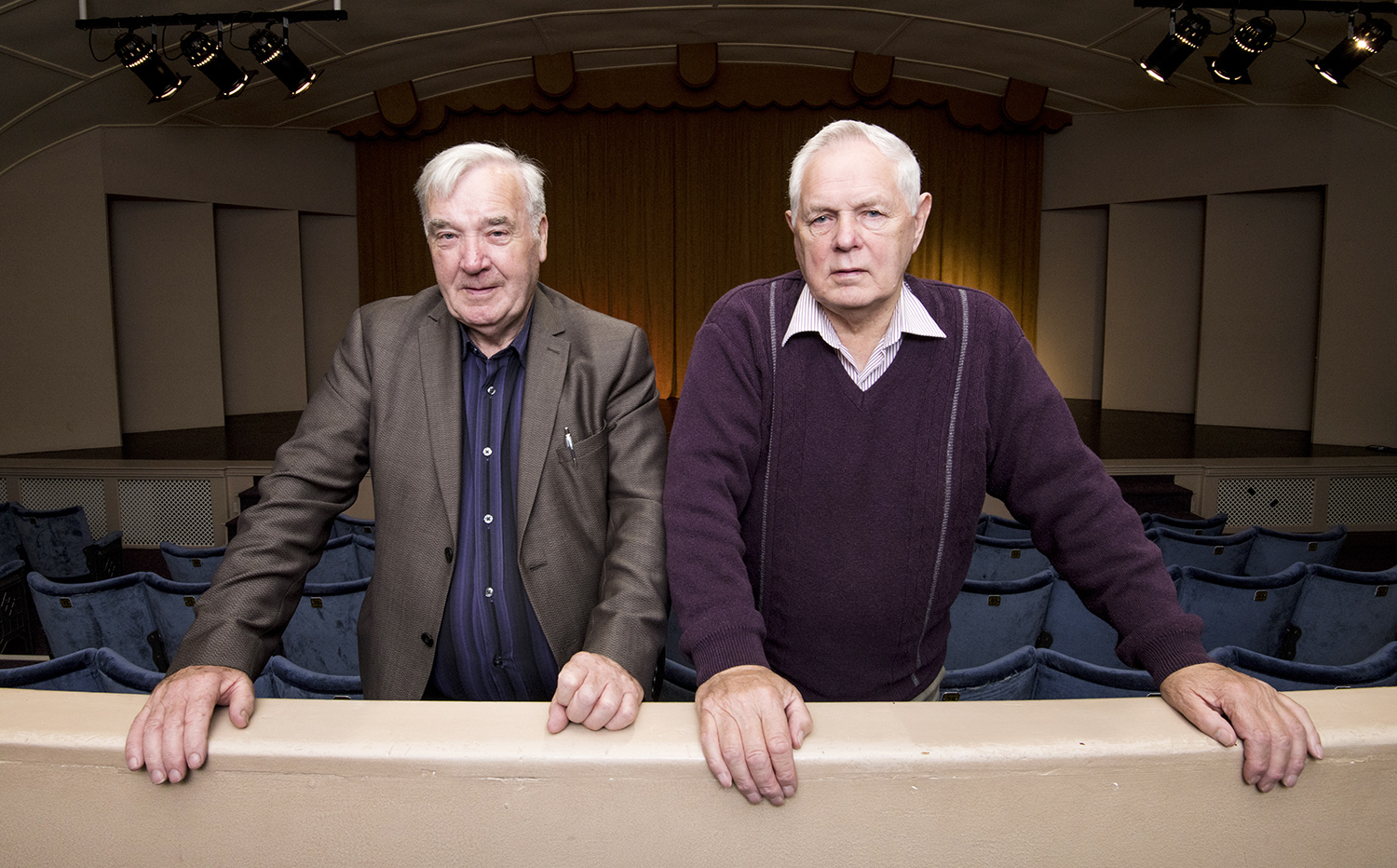 They were advised by a customer to show films that women would enjoy (that advice worked), as well as offering the free cuppa.

“The tea really turned it around. Our numbers are picking up steadily all summer. It’s part of the social life of the town now,” Ger said. They began offering a free bus to the cinema this year, and it resumes for autumn shortly.

“We will be sending the timetable of 11 stops to every house so all can avail of it in the bad weather. We expect our numbers to increase in winter. It’s fully heated and very comfortable,” he added.

The main hall is in line for a massive renovation, if a grant application is successful. “If we get this major refurbishment it will be one of the best venues in the midlands,” Ger Lynch said.

The arts centre is helping to attract arts audiences from neighbouring towns.

“We are nestled between Portlaoise, Tullamore and Portarlington, three major rail centres. In one way that is not good for business here, but for the social scene it is good. It is important that we draw tourism and become a social centre.”

The town’s community network is also seen in the busy use of at least six halls for clubs and committees, from kickboxing in the Town Hall to zumba and badminton in the Macra hall. The Bay Road business park is the base of the rapidly expanding Mountmellick Gymnastics Club with 300 members.

Visitors can learn about the Quaker and industrial history of Mountmellick from signage boards all around the town, which is graced with a fine Georgian square, the home of the town’s famed Christmas tree and fair.

A walkabout also reveals the town’s religious diversity, with four different churches — Catholic, Church of Ireland, Methodist and Presbyterian, as well as a Mason meeting hall and a Quaker hall.
The Presbyterian church is now the Forum Hostel for visitors and tourists.

A stroll down O’Moore Street reveals the town hall, now a modern library and gallery.  Minutes further out, one comes upon the perfectly preserved train station, closed since 1963, now owned privately.

Mountmellick cares for its young and old, with seniors provided for in a thriving St Vincent's Hospital, while over €300,000 has been donated locally for a home for sick children to the Ben & Jake Connolly Trust, now almost completed.