Laois Life: Not goodbye but see you soon for Nuala Kelly at Laois School of Music 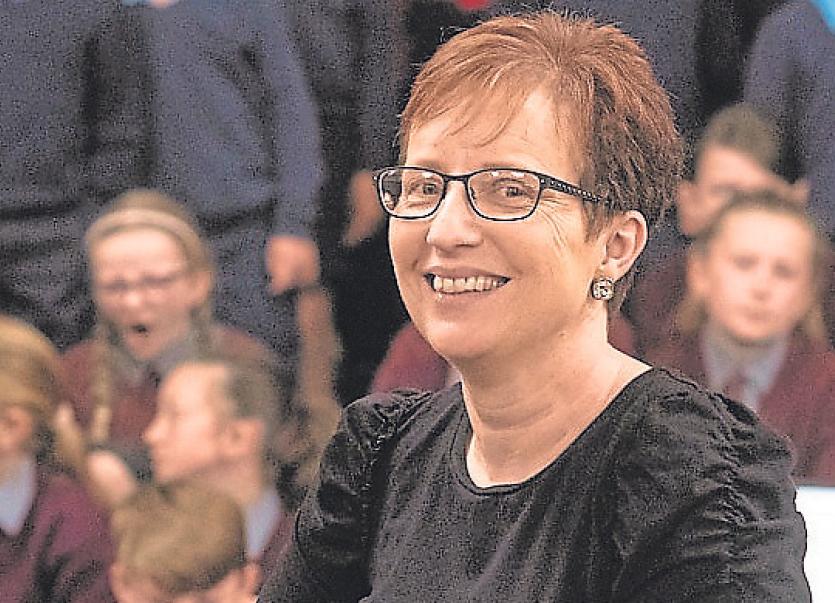 It is the end of an era for the Laois School of Music as former coordinator, Nuala Kelly, has taken a career break from the role after 16 years.

Nuala moved to Portlaoise in 2002 and began working at Laois School of Music straight away.

A number of things have led to the Carlow native’s decision to take a career break, illness two years ago gave her a new perspective on life and Nuala intends to exchange the administrative position of coordinator to explore her passion for singing and teaching more.

Full line up of free events in Laois for Culture Night 2018.

Her decision to take a career break coincides with the Laois School of Music and Music Generation Laois securing its own premises. Nuala said this is something she has worked towards.

The Laois School of Music and Music Generation Laois are now based at the former Scoil Mhuire, Church Avenue, Portlaoise under one name of Laois Music Centre.

“I want to do more singing and performing, I missed the creative side. Over 16 years it was a main aim to get a premises especially since 2010/2011 with the introduction of Music Generation Laois things had grown and expanded. I am sad to leave but I wanted to try something new.

“We were waiting a long time for the new premises and pushing for it, my own children were in that school and I never thought of it. Myself and Rose Flannery who is the Coordinator of Music Generation Laois, we looked at each other and said this would be perfect. It is going to be full every evening, we have 600 pupils on a weekly bases,” she explained.

Nuala is now focusing on her work as a singing tutor in a number of Laois schools while upskilling with a part-time distance course in early years music in Birmingham. Nuala took some unexpected time out of the office two years ago due to breast cancer. She said this contributed to giving her the push to take a break.

“I am back in flying form now, it wasn’t a very pleasant experience, maybe it influenced my decision in some way. You gain a different perspective when you go through something like that. Maybe that gave me the gumption to go for a career break.

“All is well now, I am out the other end, I have a different perspective on life maybe that is why I want to focus on creativity, I have a lot more to give. I am happy to watch the progress of the school and dip in and out of it as a tutor,” she said.

Looking back on her years as coordinator, Nuala has some fantastic memories to take away.

“I have met so many people, parents and pupils, I never forget a name. There are so many notable achievements, in 2006 the RTÉ National Symphony Orchestra came to Laois for a week and it was the best working week of my life.

“Getting Music Generation into the county in 2011, I would have spearheaded that which brought a great standard of musicianship. They are a great team of tutors and it is only for the support of parents on a local level that we are still here and I am delighted to have led that,” she said.

Nuala thanked the ‘great crew’ in the Laois Arts Office who she shared her 16 year journey as coordinator alongside.

Taking over Nuala’s role as coordinator is Jason Ritchie. Originally from Dublin, living in Laois for 12 years, Jason has a strong musical background with his band Late City Edition where he is a singer/songwriter and musician.
He played Donald Trump in Portlaoise Musical Society’s Panto back in January. He has worked in Payroll both commuting to

Dublin and more recently within Laois County Council before getting the job at the Laois School of Music..
Jason was delighted to take on the role and he has already led the rebranding of Laois Music Centre with a focus on social media.

“It is a great opportunity when you love music so much to get a position in music is brilliant,” he said.