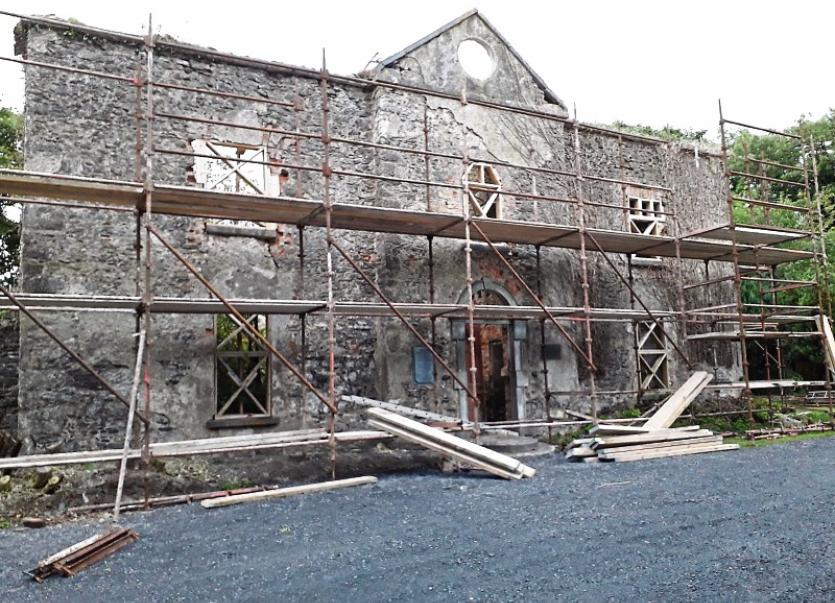 A new fundraising initiative is underway to help fund the second phase of renovation work on the Tenakill House Restoration project.

The house in Raheen fame rests in the fact that it was the family home of the most famous family of Laois patriots the Lalors.

The best known is James Fintan Lalor who was an inspiration to many who fought for Irish freedom. The family also have strong links to Australia where they played a big role in Australia fight for independence.

A team of specialists moved on to the site on Monday, September 10 and began erecting scaffolding with restoration work commencing the following day.

“We are delighted with this progress. We have set out a plan to undertake a certain aspect of the restoration each year and that way the project will not be too daunting. If you were to have the entire project in mind the whole time it could be self-defeating but bit by bit it will be completed” said Kevin Lalor- Fitzpatrick, Chairperson of the Tenakill Restoration Committee.

He said he was greatly encouraged by the interest of Laois County Council in the project and the grant assistance which the council has given the committee over the past two years.

“Catherine Casey, the Council’s Heritage Officer has been of great assistance to the committee not only through the grant allocations but also with her expert knowledge of similar projects throughout the country and the skilled companies and their craftsmen who undertake the work”, Kevin added.

The first phase of work which was undertaken last year involved putting struts in the window spaces as the lintels and brickwork surround in these areas were both in a state of advanced deterioration and were in danger of collapse at any time and particularly in times of storms involving high winds and heavy rain.

The phase which is now commencing will see the removal and replacement of the damaged brickwork and lintels.

“This is a time consuming and very difficult, delicate and intricate type of work and of course it is also very expensive” added Mr Lalor-Fitzpatrick.

The company undertaking the task is Heritage from Dovea, Co. Tipperary headed up by Patrick (Noel) Ryan. His company has been involved in the restoration of some of the most historic landmarks in Ireland such as The Rock of Cashel, Roscrea Castle, Damer House in Roscrea and the Famine Warhouse 1848 which was the scene of the Young Irelanders attempt to stage of bloodless revolution to overthrow British rule in Ireland.

The brothers, James Fintan, Richard and Peter Lalor were involved in this abortive event and James Fintan was consequently incarcerated in jails in Nenagh and Dublin for a total of six months.

“We are delighted to have secured this contract on what must be one of the most historic homes ever in Ireland from a nationalist perspective and certainly when completed it will give Co Laois a structure and a tourist attraction of which the county can be immensely proud,” said Mr Ryan.

“The house will certainly be the envy of many counties because of its uniqueness from both a historical and architectural aspect. It is a Georgian structure which I believe will be 250 years old in 2020.

“But it has a history that is unique in that it produced a father and three sons who had a huge impact not only on the history of Ireland but on the history of Australia and the eventual self-government of that continent.

“There are not many politicians who can claim such an accolade as playing such a major role in assisting a continent on its way to self-government. It is a great honour and privilege to be selected for the work on this historic house,” said Mr Ryan.

Kevin and his wife Mary, current owners of the property, have made a very substantial financial contribution to the restoration project.

“Funding for projects like this is always a major headache. There is always the shock element in that unforeseen problems can and will arise, and each and every one of such problems means more costs” added Kevin.

At the recent successful open day at Tenakill House, held in conjunction with the National Heritage Council’s Heritage Week, a major fundraiser was launched by the newly elected chieftain of the O’ Leathlobhair (Lalor) clan, Mary Lalor Carmody, who is also Joint Treasurer, with Tom Lawlor, of the Tenakill Lalor House Restoration Committee.

This fundraiser is the “Sponsor A Slate” initiative in which the Tenakill House Committee is inviting members of the public, small and large businesses, organisations interested in heritage, both at home and abroad, to purchase a slate/slates, for €5 (five Euro) each. Of course, purchasers are not confined to one slate but may purchase as many as they like.

In return for making a contribution, sponsors will receive a special certificate and their contribution to this important restoration event will be recorded in the Roll of Honour which will be on permanent display, for posterity, in Tenakill House when the restoration work is completed.

Slate can be purchased through Paypal to: Tenakillhouserestoration@gmail.com

Alternatively, payment can be made through Bank of Ireland, Portlaoise.

The fundraisers say sponsorship would be a nice gift to send to a relative as a Christmas or birthday present and thus have their name enshrined for posterity as helping to restore the most remarkable landmark historic nationalist house in the midlands, if indeed the entire island of Ireland.