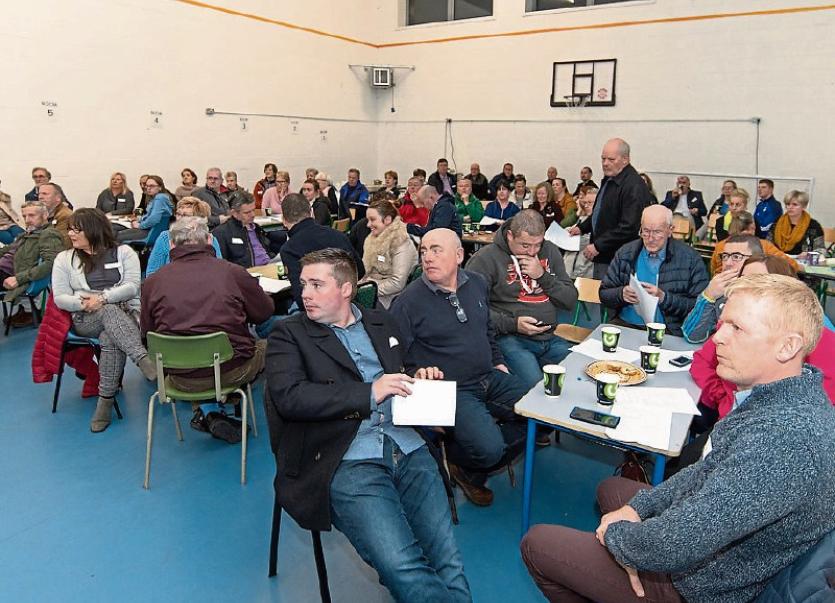 Stradbally residents in Laois have listed shortcomings that must be addressed to allow their town to grow and thrive, to retain its young population, and to keep businesses and shops open.

A crowd of over 70 residents and representatives of clubs and groups, filled St Colman's National School hall for a workshop last Wednesday night October 17.

It was organised by the recently formed Stradbally Community Development Association.

The association is drawing up a five year plan for Stradbally's development that will help to attract future grants, and is asking the community for their input.

Top of the requirement from locals is for a community hall large enough to cater for the many sports clubs in the area.

Yvonne Hennessy is a committee member of the SCDA.

“The GAA has no hall, neither does Timahoe Ladies, we have so many clubs here but nowhere for them, St Mary's Hall is too small,” she said.

Locals also want a community centre that can offer facilities for groups, information on clubs and activities and a place to meet up.

“We have to get a community hall in the town for the youth,” said a spokesperson from one table, to applause from everyone.

“Our village is crying out for a community centre, tonight is the kick in the tail we need,” another person said.

Also noted was a lack of networking and cohesion between all the different groups, residents associations and clubs.

“Other towns are better organised at coming together,” said a re from Phelan's shop.

It was also noted that few young people were at the workshop, and that their input to the plan was essential for its success.

“It's a town with potential but it needs more young people to get involved,” said John Murphy from Stradbally Tidy Towns.

However he was delighted with the full turnout.

“We are more than delighted at the wide range of groups, it shows great interest in developing Stradbally,” he said.

Among the clubs who came on the night was Stradbally Town soccer club. Chairman James Buggy told the Leinster what is priority for them.

“We badly need facilities for kids and parents to get involved. We are leasing land for the last 40 years from Thomas Cosby. Only for him we would have nowhere to play football but it's costing us huge expense,” he said.

Their 70 members have a prefab to change in, with no showers.

“Money doesn't filter down in the FAI like it does in other sporting organisations, so we have to fundraise locally and rely on support of businesses,” he said.

Stradbally also has many elderly residents who bought homes in Droimnín Retirement Village, who came to the public meeting.

“There is no community centre for us to gather at, for people new to the town like ourselves. There is a lack of communication,” said a lady in their residents association.

“The town needs money to develop for clubs across the board, from youth to old age, there needs to be more inclusion,” said another.

“If the vacancy rate goes up, it can be a death spiral,” warned town developer Cllr Andrew Montague from Sayal Consultancy Services, hired by the association to form the plan.

The vacant convent in the town centre is also a concern. A sale is almost complete and the SCDA say they are working to help see it sold.

The Stradbally public have suggested converting derelict buildings into offices and homes.

Their suggestions include a 'shop local' ethos, an upgrade of water services, the slowing of N80 traffic through the town, the creation of a local service directory, and to sell the town better online.

The aim is to use the Stradbally Development Plan to help the town to get its fair share of government grants. The plan is expected to be largely ready by Christmas.

“I'm hoping that Stradbally can apply for funding next year and get a slice of the cake that you deserve,” said Sayer's Sean Crowley.