Slimming World's Ingrid is worth her weight in gold, says TV host 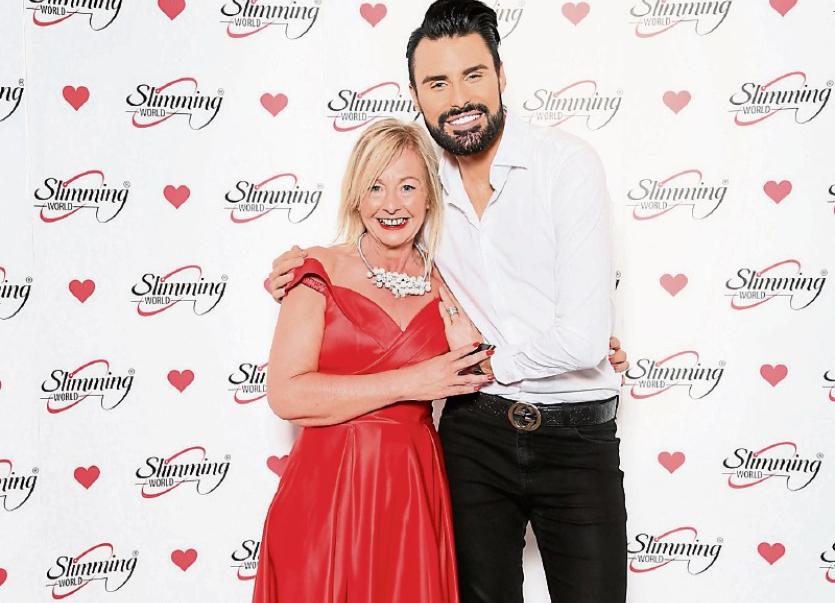 As Slimming World enters its 50th year, a Consultant from Leinster is marking half a century of success for the organisation by meeting TV personality and presenter Rylan Clark-Neal.

Rylan, who shot to fame after appearing on hit show The X-Factor, co-hosted the annual Slimming World Awards with the organisation’s founder and chair Margaret Miles-Bramwell OBE. Margaret opened her first Slimming World group in 1969 and over the last 50 years the business has grown to become the UK's leading group-based weight-management organisation, today supporting nearly one million slimmers.

Ingrid Mason, who runs a Slimming World group at The Killeshin Hotel, Portlaoise every Tuesday and Saturday, was delighted to get a chance to meet Rylan. Ingrid said meeting the TV host was a wonderful way to round off a great year at Slimming World, as well as a brilliant way to start 2019 ­– Slimming World’s Golden Year: “I couldn’t be prouder of my members, not only have they lost fantastic amounts of weight throughout 2018 – with many of them hitting their target weights – they’ve also improved their health, boosted their confidence and are heading into 2019 with new healthy habits that will stay with them for life.

“Watching people change before my eyes and start being able to do things that they didn’t think possible before losing weight absolutely amazes me. Every week I feel privileged to play even a small part in supporting people towards these achievements and to celebrate with them, so I felt especially honoured to represent my members at the Slimming World Awards. Rylan was blown away by the difference Slimming World makes to people’s lives too.”

Rylan, who is now a seasoned presenter having appeared on This Morning and Channel 5’s Big Brother’s Little Brother, said he was thrilled to meet Ingrid at the event, which was held at Birmingham’s International Convention Centre.

“I met so many people who had lost incredible amounts of weight and made a huge difference to their lives. While the stories I heard were obviously very personal, the one thing they all had in common was how much support they received from their ‘Slimming World family’ and how so many of them were achieving their dreams. Every one of them spoke passionately about how they couldn’t have made those changes to eat more healthily and become more active without the support of their Consultant and group every week, so people like Ingrid are clearly worth their weight in gold,” he said.

Ingrid continues: “2018 has been a brilliant year for Slimming World. We’ve launched our Slim for Life plan to give even more support to our target members, and won awards for both our magazine and food range. We’re hoping our Golden Year will be even more successful and we have a string of exciting activities planned to celebrate our 50th birthday in style, including the launch of brand-new websites and apps, golden events and special publications.

“So, this New Year I truly believe that joining a local Slimming World group is the best way for people to lose weight, learn new habits and make long-term healthy changes. Thanks to our eating plan they’ll see big results on the scales without ever having to feel hungry or deprived, and at the Portlaoise group they’ll discover a whole world of support and advice that’s sure to help them achieve their targets – and have a lot of fun along the way too! I’d love for anyone who wants to make a change to join us at The Killeshin Hotel, Portlaoise every Tuesday and Saturday, I promise they won’t look back!”

To make your weight-loss dreams come true and go for gold with Slimming World in its Golden Year call Ingrid on 0868040285 or visit www.slimmingworld.co.uk to find your nearest group.