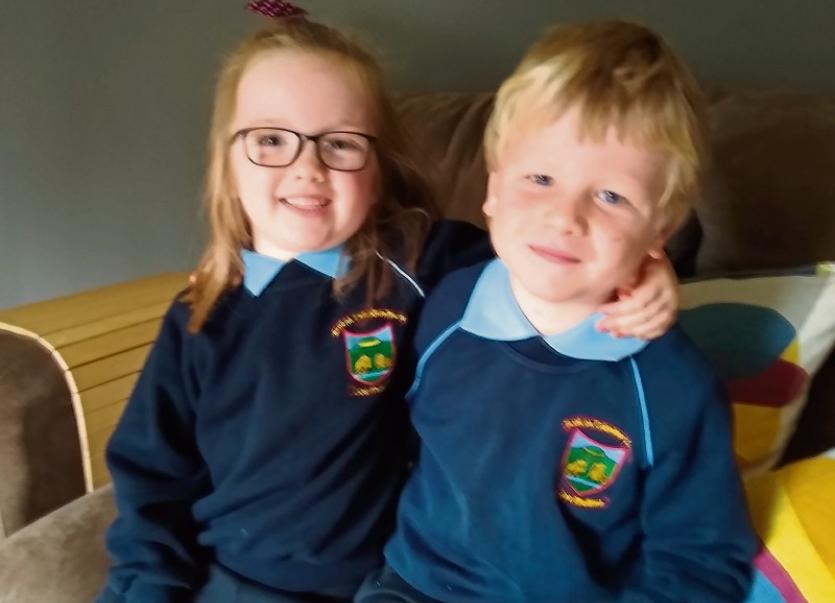 Sarah and Aidan Chambers all set for school

'You don’t need to stay, I’m fine'. The words of the four and a half year old that I worried wouldn’t be ready for school this month. My baby, my Sarah, has entered the world of education and she literally didn’t look back.

I was going to write about her starting school in last week’s column but I couldn’t bring myself to do it. I was slightly teary about the whole thing if I’m honest.

On one hand I was delighted that the two of them are now off at big school but on the other I was sad that my baby is gone.

She’s fiercely independent and I’m really happy that she is but the selfish side of me wanted her hanging from my legs refusing to go in. There wasn’t a cats chance in hell she was going to do that though!

All summer she talked incessantly about starting big school and she counted down the days until August 29 came. She had her school bag and pencil case ready weeks in advance. She even told me what exactly I had to put in her lunch box on the first day.

Her closest friend from montessori was also starting with her. I found out before she started that they actually weren’t in the same classroom.

I dreaded telling her because I thought she would have been devastated. I need not have worried. She shrugged her shoulders when I informed her and went about her business.

Between montessori and football training she knows plenty of her classmates thankfully. And it didn’t take her long to introduce herself to the ones she didn’t. She’s a yappy little thing after all!

Her new teacher is the bees knees according to Sarah. She’s kind, she’s fun but best of all, she has a bubble machine. The other teacher (the special needs assistant to you and me) is called Betty I was told and apparently she’s lovely too.

Poor old Betty had to correct me the other day. Betty is, in fact, Bridget but we won’t hold that against little Sarah. There’s a lot to take in when you start big school after all!

There’s seven girls and 13 boys in her class and she’s not overly impressed by that. According to her it’s not fair that there’s more boys. Everything must be even in her mind.

What she is impressed by is the fact that there’s a boy in her class called Aidan. She’s never met anyone else with the same name as her brother. I’m fairly sure she has but that’s what she’s insisting at the moment and to be honest I don’t like arguing with her.

Her cousin (actually her second cousin) is also in her class and loves to let people know that.

Said cousin went to a different playschool and doesn’t know our Sarah overly well. However that doesn’t stop her letting on that they are joined at the hip, best buddies but I’m not so sure the cousin lad cares too much about Sarah.

Break times are the most fun apparently. She gets to play in the yard with her best friend from montessori then. All is well in the world when these two little women are together.

The bond they have is unreal. They only know each other a year but listening to them, they are like two old women who have been friends for around 30 years! It’s awfully cute I must admit.

Homework hasn’t happened yet. She is dying to get it. The level of excitement when they got to do the first page of their phonics workbook was off the scale. S was the sound she was doing. Teacher made them tell her all the words they knew that begin with the S sound.

I got the full run down that night when I was putting her to bed. Sun, soup, sister, Sarah, Seamus, Sally … She went on. And on. And then on some more after that too.

Bedtime is when she spills all the beans about school. Some parents get no information from their children about school but not me.

I get a blow by blow account of everything, down to what colour the walls are in the bathroom.

I’m told what clothes her teacher wears every day and how pretty she is. I’m told the girls from fifth class are allowed to take her to the toilet if she needs to go during break time.

She tells me the principal’s voice come into the classroom through a magic radio (otherwise known as an intercom!). She can’t tell me what he says over the intercom though because, ‘I don’t know what adults are talking about half the time’!

I wonder will she always love school so much? I doubt it. I doubt she will be disappointed when she doesn’t get homework for long. I doubt she’ll cry on a Saturday morning when she discovers there’s no school all that often.

At some stage, like it did for us all, going to school will become a chore. For now though I’m really enjoying seeing her taking it all in. I love her love for it. She was well ready after all.