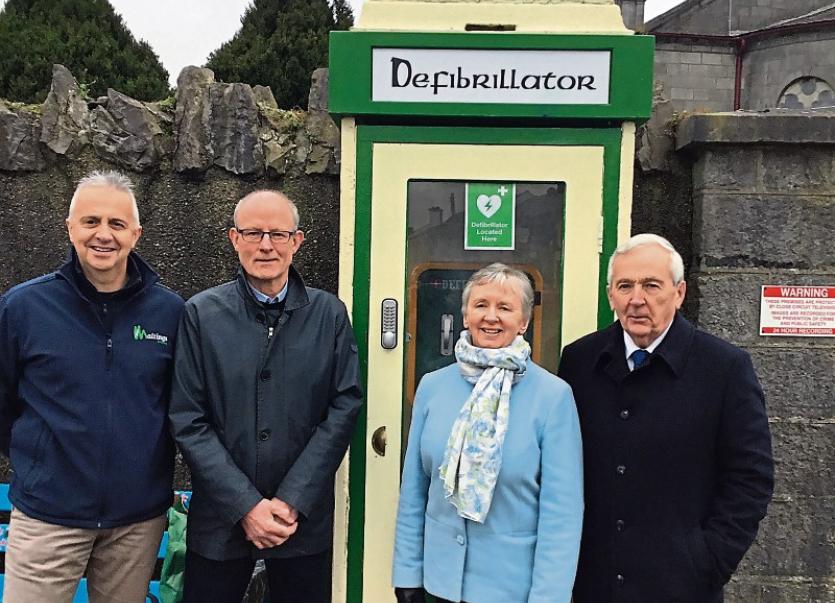 Derek Phelan, Seamus Moran, Sheila Coyle and Peter Naughton of the Laois Defibrillator Project at the restored telephone box that will house a life saving device at Market Square Portlaoise.

January marked another milestone in a project that will save Laois lives with the installation of a new defibrillator in Portlaoise.

The publicly accessible device has been installed in a reconditioned P&T telephone box outside St Peter's Church on Market Square. The box was donated to the Laois Defibrillator Project by Mary and Pat O'Regan from Errill. It was in a shed for 20 years.

After a big refurbishment at McKeon Stone in Stradbally, the box was placed in position in January. The defibrillator device was installed shortly afterwards and is now available 24/7 to provide life saving help to someone who has suffered a heart attack.

“About 15 months ago a man collapsed in Main Street Portlaoise with a heart attack but nobody knew where to access a defibrillator,” said Mr Peter Naughton, a retired surgeon at Portlaoise hospital.

The incident led to Mr Naughton teaming up with three other people around Laois to form the Laois Defibrillator Project. Mr Naughton, Sheila Coyle from Mountmellick, Derek Phelan from Emo and Seamus Moran from Rathdowney, set about their work with three aims.

The first was to map and draw up a database of public and private defibrillators around Laois. This involved committee members covering the highways and byways recording the location details of the defibrillators.

The second was to provide devices in areas and communities which had none. The third aim was to provide training in CPR and the use of defibrillators.

They found that three towns had no 24/7 public defibrillator. These were Portlaoise, Stradbally and Rathdowney.

Prior to the project, Mr Naughton said they were of little use to somebody in an emergency because the ambulance service did not know where they were so could not point people to the location.

All the data gathered about the location of the public and private boxes is also being provided to the National Ambulance Centre in Dublin.

“If you ring 999 or 112 and you are looking for a defibrillator in Laois they will now be able to tell you where the nearest defibrillator is,” he said.

Mr Naughton says the National Ambulance Centre has committed to providing ongoing training to people living in any town in Laois.

He said Derek Phelan has also given demonstrations and training free of charge to communities.

While all the key goals of the Laois Defibrillator Project have been accomplished, some other work is underway to cement the achievement for the community.

Claire McIntyre at Laois County Council is creating an internet map of the defibrillators for the public which can be accessed by smartphone.

She is in the final stages of completing this process. Mr Naughton expects said it will soon be available on Laois County Council's website at www.laois.ie So far, nearly 80 have been mapped.

Efforts are also being made to set up a first responder network in each Laois town.

Nothing would have happened without support from different quarters. Mr Naughton says Portlaoise Lions Club stepped in with funding alongside Laois councillors and Laois Partnership to ensure that Laois Defibrillator Project achieved its goals. He says a total of €11,000 was raised to buy defibrillators and heated boxes. The boxes allowed some devices to be moved into a public area on a 24/7 basis.

“As a result all the main nine towns in Laois now have a defibrillator 24/7 and some have four in the one town.

“Laois will be the first county in Ireland to have this mapping and defibrillators in every town and village available 24/7,” he said.

Mr Naughton said a further six villages have a defribrillator 24/7.

Mr Naughton says it is a focus point for the Laois wide project that raises awareness of defibrillators among other communities.

Mr Naughton thanked the Regan family in Errill for donating the box, Niall Kavanagh and all at McKeon Stone for its restoration and John Killeen of Killeen Engineering in Portlaoise for their work on the project.

He thanked Brian Kelly from Ballymaddock for carpentry work and locksmith Jack Nolan. Deirdre Holland at Laois Pharmacy has supported the CCTV and defibrillator connection. Laois Age Alliance and the Portlaoise Lions Club were also thanked.

“All of these people worked voluntarily on the project. It is amazing really,” said Mr Naughton.

If somebody wants to organise training or add their defibrillator's location to the database they contact Claire McIntyre at Laois County Council.